Billionaire Mario Gabelli: Valuations in China are getting quite interesting

Gamco Investors chairman and CEO Mario Gabelli explains how China’s economy could suffer from unwinding its zero-COVID policies on ‘The Claman Countdown.’

The Chinese government is shifting back to growth mode, as a rapid deterioration in economic conditions prompts alarmed officials to turn more of their focus to development after years of criticizing cadres who gave priority to growth at the expense of social stability and fiscal prudence.

He Lifeng, who was added to the Communist Party’s top policy-making body, the Politburo, at a party conclave in October, is drafting a growth plan of more than 5% for next year, according to people familiar with the matter.

In an internal meeting shortly after the Communist Party congress, Mr. He, as head of the National Development and Reform Commission, China’s top economic-planning body, called for policies to ease Covid controls, boost the real-estate sector and re-instill confidence among entrepreneurs, the people said. 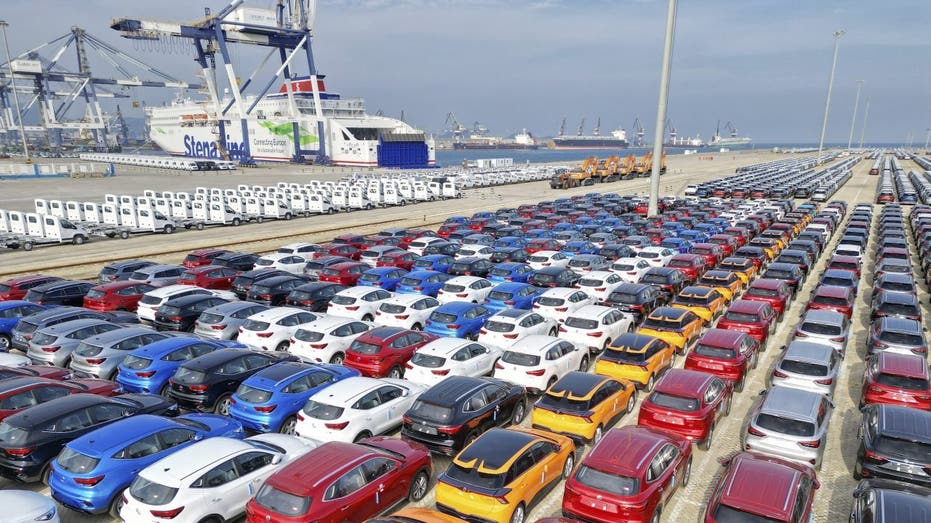 New vehicles are parked for ready for export from a dockyard in Yantai in eastern China’s Shandong province on Oct. 13, 2022. China’s economic growth accelerated in the latest quarter but still was among the slowest in decades as the country wrestled (AP Newsroom)

Some of those Covid and property-sector measures have since been implemented, leading to the current wave of Covid-19 infections and a slowing of the recent decline in housing prices.

Separately, government officials in recent weeks have begun re-examining policies for the technology and education sectors—two of the hardest-hit targets of recent regulatory campaigns—and are preparing to wrap up long-running investigations against internet companies. One such move would allow ride-hailing company Didi Global Inc.’s mobile apps to be restored to domestic app stores, according to people familiar with the issue. 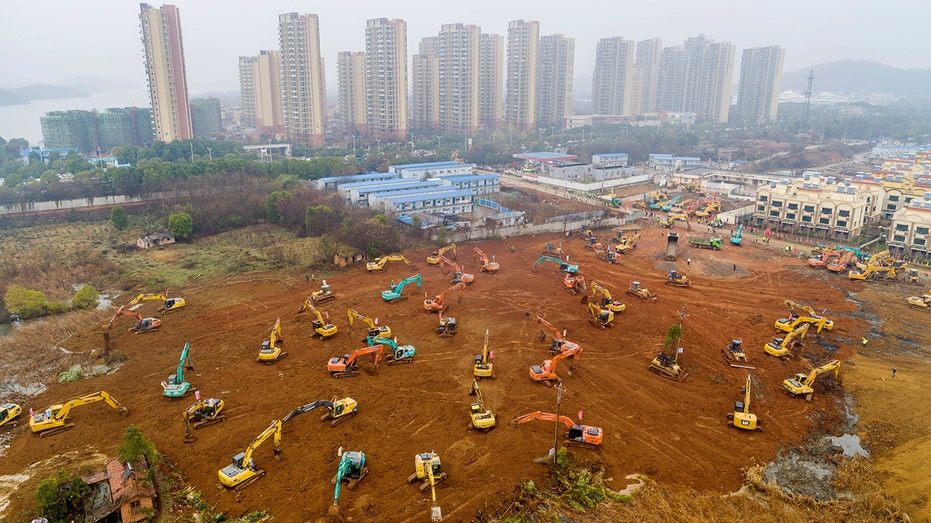 Heavy equipment works at a construction site for a field hospital in Wuhan in central China’s Hubei Province, Friday, Jan. 24, 2020. China’s slowdown in property prices showed some signs of easing after property-sector support measures were unveiled

Setting an official target of gross-domestic-product growth of more than 5% next year is a relatively ambitious goal given the myriad uncertainties around China’s exit from zero-Covid and battered sentiment in the housing market. The robust target points to rising concern among senior leaders that a prolonged sharp slowdown could undermine a central pillar of the Communist Party’s legitimacy.

Some Wall Street economists are already forecasting the world’s second-largest economy to grow by 5% or more in 2023, given comparisons with weak growth this year and optimism around a lifting of Covid measures that have held back the country for three years. Standard Chartered Bank foresees 5.8% growth, while Citibank economists project GDP to rise 5.3% in 2023.

Other economists have set their expectations lower, fretting about the likelihood of a messy exit from zero Covid, and worrying about rising geopolitical tensions and continuing fallout from the property-sector woes. 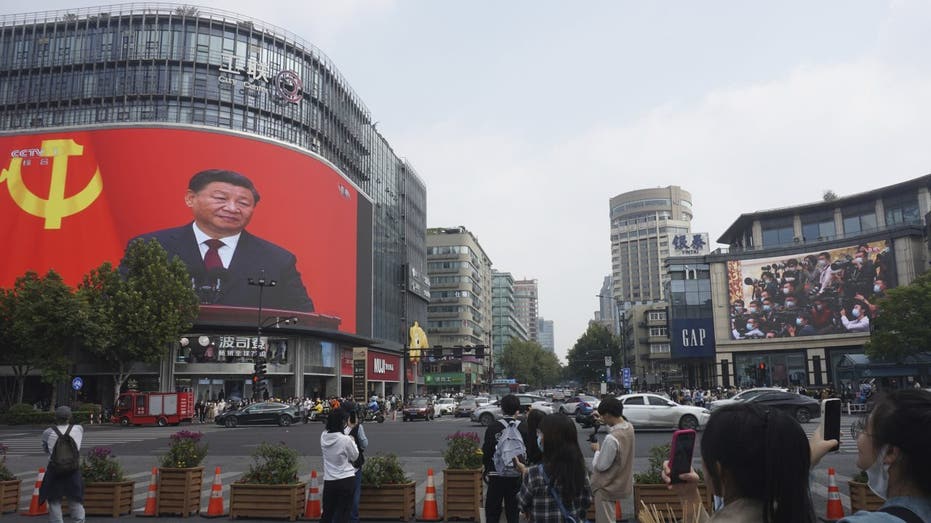 Chinese President Xi Jinping is seen at the end of the Chinese Communist Party’s 20th Party Congress on a giant screen a commercial district of Hangzhou in eastern China’s Zhejiang province on Sunday, Oct 23, 2022.  (Chinatopix via AP / AP Newsroom)

China is almost certain to miss its official GDP target of about 5.5% growth this year by a substantial margin. Most economists expect growth this year to hover around 3%, and on Thursday, China released data showing a larger-than-expected slowdown in retail sales, factory production and fixed-asset investment, though the yearlong slowdown in property prices showed some signs of easing after China unveiled property-sector support measures in mid-November.

The adjustments on Covid and housing policy, together with the internal goal of more than 5% GDP growth next year, are meant to send a clear signal to officials that economic development has risen in importance relative to ideological priorities, such as reining in property developers’ debt levels, reducing inequality and making the economy more resistant to geopolitical shocks—at least for the moment.

Officials are also retooling the Communist Party’s relationship with the private sector, which had been strained by leader Xi Jinping’s campaign to promote "common prosperity," a political slogan aimed broadly at addressing concerns about rising inequality. 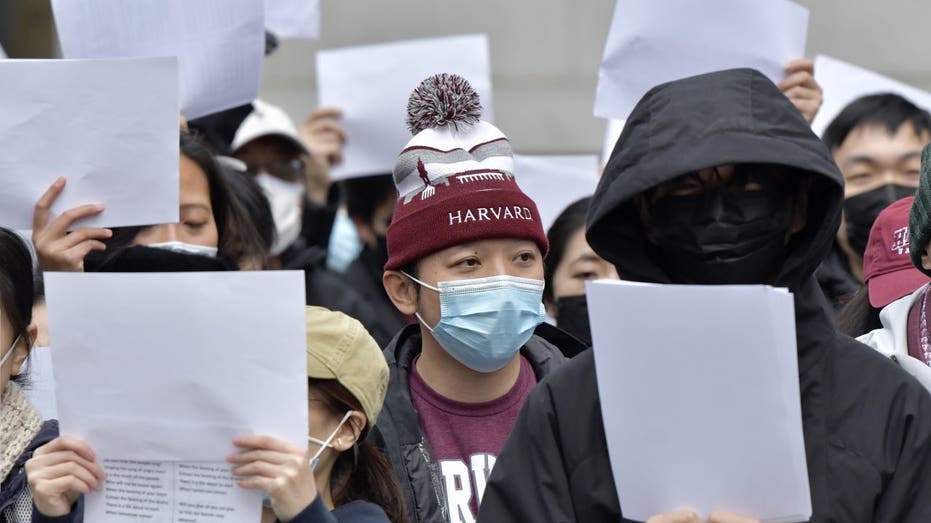 Dozens of students and faculty demonstrate against strict anti-virus measures in China, Tuesday, Nov. 29, 2022, at Harvard University in Cambridge, Mass. Protests in China, which were the largest and most wide spread in the nation in decades, include (AP Photo/Josh Reynolds / AP Images)

To do so, officials are presenting a friendlier face to the business community. Last week, government officials in the wealthy coastal province of Zhejiang, home to Alibaba Group Holding Ltd. and other corporate giants, led a delegation of local businesspeople on a six-day trip to drum up business in France and Germany. Officials from Jiangsu and Sichuan also organized similar overseas trips to hunt for trade deals.

In Guangdong, Anhui and other large provinces, officials have struck up conversations with entrepreneurs aimed at boosting their confidence in the country’s future. In the poor southwestern province of Guizhou, Gov. Li Bingjun told local business leaders this month that the government is willing to "do everything possible to help companies solve practical problems," according to remarks carried in local media.

Chinese officials last week held their first offline meeting since the pandemic with leaders from major international economic institutions including the World Bank and the International Monetary Fund to discuss China’s development and global debt issues.

"The economy is recovering and showing stabilizing momentum," Chinese Premier Li Keqiang told reporters after meeting last week with the World Bank and IMF heads. "China will keep advancing high-level opening up and steadily expand institutional opening up. We welcome more foreign investors to invest and do business in China."

The moves are part of a broader campaign by the new Communist Party leadership to reassure the domestic business community and the world that management of China’s economy remains on track, and that Beijing has the tools to avoid an even sharper slowdown in growth, according to people familiar with the issue.

Chinese leaders have been concerned that the disruptions caused by the Covid policies, along with escalating political tensions between Washington and Beijing, could lead to a broader decoupling between China and the world. Foxconn Technology Group founder Terry Gou‘s warning to Beijing that strict Covid controls would threaten its central position in global supply chains played a major role in persuading leaders to accelerate plans to dismantle the country’s zero-Covid policies, The Wall Street Journal reported.

Mr. He is tipped to take charge of the country’s economic and financial systems, an appointment that would put him in prime position to succeed Vice Premier Liu He, who has been Mr. Xi’s top economic adviser and the point man in trade talks with Washington, the Journal reported earlier this year.