The financial sector has largely underperformed in recent months compared to other sectors such as technology and consumer discretionary. However, recent price action near major levels of resistance suggests that the momentum is in favor of the bulls and that prices could be set to make a significant move higher over the final weeks of 2020.

Active traders who are looking to gain exposure to targeted segments often turn to exchange-traded products such as the Vanguard Financials ETF (VFH). In case you are not familiar, the fund comprises 415 holdings from a diverse range of segments such as asset management, consumer finance, diversified banks, insurance brokers, mortgage real estate investment trusts (REITs), regional banks, and other diversified financial services.

Looking at the chart below, you will notice that the 200-day moving average has acted as a strong barrier to rising prices for much of 2020, but the recent breakout, as shown by the blue circle, suggests that the story has now changed in the favor of the bulls. Followers of technical analysis will note the recent breakout because the previous levels that prevented moves higher will now likely reverse their roles and provide support on attempted pullbacks. Based on the chart, bulls will likely look to place buy orders as closer to current levels as possible and then protect against a shift in market sentiment or fundamentals. Depending on risk tolerance and outlook, stop-loss orders will most likely be placed below one of the trendlines or the 200-day moving average to maximize the risk/reward of the current setup. 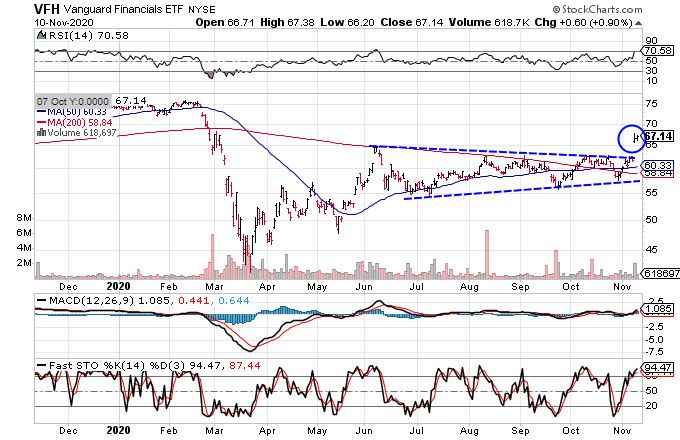 As the top holding of the VFH ETF, Berkshire Hathaway will likely start appearing on the watchlists of many active traders. The recent break beyond key levels of long-term resistance puts the momentum in the favor of the bulls.

Furthermore, the breakout from a short-term triangle pattern, as shown by the blue circle, could suggest that we are in the early stages of a rapid move higher. Followers of technical analysis will most likely buy as close to the support levels as possible and protect against a sudden selloff by placing stop-loss orders below the psychological $200 level, which just recently propped up the price on a short-term pullback. 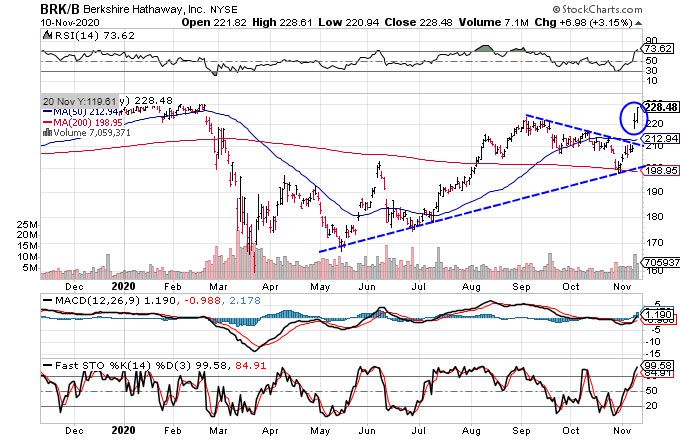 Because of Berkshire Hathaway's long history of operating success and keen investments, the company has grown into the ninth largest public company in the world in terms of market capitalization (as of June 2020). Berkshire's stock trades on the New York Stock Exchange as two classes – A shares and B shares. Class A shares trade for $343,000 per share as of Nov. 10, 2020.

Another top holding of the VFH ETF that could capture attention of active traders over the days ahead is JPMorgan Chase & Co. (JPM). As you can see from the chart, the bulls have recently managed to send the price of the stock beyond the resistance of a short-term channel pattern.

The combined resistance of the dotted trendline and the 200-day moving average were strong enough to prevent a move higher for several months, but now that the price has closed above $105, traders will expect the trend to be dictated by the bulls. Based on this pattern, we would expect traders to set their short-term target prices near the 52-week high of $141.10 and protect against a pullback by placing stop-loss orders below $99.78. 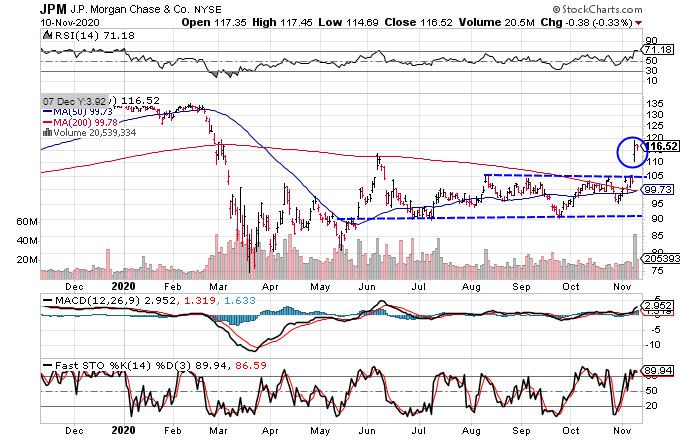 The financial sector has underperformed other sectors for much of 2020, but recent price action suggests that this may not be the case over the months ahead. Breakouts and nearby support levels will likely be the catalyst for a strong finish to 2020 and perhaps continued momentum continue into 2021.

At the time of writing, Casey Murphy did not own a position in any of the assets mentioned.