Tax experts are raising concerns about the sprawling social spending plan that President Biden outlined on Thursday, urging the White House to release additional details about the nearly $2 trillion package and the tax increases on the wealthy and well-off corporations that will finance it.

The framework that Biden unveiled costs roughly $1.75 trillion ($1,750,000,000,000), which includes funding for universal pre-kindergarten, a one-year expansion of the child tax credit, a modified Medicaid expansion and clean energy tax credits, among other things. It relies on a 15% corporate minimum tax, surtaxes on the top sliver of U.S. households, stricter tax enforcement, taxes on corporate stock buybacks and higher taxes on U.S. companies' foreign earnings.

The White House has estimated the proposed tax hikes could generate about $2 trillion in new revenue over the next year, although Penn Wharton analysts found the figure is actually closer to $1.5 trillion.

"This plan certainly appears to be a complete and total disaster for taxpayers," Brandon Arnold, executive vice president of the National Taxpayers Union, told FOX Business. "But it's an incomplete plan with scant details. Biden needs to finish his homework and answer some tough questions before flying off to Europe."

In the framework rolled out on Thursday, Biden proposed a temporary, one-year extension of the expanded child tax credit, which provides up to $3,600 per child to families. The White House estimated the temporary expansion would cost about $100 billion annually, but Harold noted that Democrats and the president have pushed for a permanently expanded child tax credit, which would actually cost about $1.6 trillion. 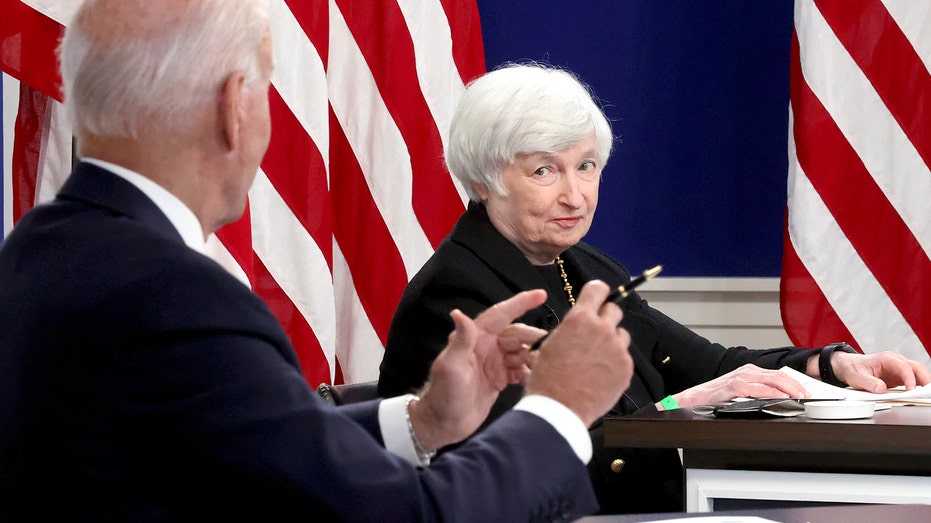 "This is a budget gimmick," Arnold said. "So Biden needs to explain if he intends to end this credit after one year, raise taxes by an additional $1.5 trillion, or borrow that money from future generations."

In fact, the bulk of the programs and spending initiatives in the bill are poised to sunset in just a few years (and in some cases – like the expanded child tax credit –  even sooner than that). But lawmakers often pass multiyear extensions down the road, even though the Congressional Budget Office – when it scores the legislation – assumes those measures will expire.

Democrats have made it clear that by taking an across-the-board cuts approach to the spending package, they intend to force a future Congress to extend popular programs in a few years (whether or not they will be able to do so ultimately depends on the 2022 midterms).

It's not uncommon for lawmakers to take this approach: For instance, in 2017, Republicans passed the Tax Cuts and Jobs Act that included several income tax provisions slated to sunset within a few years – but lawmakers indicated at the time they had no intention of letting that happen.

"This budget gimmick, which would obscure the true cost of the legislation and put program beneficiaries at risk, was rightly criticized in 2017 when used for some of the 2017 tax cuts," the non-partisan Committee for a Responsible Federal Budget said in a statement. "It would be unwise and irresponsible to use arbitrary expirations and sunsets to obscure the true cost of this legislation."

Arnold also noted the bill leaves out some key details: For instance, the Biden team projected they could raise up to $400 billion by cracking down on tax cheats and giving the IRS more funding to hire more enforcement agents, modernize outdated technology and invest in taxpayer services.

But the proposal includes no specific funding measures, and it's unclear how much Democrats intend to allocate for the IRS. Biden had previously called for about $80 billion.

Finally, it's unclear whether Democrats have reached an agreement on repealing a Trump-era limit on state and local tax deductions. Although many centrist Democrats from high-tax states such as New York, New Jersey and California have demanded that Biden's proposal include a full repeal of the $10,000 SALT deduction cap, Biden's proposal did not include such a measure.

A man enters the Internal Revenue Service (IRS) building in Washington, D.C., on Friday, May 7, 2010. Americans seeking reward money are turning in neighbors, clients and employers they suspect of cheating on taxes to the IRS at a rate of nearly eigh (Andrew Harrer/Bloomberg / Getty Images)

Households earning at least seven figures a year would receive the majority of the benefits from a full SALT repeal, according to one analysis conducted by Tax Policy Center. About 25% of the benefits would go to the top 0.1% of U.S. households, which would receive an average tax cut of $145,000, while 57% would benefit the top 1%, which would see an average cut of $33,100.

"Biden should answer some serious and important questions" about the proposal, Arnold said.