SGH CEO Mark Adams: Semiconductors are in every part of our life

President Biden will visit Phoenix, Arizona, on Tuesday for semiconductor manufacturer TSMC's announcement to increase its chip investment in the state to $40 billion.

Taiwan-based TSMC will also announce its commitment to construct a second fab that will produce three nanometer chips.

PEPSICO TO LAY OFF HUNDREDS OF WORKERS IN HEADQUARTERS ROLES

"Over the last two years, the president has been articulating a vision of an economic strategy to build from the bottom up and the middle out, as the president says. And that economic strategy is predicated on the idea that having an industrial strategy for the country is critical and that providing stable, long term public investment will crowd in private investment at historic scale," Deese said.

He also said the administration will "catalyze $3.5 trillion in public and private investment over the next decade in just the infrastructure, innovation and clean energy sectors alone."

According to Deese, Tuesday's announcement means a lot for the local community in Arizona. He said it means more workers in major factories, more opportunities for suppliers and contractors, well-paid construction jobs and opportunities for small and medium-sized manufacturers and suppliers.

TSMC said in a press release that its two fabs in Arizona are expected to create 10,000 more high-paying high-tech jobs. This includes 4,500 direct TSMC jobs. 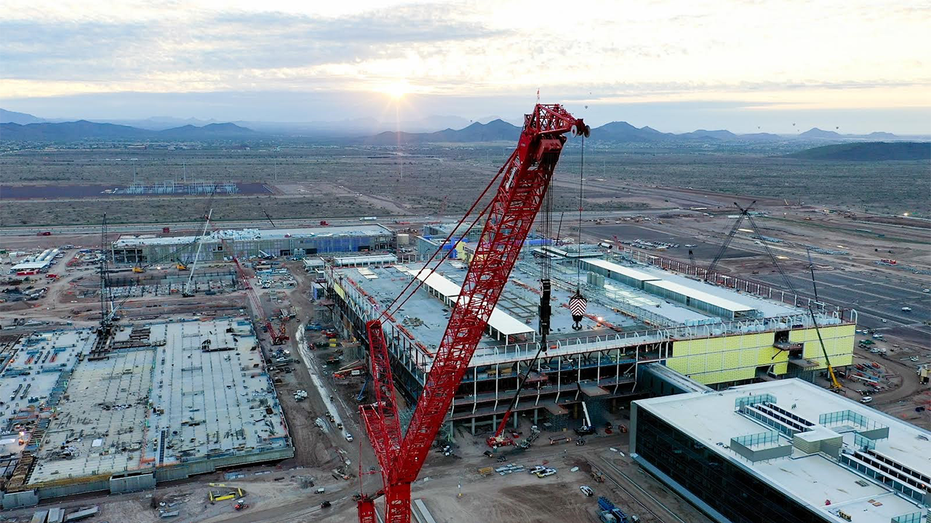 TSMC said in a press release that its two fabs in Arizona are expected to create 10,000 more high-paying high-tech jobs. (TSCM)

US, EU AGREE TO INTENSIFY TALKS ON ‘GREEN SUBSIDIES’ DISPUTE

Deese also said that companies Intel, Core Power and Corning are investing in the Arizona communities of Chandler, Buckeye and Gilbert.

"Not only marking what's happening at TSMC, but also nearby in Chandler, where Intel has broken ground on two chip fabs totaling $20 billion in investment and helping to create Phoenix as this major semiconductor manufacturing hub… and here will mark that just down the road in Buckeye, a company called Core Power is investing $1.2 billion in building a lithium ion battery Gigafactory for EVs and stationary storage," he said.

TSMC will announce its commitment to construct a second fab that will produce three nanometer chips. (Reuters/Florence Lo/Illustration / Reuters Photos)

"This is part of a boom we're seeing across the country in trying to build more of the end to end battery supply chain here in the United States," Deese continued. "In Gilbert, Corning is building a new $100 million manufacturing facility is for AT&T Fiber Optic Cable, which is connected. The president's goal to connect every household with high speed, affordable Internet."

TSMC Chairman Dr. Mark Liu said in the company's press release that when TSMC Arizona is finished, it will be the "greenest semiconductor manufacturing facility in the United States producing the most advanced semiconductor process technology in the country, enabling next generation high-performance and low-power computing products for years to come."

Biden's visit to Arizona on Tuesday comes on election day for Georgia's Senate runoff in which Republican Herschel Walker is challenging incumbent Democrat Sen. Raphael Warnock. The outcome of that race will determine if the Senate majority remains a 50-50 split or if Democrats take a 51-49 edge. Biden has been noticeably absent from Warnock's campaign in its final stretch. The campaign has instead sought more popular members of the party such as former President Barack Obama, who stumped for Warnock last week.

And while the president is making a stop in Arizona, a border state, he will likely not visit the U.S.-Mexico border amid a surge of migrant encounters under his administration.

The White House schedule states that Biden will visit Phoenix to tout his economic initiatives, but there is no mention of a stop at the border, which is just over 100 miles away.