A year ago it appeared the global economy was about to fall into a pandemic-carved abyss. Now, according to the International Monetary Fund, it is experiencing its strongest growth on record.

That global growth – the IMF has forecast six per cent this year and 4.4 per cent in 2022 – means an economic catastrophe has been averted, or at least largely blunted hasn’t, however, come without a cost. 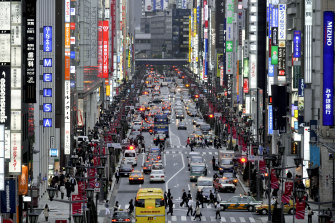 The global economy has roared back to life but debt levels are soaring. Credit:Bloomberg

The IMF’s estimate of the fiscal responses of government to the pandemic is $US16 trillion ($20.7 trillion), a number that is still rising and which may even now be conservative. It has said the peak for global fiscal deficits last year was about 14 per cent of world GDP – a 10 percentage point increase on 2019.

The four major central banks – the US Federal Reserve, the European Central Bank, the Bank of Japan and the Peoples’ Bank of China – have so far expanded their balance sheets by about $US10 trillion over the course of the pandemic.

There’s also been a surge in global debt as governments, businesses and households have loaded up with cheap borrowings, whether through pandemic-inflicted necessity or opportunism.

The Institute of International Finance estimates the pandemic has added $US24 trillion to goal debt levels so far, bringing them to about $US281 trillion in the biggest peace-time increase in debt in history. The global debt-to GDP ratio has increased by 35 percentage points to 355 per cent.

It also says government support programs account for about half the increase while companies, banks and households make up the rest. The IMF expects governments to add another $US10 trillion of debt this year.

So, while the global economy is springing back far more quickly that anyone could have envisaged last year, that recovery is being funded by massive increases in debt at every level. The response of governments and central banks to the impacts of the virus is several times larger than their reaction to the 2008 financial crisis.

Have, however, those massive injections of financial support to businesses and households and the deluge of near-costless liquidity and credit from the central banks averted the economic threats posed by the pandemic or simply deferred them?

The Bank for International Settlements – the bank for central banks – has published a series of analyses in recent years looking at the phenomenon of zombie companies, or those companies with low growth rates and poor prospects whose profits don’t cover their interest costs.

The prospect of a torrent of insolvencies and severe economic harm if rates were to rise materially or the flow of liquidity and credit were to be slowed will constrain the policies of central banks and governments for years, if not decades, to come while increasing the scale of the threat from the zombies, debt and deficits in the process.

Last month it issued a research paper that looked at a “bankruptcy gap” that has emerged globally. The number of bankruptcies since the start of the pandemic has fallen well short of the tidal wave expected.

We’ve seen that here. At their peak the major Australian banks had more than $250 billion of loans to small businesses and households where principal repayments and interest charges were being deferred. More than 90 per cent of those loans have now resumed normal repayments.

While the Reserve Bank has said business insolvencies started to rise towards the end of last year they were still occurring at well under half their rate of the pre-COVID years despite the pandemic.

The fiscal response and access to credit on remarkably cheap terms from banks that can borrow from the RBA at 0.1 per cent are the obvious explanations for the absence of the anticipated corporate blood-letting. 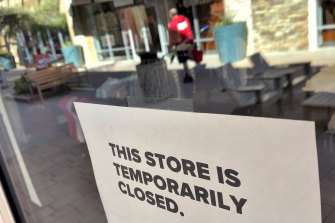 Keeping zombie companies on life support comes with a cost.Credit:AP

The BIS says the most important factor supressing bankruptcies globally has been the ample supply of credit, facilitated by unprecedented monetary and fiscal support, which had been pivotal in supporting cash flows. Companies fail because of insufficient cash flow.

“Whilst the increase in credit has prevented business firms’ insolvency in the short term, it has also increased their indebtedness,” the paper said.

“In an optimistic scenario, with the global vaccine rollout being successful, business models of the vast majority of firms in the hardest-hit sectors will continue to be fundamentally sound and cash flows will recover to pre-COVID-19 levels.

Some sectors, however, such as airlines, hotels, restaurants and leisure would remain highly dependent on additional support to avoid insolvency, a risk that would be compounded if the vaccines were less successful in containing the spread of COVID-19.

Credit has been far easier to access during the pandemic than it was during the financial crisis in 2008 and the BIS research found that borrowing for many lossmaking companies had exceeded their accumulated losses.

While access to credit may have staved off the risk that a liquidity crunch last year might have morphed into a solvency crisis, the big increase in leverage in companies incurring losses leaves the BIS uncertain as to whether insolvencies have been avoided or just postponed.

Ahead of the pandemic the BIS estimated that the proportion of zombie companies in developed economy listed markets was about 15 per cent, up from only four per cent in the pre-financial crisis era. In Australia, Canada and the US (with a relatively higher population of listed companies than Europe or Japan) the proportion was significantly higher at about 25 per cent.

That increase inevitably was due to the central banks’ responses to the 2008 crisis, with monetary policies that saw liquidity pumped into the major financial systems and interest rates fall to negligible levels, where they have stayed since that crisis.

The expansive monetary policy framework and the access to ample ultra-low-cost credit provided lifelines for companies that otherwise would probably have failed. The pandemic, and the massively increased supply of even lower-cost credit, will now add a new layer of zombies on top of those that pre-dated it. 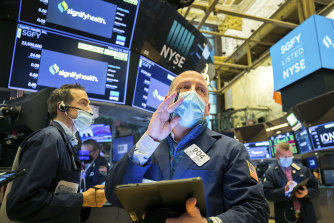 Stock markets are hovering at or around record highs. Credit:AP

Zombie companies invest and employ less than their healthier peers. They are less productive and, given their relative significance within western economies, have an impact on the ability of capitalism’s “creative destruction” to recycle financial and human capital into more productive activities.

They are effectively being kept on life-support by savers penalised by the prevailing monetary policies and by taxpayers in those instances where they have received financial support, directly or through consumption sustained by government cash.

Low rates, bank deferrals that add to their debts and programs like JobKeeper may keep them afloat, at a cost, but it doesn’t remove dead wood from the economies and indeed adds to both the zombie population and national debt burdens.

The prospect of a torrent of insolvencies and severe economic harm if rates were to rise materially or the flow of liquidity and credit were to be slowed will constrain the policies of central banks and governments for years, if not decades, to come while increasing the scale of the threat from the zombies, debt and deficits in the process.

That is a conundrum whose solution can be deferred but not easily or painlessly resolved.