U.S. airline stocks are attracting a modest bid on Monday, underpinned by rising hopes that additional government assistance will reduce layoffs until COVID-19 runs its course or an effective vaccine is manufactured. House Speaker Nancy Pelosi added to speculation about payroll support on Friday, stating that aid to airlines was "imminent." However, the President's health issues have thrown a wrench into negotiations, with the potential to upset or delay a deal.

While major airline carriers are working hard to improve pre-flight COVID screening, United Airline Holdings, Inc. (UAL) will fly just 49% of its 2019 domestic schedule in November, highlighting the chronic reluctance of travelers to board airplanes. The crazy quilt of quarantine rules around the world has made foreign travel even harder, with just 39% of United's international schedule expected to go forward.

Meanwhile, Delta Air Lines will kick off earnings season for the group on Thursday, with analysts expecting a loss of $2.93 per share on just $3.2 billion in third quarter 2020 revenue. The carrier reported a staggering 88.3% year-over-year revenue decline in July's second quarter report but noted "shoots of demand" during a mid-quarter update at a Morgan Stanley conference while admitting that those encouraging signs were "quite small."

Delta refused a federal loan through the CARES Act, instead choosing to take on $6.5 billion in debt with SkyMiles frequent flyer reserves as collateral. Delta hopes that the loan will forestall government assistance that forces warrants, equity, or senior debt commitments that may dilute current shares. However, mortgaging the frequent flyer program could backfire, lowering brand loyalty if travelers accumulating those miles get nothing for their efforts.

Dilution (also known as stock or equity dilution) occurs when a company issues new stock, which results in a decrease of an existing stockholder's ownership percentage of that company. Stock dilution can also occur when holders of stock options, such as company employees, or holders of other optionable securities exercise their options. 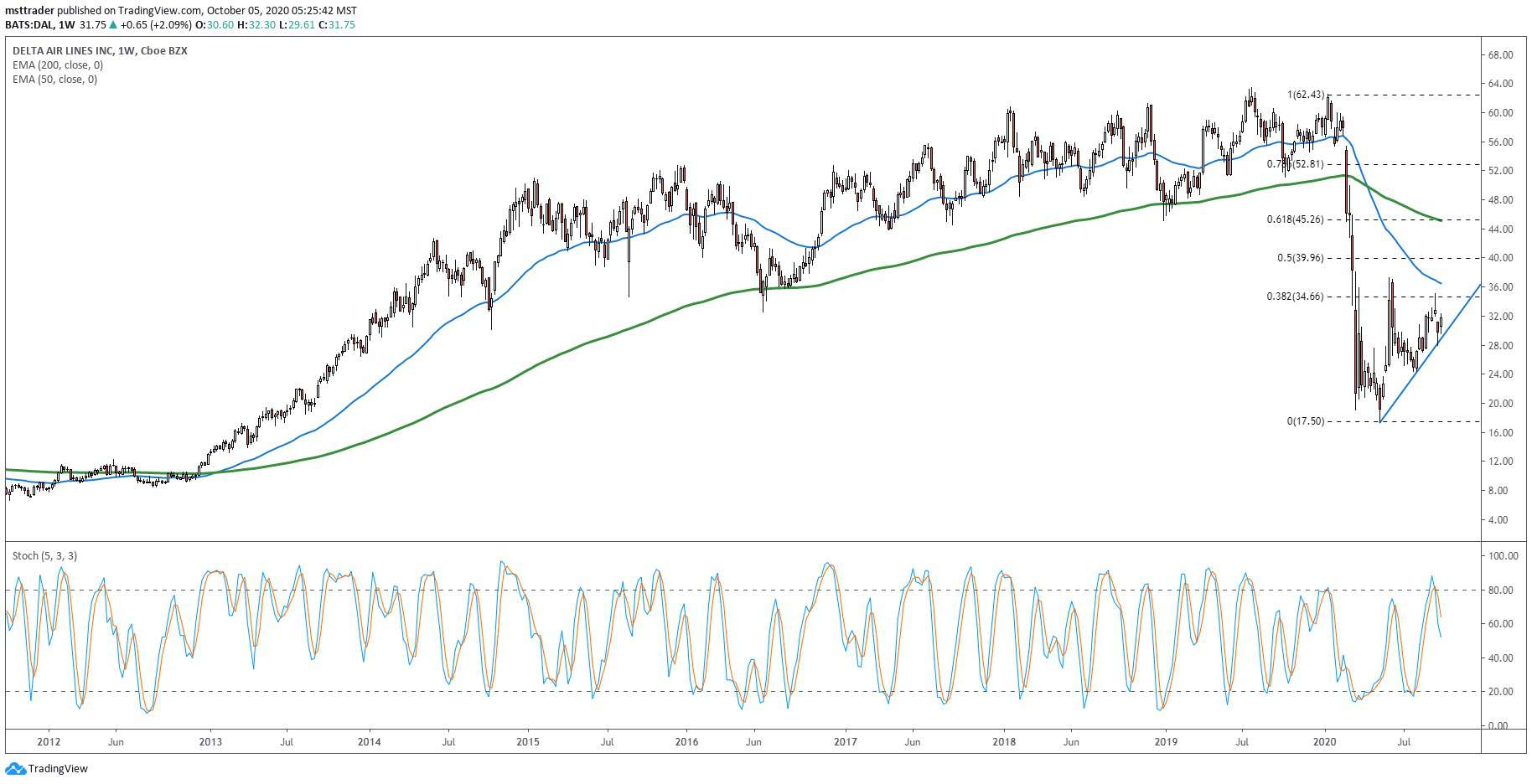 A strong uptrend topped out in the first quarter of 2015, giving way to a trading range, followed by a shallow uptick that added just eight points between 2017 and July 2019's all-time high at $62.16. A January 2020 breakout attempt failed, yielding a pullback that accelerated into a near-panic during the first quarter selloff. The downdraft found support at a seven-year low in the upper teens in March, but aggressive sellers undercut that level by nearly two points in May.

A recovery wave into June reversed at the .382 Fibonacci selloff retracement level, while a secondary bounce failed at that barrier after narrowly aligning with major resistance at the 200-day and 50-month exponential moving averages (EMAs). Support has held a rising lows trendline since May, with that price zone now aligned with the 50-day EMA. In turn, this tells market watchers that the stock may need to hold the upper $20s to avoid an unpleasant trip into the deep March low.

The weekly stochastic oscillator has entered a sell cycle that predicts weakness through the first half of the fourth quarter, while the monthly indicator is engaged in a buy cycle. Buy-on-weakness strategies should work well given this conflict, making it easier for Delta stock to challenge resistance in the mid-$30s. Even so, airline sector exposure makes little sense until we see how cold weather in the Northern Hemisphere affects virus and hospitalization trends.

Buy weakness is a proactive trading strategy in which a trader enters into long positions ahead of the anticipated reversal in a security's price. Traders will generally either go long a security, or buy call options, in a preemptive move to capture the entire expected upside.

U.S. airlines could receive additional help from the government in coming weeks, but the threat of a second infection wave is likely to limit buying interest in airline stocks.