Celebrity maths teacher Eddie Woo, host of the ABC’s family finance show Teenage Boss, feels “a teeny bit of nostalgia” about the demise of Dollarmites but believes school banking programs were “not really fit for purpose”.

The axe fell on the Commonwealth Bank’s Dollarmites program last week when NSW Education Minister Sarah Mitchell announced the end of school banking programs effective from the start of 2022. It follows similar bans in the ACT, Queensland and Victoria. 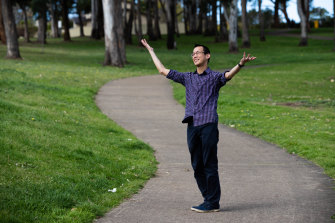 ASIC’s 2020 report on school banking programs found the banks ran the programs mainly to acquire customers and targeted young children with “sophisticated advertising and marketing tactics”, although the Commonwealth Bank disputed those findings.

Research by consumer group Choice in 2017 found 46 per cent of people got their first account with Commonwealth Bank and a third of people still had this account as an adult.

After the NSW decision, the bank announced it would close its school banking programs nationally, after 90 years of operation, and instead offer financial literacy resources online. 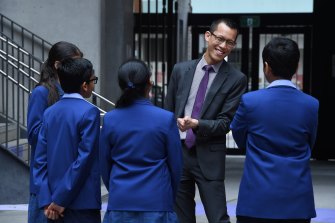 Mr Woo is a Sydney high school teacher best known for his online maths lessons on YouTube, winning multiple awards including Local Hero in the 2018 Australian of the Year awards. He hosted two seasons of Teenage Boss, on which teenagers take control of their family’s budget for a week, and which are on high rotation on ABC Me.

Mr Woo said he was a Dollarmites customer as a child but his own children, one in primary school and one in high school, were not. He believes school banking programs are less relevant now that most transactions are no longer paid with cash.

“The way we handle money is so different now,” Mr Woo said. “It’s not really fit for purpose to be putting coins into a little pouch and expect [them] to go away [to the bank] and then maybe get some stickers.”

When Mr Woo was a child he practised handling cash at the school canteen, but he makes online payments for his own children’s lunch orders. He struggled to remember the last time he used cash before deciding it was a few months ago when he put some cans in the Return and Earn recycling machine and got some coins in return.

He said children and teenagers rarely handle cash, but they are constantly bombarded with advertisements for money management apps and buy-now-pay-later services.

“It’s a huge challenge because all children, all human beings for that matter, learn through concrete objects,” Mr Woo said.

He does not give his children pocket money, preferring instead to talk through purchases as a family. However, he helps them budget money given by relatives for Christmas and birthdays.

He also recommends the kind of hands-on experience participants gain in Teenage Boss.

“It was a classic error for students to buy a certain amount of groceries to last a week, and then be rapidly shocked at the fact that it will last less than a day,” Mr Woo said. “They have a completely skewed sense of how much things cost, especially when they’re attending to a whole family’s needs.”

Mr Woo said parents also found that the process of analysing their expenditure challenged their assumptions.

Ms Mitchell said the NSW curriculum already teaches financial literacy and the government had replaced school banking with a new Treasurer’s Financial Literacy Challenge for students in years 5 to 8.

Greens MP Abigail Boyd said Ms Mitchell had taken an “irresponsibly long time to come to this decision” given the ASIC report was delivered nearly a year ago.

Get a daily update on the climate summit that will shape our future. Sign up to our Clear Air newsletter here.