New York (CNN Business)If you walk into one of 25 Fred Meyer stores in the Portland area this week, you’ll find something unusual.

Gathered together at the end of an aisle will be an eclectic assortment of about 20 products, including shampoo and dish soap, barbecue sauce, granola and more. The items are made by well-known consumer brands like Pantene, Seventh Generation, Stubb’s and Nature’s Path.
But instead of their usual packaging, these products come in glass, aluminum or heavy-duty plastic. And after you buy them, you have to bring those packages back.

The items are part of a new partnership between Kroger (KR), which owns Fred Meyer grocery stores, and Loop, a platform that partners with brands and retailers to sell mainstream products in reusable packages. 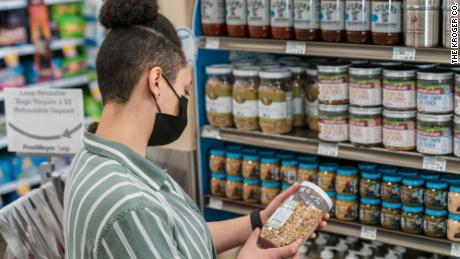 As consumers become increasingly concerned about plastic pollution and sustainability, companies are ramping up their environmental pledges. Moving from disposable to reusable packaging could help prevent more waste from piling up in landfills. But before they go all-in on such initiatives, retailers want to know if customers will buy into that solution, which requires them to fundamentally change their behaviors and spend more.

A test like this can help. “We’re eager to understand [consumer] adoption,” said Lisa Zwack, Kroger’s head of sustainability. “Is it truly something that they’re interested in? What makes it palatable to them?”
Here’s how it works: Customers who buy the Loop products have to pay for the product, as well as a refundable deposit for the packaging which varies from product to product and can reach up to about $10. Once they’ve used up the soap or the shampoo or eaten the food, they return the empty container to a bin at a participating store, and get their deposit back.
Loop products will be available at those 25 Fred Meyer locations starting Wednesday. “We anticipate the initial pilot being around six months and then from there, we will determine what any next steps or expansion would look like,” Zwack said.
Prices for Loop items are “generally a bit higher than a conventional item,” she added, even before the deposit, because they’re more niche and therefore costlier to produce, among other reasons.

Loop launched in 2019 as a global partnership that includes some of the world’s largest consumer goods companies. It was founded by Tom Szaky, CEO of the recycling company TerraCycle.
The platform started as an online store where customers could choose from an array of products in reusable containers, have them delivered to their homes, and send the empties back in a special tote. There, too, they had to pay a refundable deposit for each product. Loop worked with companies from Mondelēz (MDLZ) to Nestlé (NSRGY) to develop reusable packages for their products, and coordinated the logistics from shipments to cleaning.
The service, Szaky said, was always meant as something of a test — the real goal is to make reusable packaging as widely available and convenient as possible. Buying items in mainstream retail stores, rather than on a dedicated site, is a step forward. 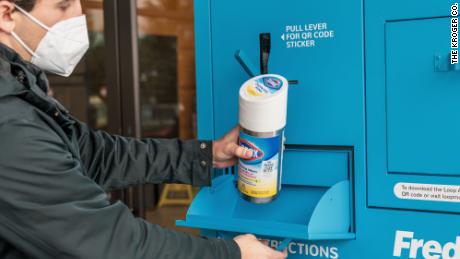 Loop has closed its online store now that its products are beginning to make their way into retailers across the world, including Carrefour in France, Aeon in Japan, and Tesco in the United Kingdom. Kroger is Loop’s first retail partner In the United States.

Reuse initiatives stalled during the pandemic, when companies suspended programs that let people bring their own containers and focused on individually packaged products. Loop felt the impact, as the pandemic snarled supply chains and delayed its launches with companies that sidelined innovation projects to focus on stabilizing their core offerings, Szaky said.
Loop is encouraged by how things are going now, even if its progress is moving slowly. Those international retailers are adding Loop products to more of their stores, although they’re still not widely available. Retailers like Walgreens are planning to start selling Loop products this year, Szaky added.
Source: Read Full Article