London (CNN Business)Americans will soon pay more for Scotch and Irish whiskies, Parmesan cheese and French wine after the Trump administration said it would impose tariffs on $7.5 billion worth of European goods.

The United States had also threatened to target pasta and leather handbags in a long-running dispute with the European Union over aircraft subsidies. Those have been spared, however.
Still, the move could trigger a damaging escalation in transatlantic trade tensions at a time when economies have been hurt by the fallout from the US-China trade war.

European Commission spokesperson Daniel Rosario said Thursday that the European Union regretted the US decision, adding that the bloc would respond with similar measures.

The World Trade Organization (WTO) ruled Wednesday that the United States could target goods from EU nations because the bloc had failed to comply with an earlier ruling regarding government subsidies for Airbus (EADSF).

The award is the largest in WTO history and the latest twist in a 15-year saga in which both Europe and America were found to have provided unlawful subsidies to the world’s biggest airplane manufacturers.
The United States on Wednesday published an extensive list of goods to be targeted, which also includes yogurt, olives, butter and sweet biscuits.
The bulk of tariffs would be applied to imports from France, Germany, Spain and the United Kingdom -— four of Europe’s five largest economies and those responsible for illegal subsidies to Airbus, US trade representative Robert Lighthizer said in a statement.
Tariff increases would be limited to 10% on large civil aircraft and 25% on agricultural and other products, including cashmere sweaters, suits and coffee. The Trump administration had initially proposed tariffs of up to 100% on a bigger list of products, and shares in Airbus and some of Europe’s top drinks groups rose Thursday. 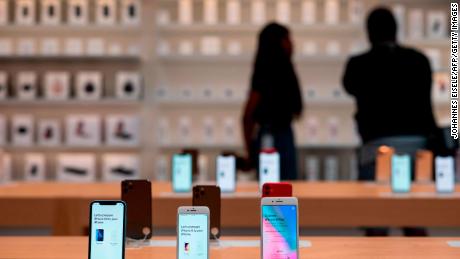 “It’s the next stage in a bubbling trade frost that isn’t quite a trade war between the EU and US,” said David Henig, director of the UK Trade Policy Project, a think tank for UK trade policy.
The US tariffs are due to begin October 18, although both sides have said they’re willing to negotiate a settlement.
“We expect to enter into negotiations with the European Union aimed at resolving this issue in a way that will benefit American workers,” Lighthizer said.
Airbus has warned that tariffs could harm its US supply chain, which it says supports 275,000 American jobs in 40 states. Nearly 40% of the company’s procurement for aircraft comes from US aerospace suppliers, the company said in a statement.
Tariffs would also put “high costs on the acquisition of new aircraft for both US and EU airlines,” Airbus said.

A blow to Scotch whisky

The US tariffs will affect less than 2% of the value of total EU exports to the United States but could deal a blow to jobs in Scotland.
“The US is our largest and most valuable single market, and over $1 billion of Scotch Whisky was exported there last year,” said Karen Betts, chief executive of the Scotch Whisky Association. Tariffs would “disproportionately impact smaller producers,” Betts said in a statement.
The United States is the most lucrative export market for EU wines and vice versa, according to the European Committee of Wine Companies (CEEV). A third of EU wine exports to the United States -— which totaled €3.76 billion ($4.1 billion) in 2018 — comes from countries targeted by wine tariffs, namely, France, Germany, Spain and the United Kingdom, the CEEV said in a statement.
Ignacio Sánchez Recarte, secretary general of CEEV, urged EU institutions to compensate sectors unfairly affected by the duties, which he said had been caused by “unrelated trade disputes” in other sectors.
Echoing Recarte’s sentiments, the secretary general for the European Dairy Association, Alexander Anton said in a statement: “I cannot see any reason to make basically the US cheese aficionados pay for the aircraft battle.”
The Office of the US Trade Representative said it could increase the tariffs at any time, or change the products affected.
But the Trump administration may elect not to do so, given the looming election in 2020 and less support among Americans for a trade war with Europe than China, said Henig.

The European Union has asked the WTO for permission to impose $12 billion in countermeasures because of unfair subsidies to Boeing, Rosario said. A list of US goods to be considered for tariffs, published in April, includes fish, nuts, wheat, cereals and sunflower oil. The WTO will determine the amount of countermeasures the EU can impose in the coming months.

The EU remained ready to work together with the US “on a fair and balanced solution for our respective aircraft industries,” Rosario added. The bloc had shared proposals with the United States as recently as July for a new regime on aircraft subsidies, but had so far received no response.
The United States has already imposed tariffs on European steel and aluminum exports. The EU retaliated in June, imposing tariffs on $3 billion worth of US goods, including motorcycles, bourbon and denim.
Source: Read Full Article