Most of the large Indian IT services players, such as TCS, Infosys, Wipro, and HCL Tech, have signalled increased offshoring efforts and opting for local hires in the US, primarily to address the immigration-related challenges. 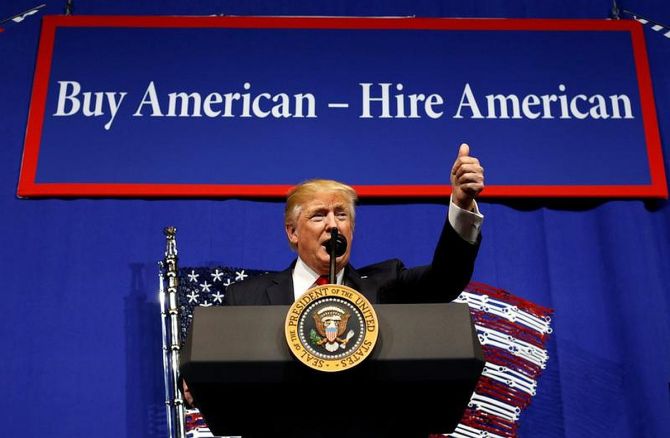 Indian IT services companies are likely to step up offshoring and local hiring in the US as wages paid to visa holders are expected to go up owing to a fresh proposal by the Donald Trump administration.

A proposal in this regard was submitted by the Department of Labour (DoL) to the Office of Information and Regulatory Affairs (under Office of Management and Budget) last week.

Though the fine print is not publicly available, legal experts are of the opinion that this would change the wage conditions of H1B, L1, and other non-immigrant visa holders.

“In absence of details about the proposed wage changes, it’s difficult to quantify impact on Indian IT companies, but it will certainly inflate cost of H1B visa talent pool and may further increase offshoring and localisation efforts of Indian IT players,” said Ruchi Burde, assistant vice-president, BOB Capital Markets.

“It appears that the DoL is increasing the wage level for H1B category of visa holders, to bring it on a par with Americans,” said Raunak Singh, founding partner, Avitr Legal.

“The rationale behind this change seems to be that the US Government intends to promote employment of Americans.

“By bringing the wage levels of H1B visa holders on a par with Americans, the employers may not get benefit of hiring foreign workers at lower wage rates.”

Most of the large Indian IT services players, such as Tata Consultancy Services, Infosys, Wipro, and HCL Technologies, have signalled increased offshoring efforts and opting for local hires in the US, primarily to address the immigration-related challenges.

Earlier this month, Infosys had said it would hire 12,000 American workers over the next two years, creating a 25,000-strong workforce in the US over five years.

Around 60 per cent of the US workforce are local hires.

The figure stood flat at 72 per cent for Infosys. TCS and HCL Technologies do not disclose the offshore revenue mix in their quarterly statements.

According to a recent HDFC Securities report, every 1 per cent increase in US onsite cost, the impact on operating margins is 27/40 basis points for tier-I/tier-II IT firms.

This is the sixth time such a rule is proposed since its first introduction in fall 2017, but it still continues to be under the same stage of the federal rule-making process.

“Considering the elections just around the corner (November 2020), there is a strong likelihood that we may see a hike in wage levels for H1B category of visa holders,” said Singh of Avitr Legal.

Industry body Nasscom has criticised the proposal, saying it alters the level-playing field for Indian IT firms.

“The changes should not come as an interim final rule (IFR) as no one has the right to comment on it,” said Shivendra Singh, vice-president and head of Global Trade Development at Nasscom.

“H1Bs, L1s, and work visas are a temporary way to bring in high-skilled visas.

“It is a trade issue and not an immigration issue as it does not alter the net immigration number.”