According to the resolution plan, the airline is planning to start with six to seven aircraft on domestic routes and looking to restart international service within six months of resuming operations. 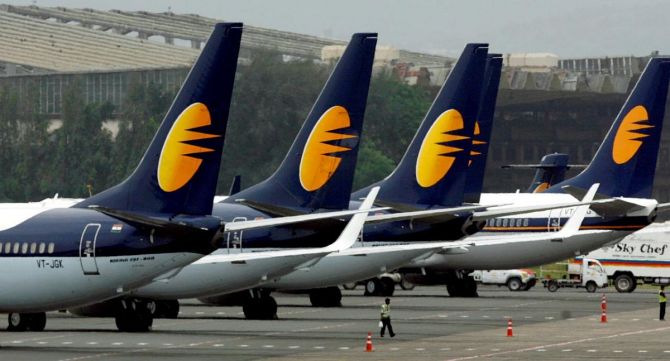 Jet Airways will have to reapply for airport slots and clear all requisite parameters for restarting operations.

Those will include security clearance for new promoters, the management, and having a fleet of 20 aircraft for being eligible to operate on international routes.

The bankrupt airline that last flew on April 17, 2019, underwent an ownership change through a successful resolution process under the insolvency and bankruptcy laws of the country.

Recently, lenders to the airline approved a Rs 1,000-crore bid by a consortium of UK-based Kalrock Capital and United Arab Emirates-based entrepreneur Murari Lal Jalan to revive and operate the airline.

“Jet Airways needs to reapply for slots at Indian airports, along with aircraft numbers and future fleet plan for applying for slots.

“It will need to apply separately to the Airports Authority of India’s slot committee and slot allocation committee of private airports,” said a senior government official.

Sources said that according to the resolution plan, the airline is planning to start with six to seven aircraft on domestic routes and looking to restart international service within six months of resuming operations.

The Kalrock-Jalan consortium is likely to pay Rs 47.5 crore as performance guarantee.

This will pave the way for resolution professional Ashish Chhawchharia to file a resolution plan for approval of the bankruptcy tribunal.

Media reports said that the airline intends to scale up to 100 aircraft in five years.

But the official said that the airline would have to fulfil the 0/20 rule to become eligible to fly abroad. It must have 20 aircraft before it starts international operations.

“There is no such provision to give relaxation on any rules to any airlines,” the official added.

Rajesh Prasad, chief strategy officer of Jet, confirmed the civil aviation ministry has been apprised of the lender’s voting for the Jalan-Kalrock consortium.

“Once the NCLT approval is received, the Kalrock-Jalan consortium will need to formally approach the ministry with its business plan and seek slots in a phased manner.

“Approval will be required not only for slots, but also for activation of its air operator permit. We expect all these to happen, so that a new script in aviation history is created in India.

“Like lenders, we hope other stakeholders will support the resolution process,” said Prasad.

When it shut operations, Jet Airways had close to 700 such slot pairs, including 116 and 214 in Delhi and Mumbai airports.

Airport slot pairs are timings granted by an airport or designated civil aviation authority for scheduled landing and departure of a flight.

The Mumbai Bench of the NCLT had earlier directed the government to offer clarity on the slots available to Jet Airways.

The government had reallocated these slots to other airlines and Minister of Civil Aviation Hardeep Singh Puri had given a statement in Parliament that it has been done on a temporary basis to prevent disruption in air transport due to Jet’s grounding.

However, the official said it will not be difficult since airlines have heavily curtailed operations after the pandemic.

“Slots even protected cannot be given on ad-hoc basis without a concrete fleet plan.

“We will need to see if the airline is in a position to use those slots,” said an executive of an airport involved in allocation.