Every political party loves to use the bait of loan waiver to woo the electorate.
If their hearts bleed for the poor, they can always use the party funds to pay off the lenders, suggests Tamal Bandyopadhyay. 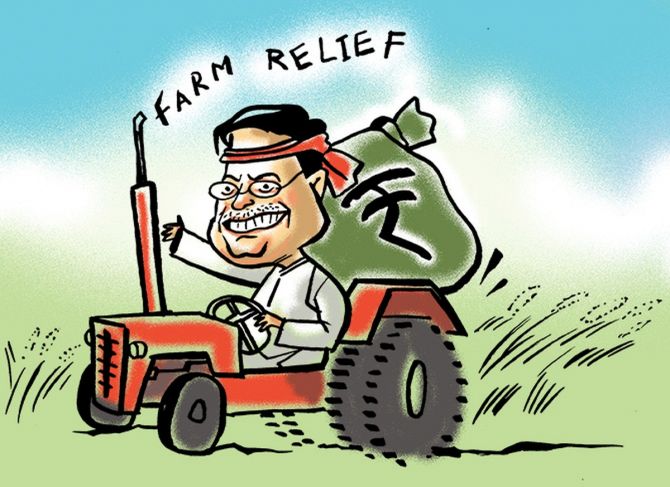 In the first week of February, while announcing the last monetary policy of the financial year, the Reserve Bank of India pitched for a uniform regulatory framework for all lenders in the microfinance space.

What’s the provocation for this? Micro lending is no longer the turf of only the microfinance institutions (MFIs), which had primarily been the case a decade back when a southern state almost dug its grave by promulgating a state law (in October 2010) to curb the alleged excesses done by the industry.

Following the recommendations of a committee, headed by noted chartered accountant and the longest serving director on the RBI board Y H Malegam, rules were framed by December 2011 to regulate the industry.

The background of revisiting the rules now is yet another law, which an eastern state has recently threatened to impose to regulate micro lending.

The December 2011 RBI norms gave birth to the NBFC-MFIs, which continued to dominate the micro lending industry for the next few years till the largest such entity became a universal bank and ten small finance banks got licence to open shops.

Then, there are pure-play NBFCs, too, which give micro loans beside the not-for-profit bodies and trusts, which have a minuscule share in the industry.

Simply put, microfinance is no longer the alcove of the NBFC-MFIs only.

Let’s take a close look at how the profile of the business and the lenders has changed over the decade. Collected from multiple sources, the data should be close to accurate.

In 2010, undivided Andhra Pradesh had the maximum share of MFI business and Karnataka, Tamil Nadu, West Bengal and Odisha were the next four big play fields (in that order), accounting for almost three-fourth of the industry.

By 2020, West Bengal rose to the top, followed by Tamil Nadu, Bihar, Karnataka and Maharashtra.

The share of non-NBFC-MFIs in the business, which was just about 5 per cent in 2010, is now 68 per cent. The NBFC-MFIs share is 31 per cent while others account for 1 per cent.

While a motley group of lenders give money to the same set of borrowers, it’s inevitable that there will be regulatory arbitrage, leading to over-leveraging of the customers.

How different are the regulations for different lenders? Not more than two NBFC-MFIs can lend to the same borrower and the overall exposure, including banks, is capped at Rs 1.25 lakh.

There is no such limit for banks. When it comes to indebtedness of a microfinance borrower, the RBI has set the limit at Rs 75,000 for the first loan, which can rise up to Rs 125,000 subsequently.

Again, this is applicable to only the NBFC-MFIs; for banks, there is no such norm.

There are many other rules, which make it an un-level playing field.

For the NBFC-MFIs, both pricing of the loan and processing fees are regulated while banks have no such shackle.

Similarly, NBFC-MFIs must give 85 per cent of their loans without any security.

Indeed, 40 per cent of loans of the universal banks must flow to the so-called priority sector or the weaker sections of society (the components of which are dynamic); for the small finance banks, such limit is even higher — 85 per cent — but not all priority loans are unsecured.

Finally, for NBFC-MFIs, the tenure of loans is capped at two years if they are higher than Rs 30,000 but there is no such restriction for other intermediaries.

When they are meeting the credit needs of the same segment — the so-called bottom of the pyramid — shouldn’t the discrepancies be ironed out? Norms for micro lending should be the same for all financial intermediaries, irrespective of the colour of their skin.

While the banks raise deposits to lend, the NBFC-MFIs depend on bank funding for their business. Banks fund this set of intermediaries as such an exposure helps them meet the priority sector lending target, which often they fail to achieve through direct lending.

At the moment, the relatively large NBFC-MFIs can charge their borrowers either a 10 percentage-point spread over their average cost of funds or 2.75 times the average of five banks’ base rate — whichever is lower.

Typically such MFIs need to keep some funds with the lenders in the form of fixed deposits (average 10 per cent of the exposure) to get loans.

The earnings on such deposits are far less than what they could have earned had they used money to lend. This cost is not factored in for loan pricing.

More importantly, is there any logic in mandating the interest rate when competition is so fierce?

While the interest rate can be left to the market, there must be uniform norms for the size of exposure and number of loans a borrower can raise to save them from being over-leveraged.

Also, instead of giving only income-generating loans, micro loans can be classified as livelihood loans — for health, education and buying home as well.

The NBFC-MFIs should be allowed higher than 15 per cent secured credit to derisk their portfolio, particularly when every political party loves to use the bait of loan waiver to woo the electorate.

Farm loan waiver has been a familiar script, but Assam has gone one step ahead. Both the ruling party and the Opposition have announced micro loan waiver in the run-up to the elections.

This is not within the RBI’s ambit, but the Election Commission must ban loan waiver poll promises by all political parties.

If their hearts bleed for the poor, they can always use the party funds to pay off the lenders.

Tamal Bandyopadhyay, a consulting editor with Business Standard, is an author and senior adviser to Jana Small Finance Bank Ltd.