With a ‘yes’ vote, there is a more foreseeable outcome, while a ‘no’ could result in greater uncertainty, for which retail investors may not have the appetite.
Sanjay Kumar Singh reports.

As directed by the Supreme Court, unitholders in the six closed debt schemes of Franklin Templeton Mutual Fund will get to vote between December 26 and 28.

A ‘yes’ vote will mean the fund house will be allowed to undertake orderly winding-up of the schemes.

A ‘no’ vote will mean the schemes will reopen.

What a ‘no’ vote means

Most investors in the six schemes are likely to apply for redemption within a day or two of reopening.

Faced with huge redemption pressure, Franklin Templeton’s fund managers will be forced to sell the debt papers held in these funds.

Many of them are lower-rated and illiquid.

“If the fund house is forced to sell bonds within a short span, it may have to accept very low valuations for them,” says Vidya Bala, co-founder, PrimeInvestor.

The extent of the write-off that may happen in a chaotic sell-off is difficult to estimate.

“An investor may vote ‘no’ if the extent of the haircut is 5 per cent, but may not do so if the haircut is 25-30 per cent or more. Unfortunately, it is difficult to estimate how much it could be,” says Gautam Kalia, head-investment solutions, Sharekhan by BNP Paribas.

Experts believe it is likely to be steep.

Thus, if a majority of the investors vote ‘no’, they will get their money back faster, but after severe haircuts.

Proponents of the ‘no’ vote believe the courts will force the fund house to pay investors based on a particular day’s net asset value.

Experts say the chances of this happening are bleak.

“These are market-based instruments. A fund house is allowed to take a write-down on debt papers in case of high redemption pressure,” says Arun Kumar, head of research, FundsIndia.

What a ‘yes’ vote means

The funds will remain shut.

“This option will give the fund house the opportunity to recover maximum value,” says Kumar.

The fund house has managed to make some recovery.

Says Santosh Kamath, chief investment officer, Franklin Templeton Fixed Income India: “Between April 24 and November 27, the six schemes have received Rs 11,576 crore from maturities, prepayments, and coupons. Four of the six schemes are cash-positive and have close to Rs 7,226 crore available to return to unitholders, subject to fund-running expenses.” 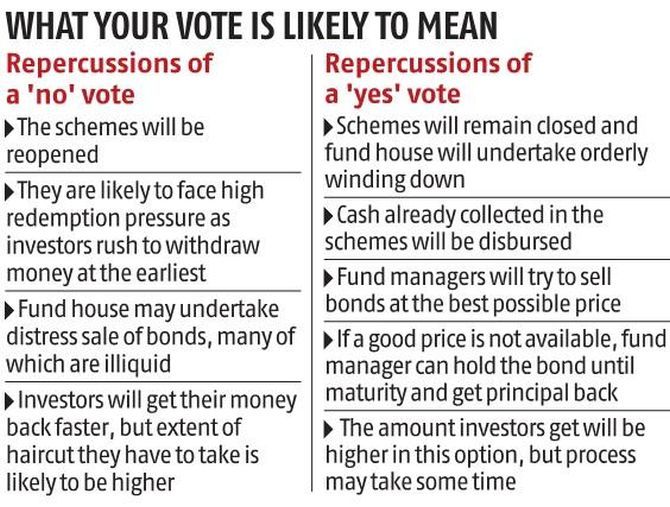 The total corpus of the six portfolios is Rs 25,442 crore, so the fund house has about 28 per cent cash in the six schemes.

In the shorter-duration schemes, it has 47-50 per cent cash.

The fund managers will try to sell the bonds held in the portfolios as soon as they get a good price for them.

If they don’t get a good price, they have the option to wait for them to mature and get 100 per cent of the principal back.

In the meantime, the interest they pay will accrue to the fund.

“The fact that the fund house is asking for an orderly wind-up indicates it is reasonably confident about getting a good deal on the bonds in these portfolios,” says Kalia.

In the ‘yes’ option, the loss to investors is likely to be negligible.

One factor that is likely to influence investors is the urgency of their need.

“Those who need the money urgently are likely to vote against the closure,” says Kalia.

Even these investors should factor in the possibility of a steep haircut.

Investors are understandably angry with the fund house for putting them through such uncertainty.

“At present, however, they should be governed by one consideration only – getting the maximum amount back,” says Kumar.

With a ‘yes’ vote, he says, there is a more foreseeable outcome, while a ‘no’ could result in greater uncertainty, for which retail investors may not have the appetite.