The streets of north London around the Tottenham Hotspur stadium are quiet. In the shadow of the gargantuan building, as though descended from space on the Tottenham High Road, business has dried up for Ali Polmaz, who runs the Spurs Restaurant kebab shop.

“It has killed us,” he said, sharpening his blade to carve doner kebab for a rare lunchtime takeaway customer. “We still have to pay rent; the landlord told me this is his only income. We want to be busy, but with no fans there is no business.”

Far from a hive of activity, the 62,850-seater stadium – expected to be a beacon of regeneration when it opened in 2019 – stands as a silent monument to Britain’s frozen economy amid the Covid pandemic. The impact has been disproportionately felt in this part of London: Haringey – the borough with Tottenham at its heart – has the fastest growing rate of unemployment in the country. 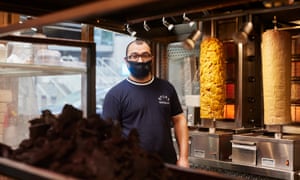 After UK unemployment hit the highest level in four years nationwide last week, the number of people claiming jobless benefits here has surged by 7.7% in the year to December – more than double the national average.

About 11.3% of the local population are now receiving support from jobseeker’s allowance or universal credit, compared with the 6.3% UK average. The number of people on furlough is also among the highest nationally, as the jobs crisis engulfing Britain claims Tottenham as its epicentre.

A giant silver monolith built alongside Spurs’ historic White Hart Lane stadium, the new £1.2bn ground had been supporting 4,000 jobs in the area before crowds were banned last March in the fight against Covid; boosting employment in restaurants, bars and the wider community of shops, pubs and cafes. But the Covid recession has hit hospitality and leisure harder than any other sector of the economy, with more than a third of the sector’s workers across the country now furloughed, and many thousands more losing their jobs.

To help it stay afloat, Spurs, one of the richest clubs in world football, borrowed £175m from the Bank of England last year. But without crowds piling in to watch the Premier League, American football and concerts – at a time when the economy is in the deepest recession for 300 years – the club scored a £64m loss for the year to June.

Paolo Povoas had been hired to work at Spurs’ stadium last March. But his first match day – a fixture against Manchester United – was among the first league games cancelled as the pandemic hit, leaving the 18-year-old out of work with no prospect of employment. 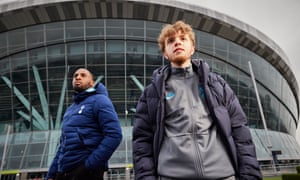 After rejection by JD Sports and several other attempts to find work in retail, he found a job at Amazon’s nearby Enfield warehouse with help from Jordan Mattis, a job coach from the Tottenham Hotspur Foundation, which helps people in the local area to find work.

“I was trying to apply for jobs but wasn’t successful. So many jobs weren’t accepting due to lockdown. When I finally started, I was happy just to know I was doing something and getting paid as well,” he said.

The scale of the jobs crisis in the area dawned on David Lammy, the shadow justice secretary and Tottenham’s Labour MP, in early April last year as queues outside food banks ballooned. “I couldn’t believe it. The queues of people, and the profile who were struggling to feed their children. It was the ordinary face of London.

“I’ve heard some commentators talking about unemployment that harks back to the 1980s, but actually I think this is way more significant.”

Tottenham had its fair share of problems before the pandemic struck. With deprivation levels among the highest in the country, it was at the heart of the 2011 London riots; triggered after the police shooting of Mark Duggan, and fuelled by a deep sense of inequality and injustice. But despite lower pay levels, issues with education and affordable housing, its proximity to central London provided opportunities for work.

This time, however, it is that proximity that is the central problem, as London’s economy collapses during the crisis. The lack of crowds down Tottenham High Road might be problematic for many, but the ghost town just 10 minutes away on the Victoria Line – usually a hub for employment – is an even bigger cause of concern for Haringey residents. 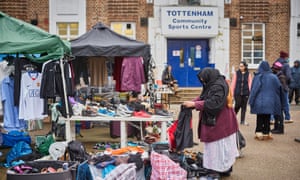 Haringey has a larger share of workers in low-income jobs in those sectors of the economy hardest-hit by physical-distancing; as cleaners in Canary Wharf, baristas in City coffee shops, Uber drivers and Deliveroo riders, or as staff in the closed shops and restaurants of the West End. While employment was higher than in similarly poor parts of Britain thanks to these opportunities before the pandemic, much was in lower-paid and precarious work that quickly vanished.

“It’s clear when you think about it, with the city effectively shut down,” said Lammy. “You realise that it’s the lion’s share of a community like mine, and it’s not surprising then that it’s BAME people, and also women and lone parents, who are unemployed or furloughed.”

Less than a year ago Haringey did not even rank within the 50 local authorities in Britain with high claimant counts. Now it sits second, just behind Blackpool where unemployment was already twice the national average before Covid hit.

Of the 10 areas where unemployment is rising fastest, all are London boroughs in predominantly poorer parts of the capital. 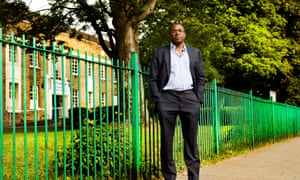 Councillor Joseph Ejiofor, the Labour leader of Haringey council, said the borough was trying hard to help residents find work through virtual Zoom job coaching sessions and other programmes, but £280m has been cut from its budget since 2010 under the Conservative government’s austerity drive.

The fastest growth in benefit claims – albeit from a low base – is in the typically more affluent area of Muswell Hill, popular with actors, musicians, media and creative industry workers.

Ejiofor said these two sides of Haringey, separated by the hills around Crouch End and the railway running north from King’s Cross, which serve as a geographic barrier to the socioeconomic split – were a microcosm of the country’s problems at large. Both are suffering, but from different starting points. “There is a real concern about where we go when furlough ends,” he said. “Part of the problem is the government talking about levelling up, they think London is homogeneous and there aren’t any issues. But we’ve got to deal with issues between the east and west of our own borough.” 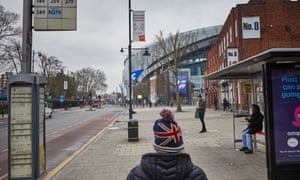 The jobs crisis comes at a delicate moment for the capital, as its former mayor, Boris Johnson, promises investment in the north and Midlands to meet the “levelling-up” campaign promise that cemented his election landslide in 2019.

While towns and cities outside the south-east entered the crisis in a worse position, Covid has hit London harder, fuelled by its dense population and higher proportion of office employees working from home. With travel, hospitality and retail jobs hardest hit, the blend of Covid and Brexit means London’s population is forecast to decline for the first time since the 1980s.

Mark Kleinman, professor of public policy at King’s College London, said the capital could still bounce back as the vaccine allows a gradual return to normality. But the early evidence is worrying.

“My kind of gut feeling is the long-term strengths of the London economy are still in place. That’s about connectivity, a highly talented labour force, the institutions and the history and its reputation. But there will be quite a lot of adjustment going on.”

“There’s no question the impact is very severe in London. And that is being lost in the wider story about levelling up.”