The stay-at-home economy caused by the coronavirus has created some major winners and losers in the new economy. In movies and media, Netflix Inc. (NASDAQ: NFLX) has won massively where the movie theaters lost an entire year and perhaps much longer. There is a growing belief that media consumption has seen a secular change and over a tipping point of no return. If that proves to be the case, and perhaps even if that view is wrong, Netflix is positioned about as well as any company in the new economy.

Now that Netflix shares have risen nearly 70% in 2020, some Netflix shareholders have at least some pause about whether or not the bar has become set too high. The stock has blown away expectations over time, and the rational argument that Netflix has continually be overvalued has simply been a fools errand.

Technical analysts might have a very different view from fundamental analysts. Netflix has run into a classic triple-top chart pattern around the $550 mark. This level was breached briefly in July, then again at the end of August and start of September, and then again in October. Fundamental analysts keep issuing higher and higher price targets and have continued to increase subscriber expectations. And they have been raising the bar to where Netflix will have to continue surprising with more and more subscribers as the company is looking at other potential premium offerings to drive revenues higher.

After adding about 15.8 million subscribers in the first quarter of 2020, followed by another 10.1 million in the June quarter, Netflix was clipped in July when its forecast was roughly 2.5 million subscriber additions for the third quarter of 2020. There is a growing theme that Netflix’s own estimate was just too conservative after ending the last quarter with over $7 billion in cash.

24/7 Wall St. has tracked an endless list of analyst upgrades and target hikes heading into earnings season. While we always warn readers to never use any single analyst call as a sole basis to buy or sell a stock, what are investors supposed to think when every single analyst alive seems to keep raising their targets?

While some analysts have been less aggressive, this is a fairly large representation of views from key firms issuing mostly positive reports ahead of earnings. Many analysts are only willing to make their changes after big news events and after earnings rather than in anticipation of the news. There is also a rising belief that Netflix will announce a stock split again.

On October 16, BofA Securities reiterated its Buy rating and raised its price objective to $670 from $575. While it sees risks to near-term subscriber numbers, it still sees 2.5 million or more additions in the third quarter and it sees a compelling long-term growth path. BofA Securities had just reiterated its Buy rating and $575 price objective on October 2.

Also on Friday, Morgan Stanley reiterated its Overweight rating and raised its price target to $630 from $600.

On the same day, there was at least one negative stance that was kept in place. Wedbush Securities maintained its Underperform rating and its $220 price target. That call was based on growth deceleration, customer churn and content delays. Despite such caution, the analyst’s estimates are not really that much lower than the consensus.

And on October 15, Canaccord Genuity reiterated its Buy rating and raised its target to $630 from $550.

Goldman Sachs reiterated its Buy rating and maintained its position on the prized Conviction Buy List on October 14, and that call saw its target price raised to $670 from $600. The move is back to the firm’s prior target ahead of the earnings report in July and this puts Goldman Sachs as the street high analyst target price. he firm does expect more churn, but believes that the estimates for the rest of 2020 are still too low.

On October 9 a call from JPMorgan lifted subscriber expectations to 5.1 million from 3.1 million. The firm sees revenues coming in at $6.59 billion for the quarter as well. JPMorgan has an Overweight rating and the firm has a $625 price objective, which it raised from $535 after the last quarterly earnings report.

On September 15, KeyBanc Capital Markets initiated coverage with an Overweight rating and a $590 price target.

Netflix is one of those stocks where analysts and investors alike seem to be playing catch-up and where it always seem to look overvalued. That hasn’t kept it nor many of the other companies looking overvalued from rising over time.

Netflix now has more than 190 million global subscribers and it’s now available in 190 countries. Many of those newer countries have a very low market penetration and could easily blow beyond the total number of U.S. subscribers in the coming years. If Netflix can continue tweaking its prices (higher that is) and looking for up-sell opportunities, its sky high forward valuations versus 2021 estimates (over 60 times earnings and over 8 times revenue) may look artificially high over the long-term picture.

A chart has been added from stockcharts.com below to illustrate how that triple top pattern has come into play above the $550 level. 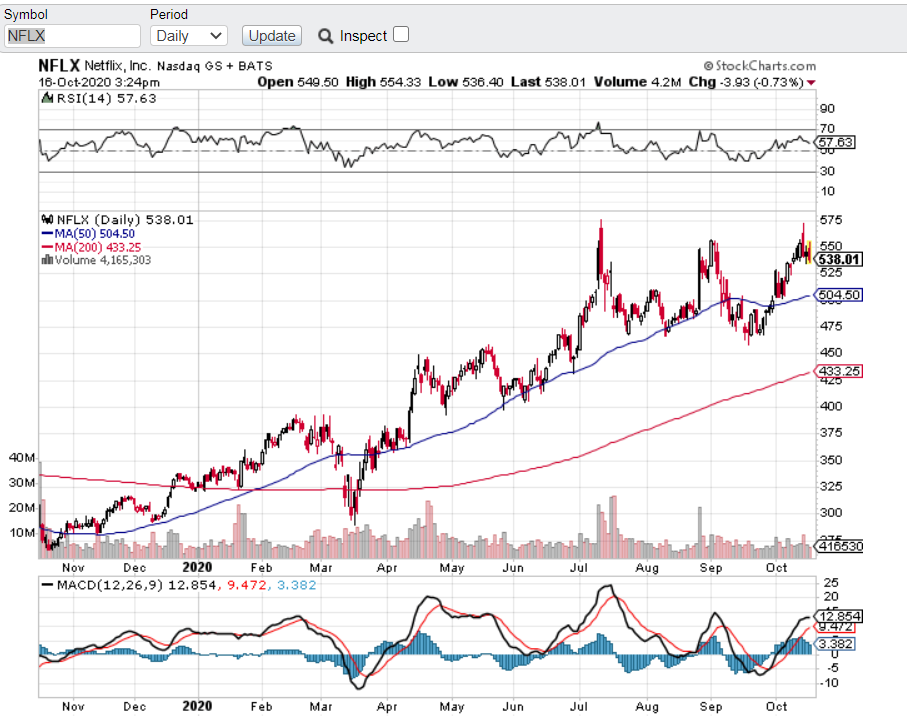