(CNN)Violent protests in Kazakhstan in recent days have seen the government resign and the declaration of a state of emergency as troops from a Russian-led military alliance head to the Central Asian country to help quell the unrest.

It’s the biggest challenge to autocratic President Kassym-Jomart Tokayev’s rule, with initial public anger over a spike in fuel prices expanding to wider discontent with the government over corruption, living standards, poverty and unemployment in the oil-rich, former Soviet nation, according to human rights organizations. 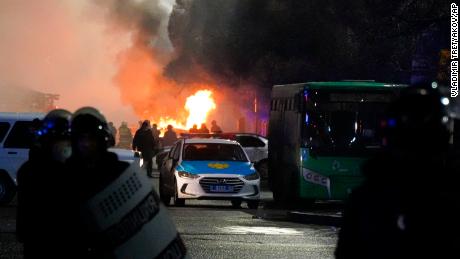 Local media reported eight police officers and national guard personnel were killed and more than 300 officers injured. It is unclear to what extent civilians have been killed or injured. The country’s Interior Ministry said more than 200 people have been arrested.

Here’s what you need to know about the unrest and why it matters. 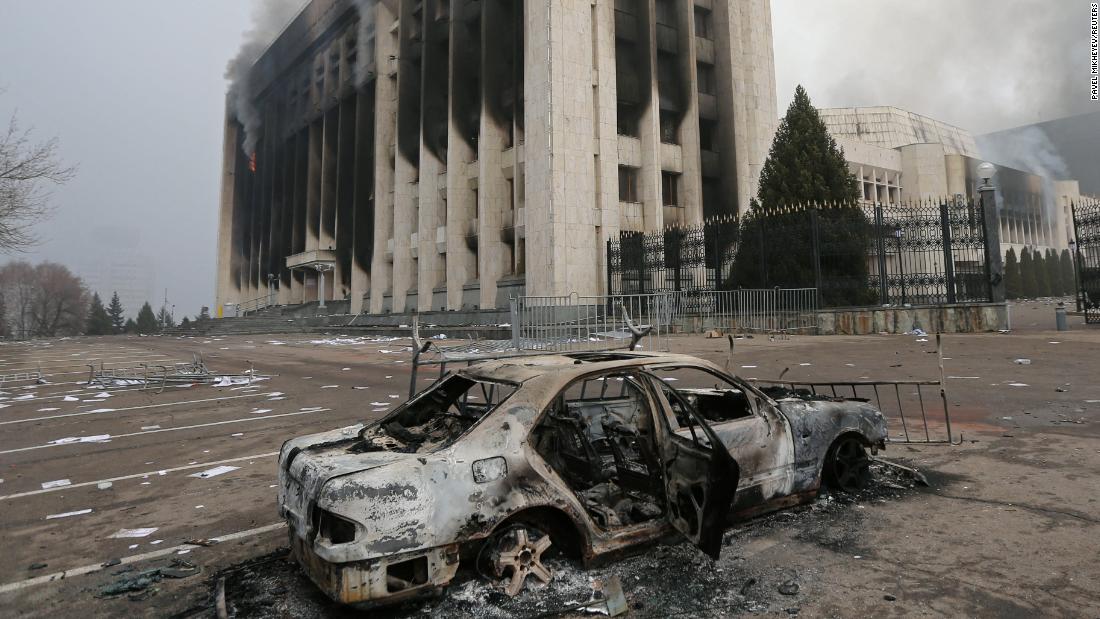 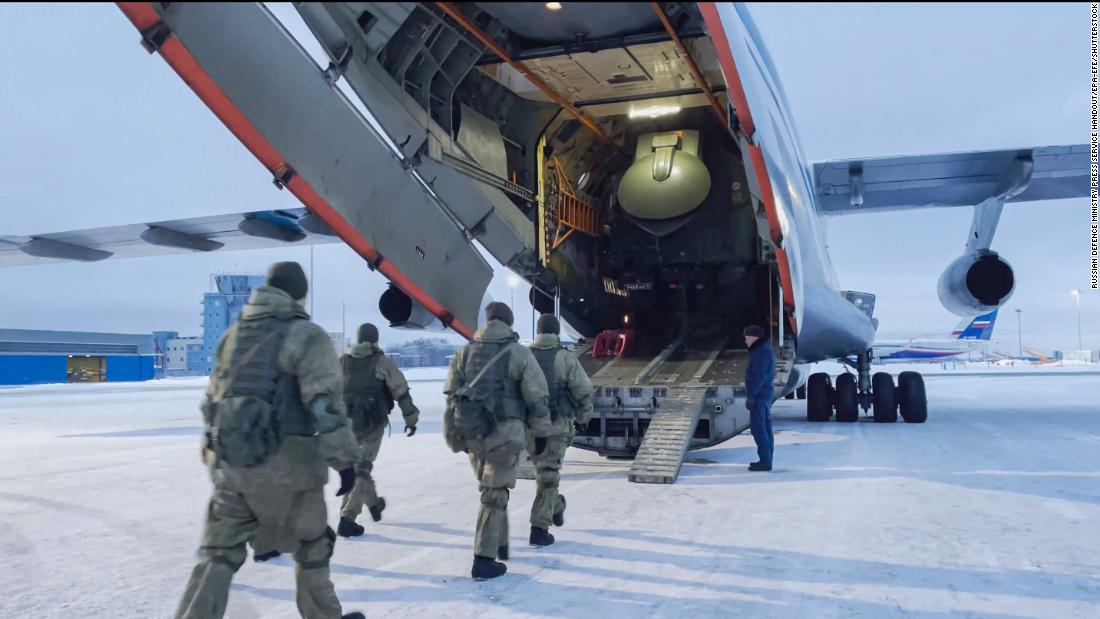 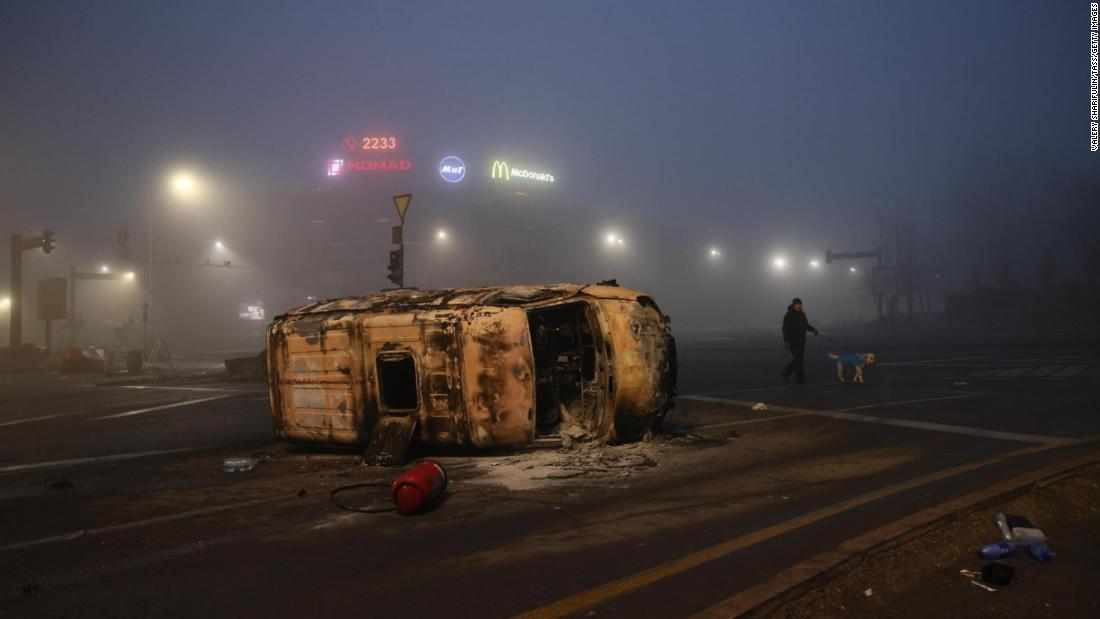 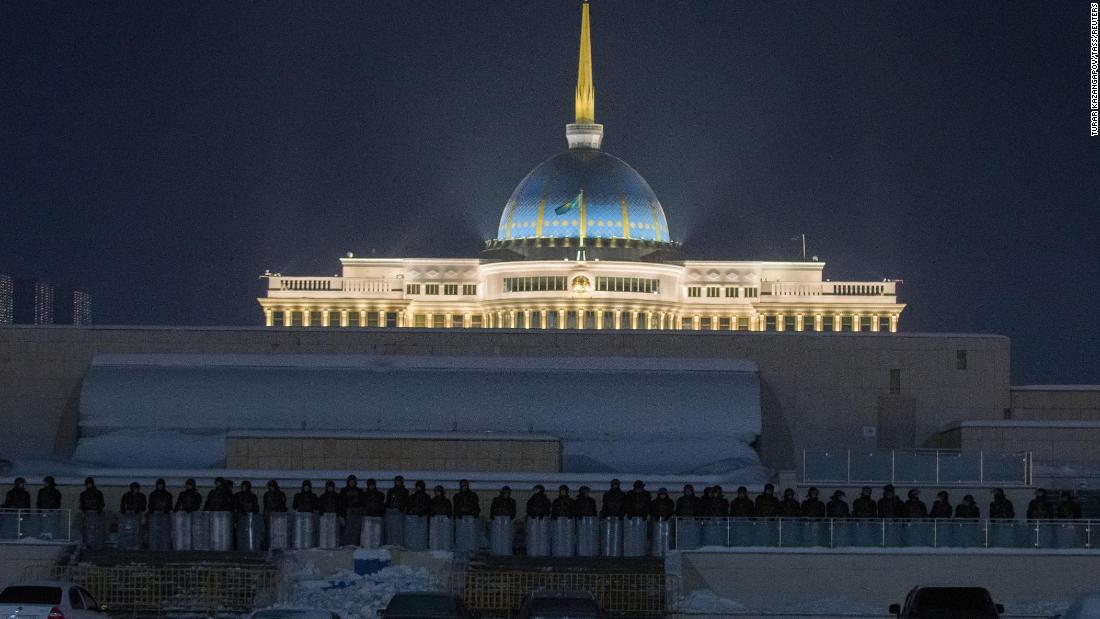 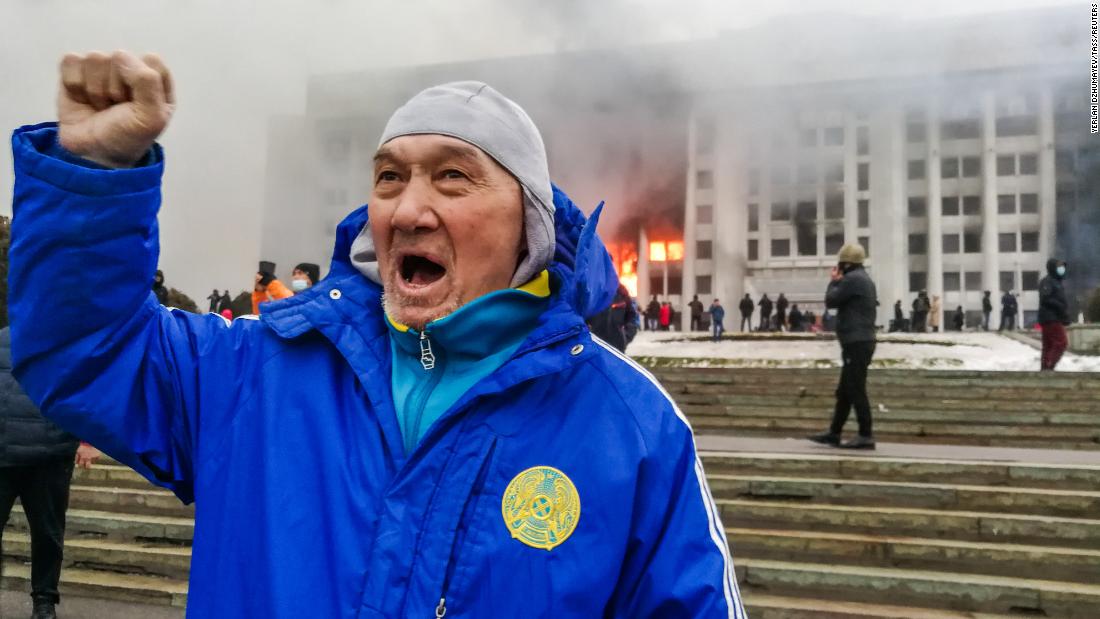 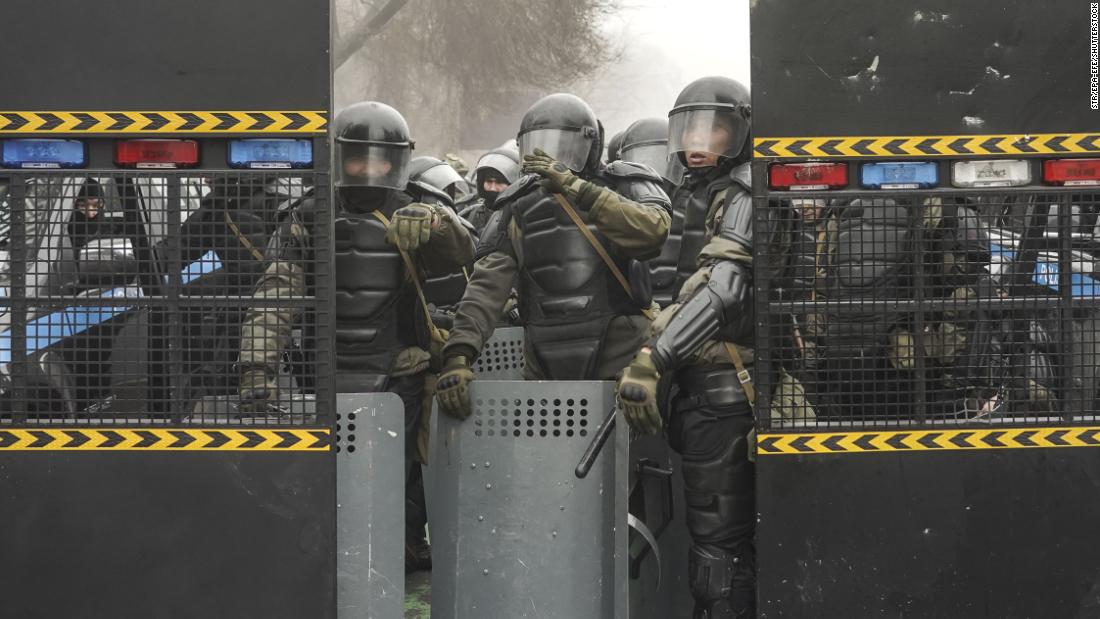 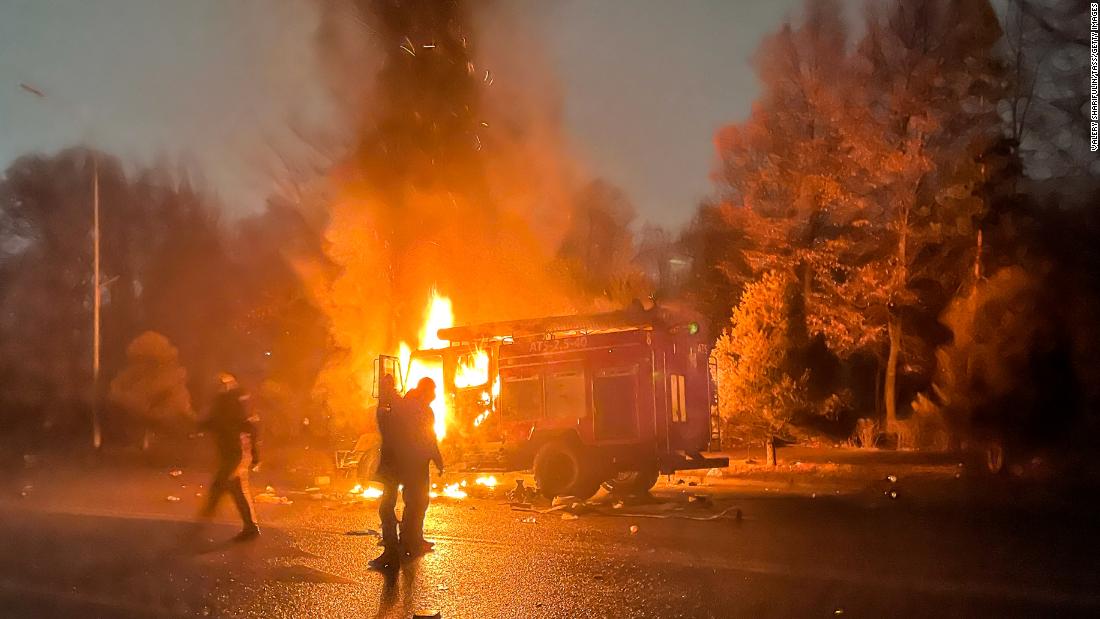 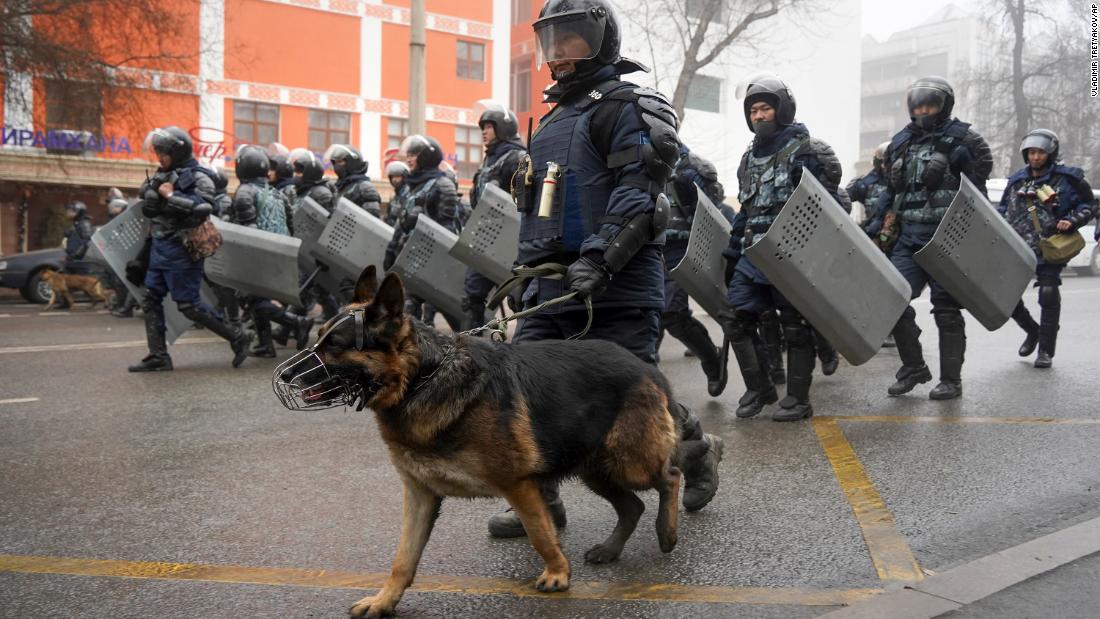 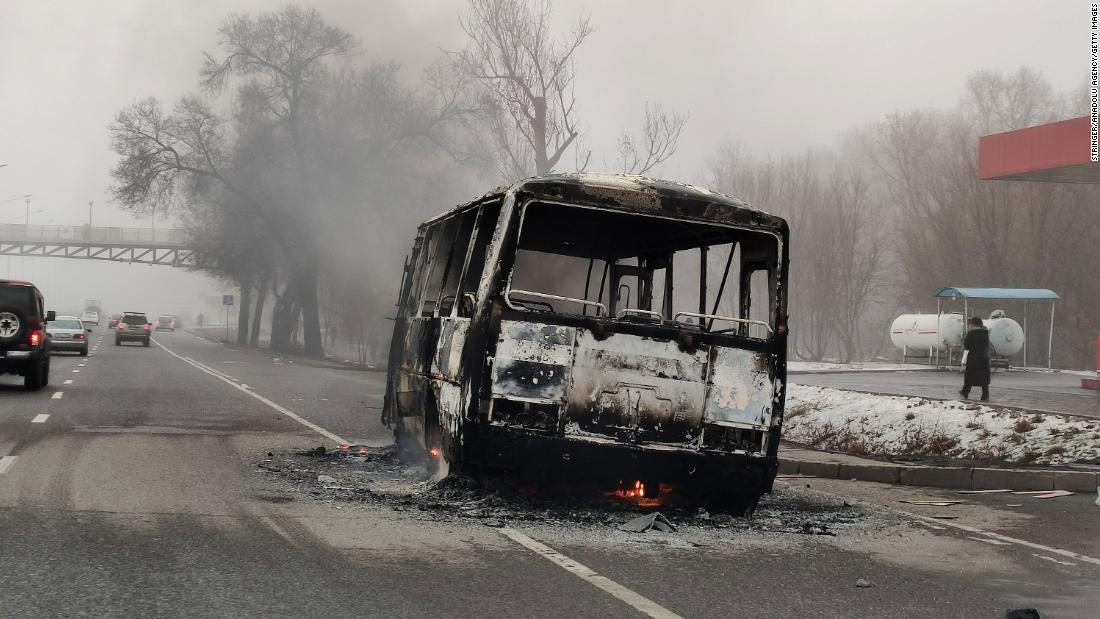 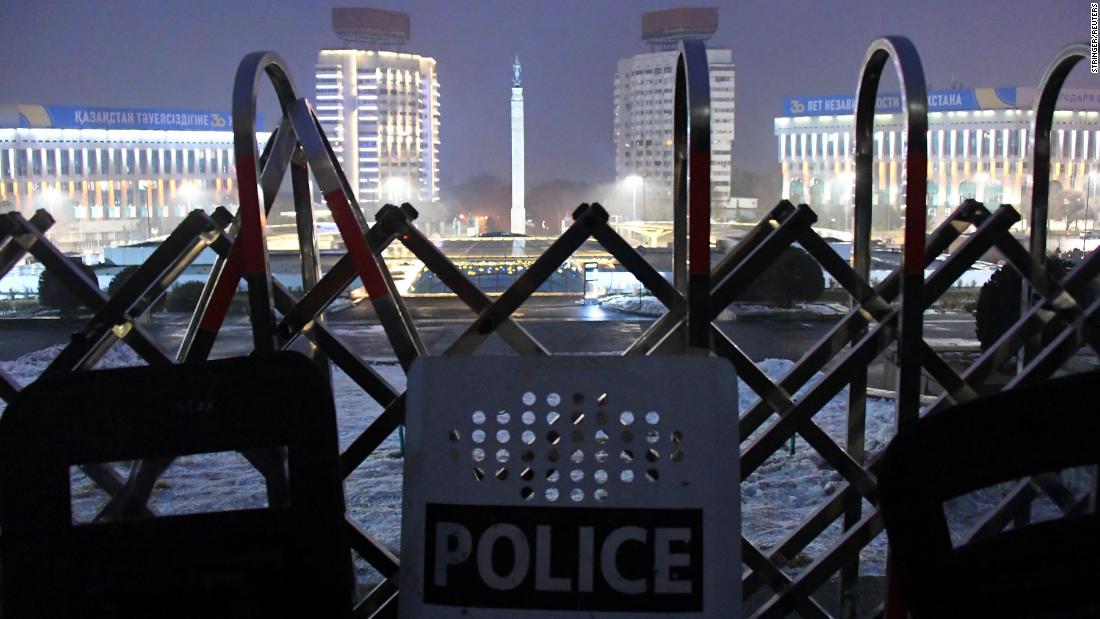 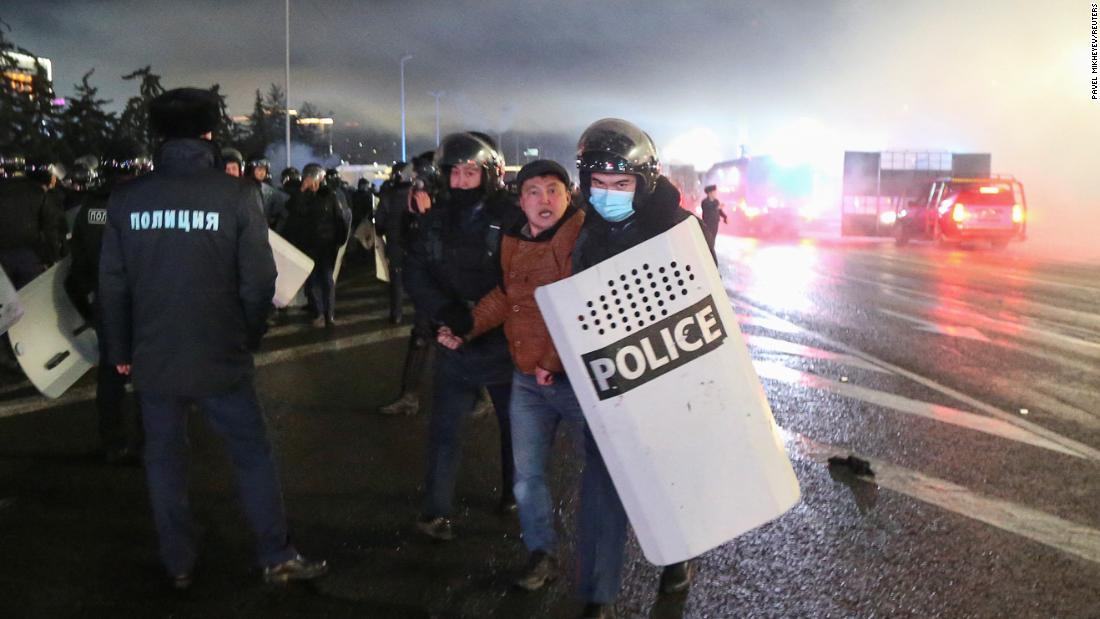 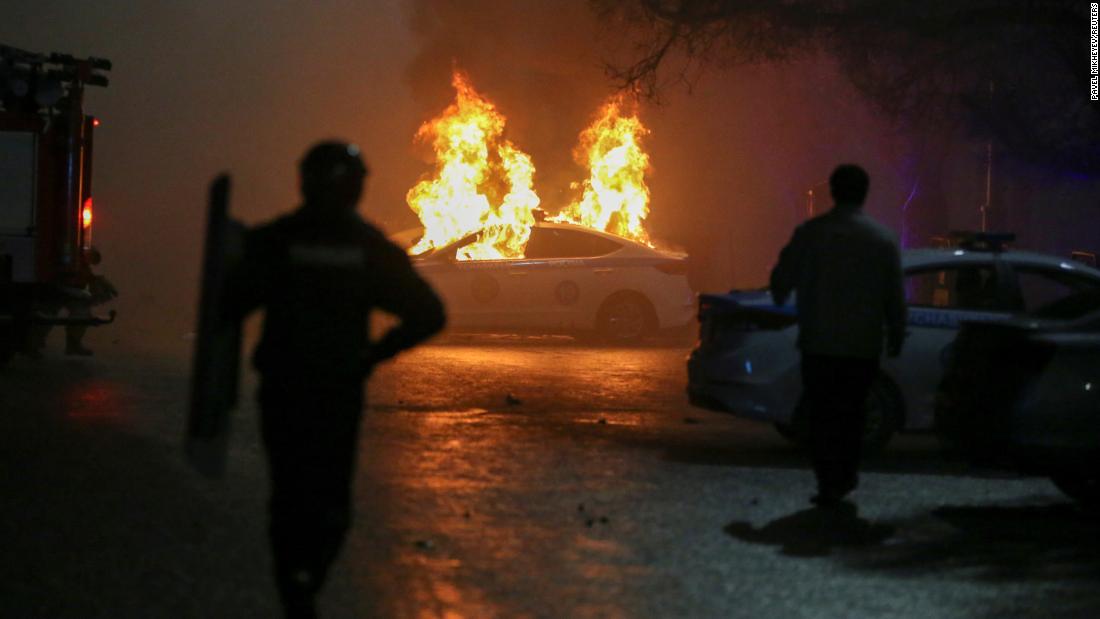 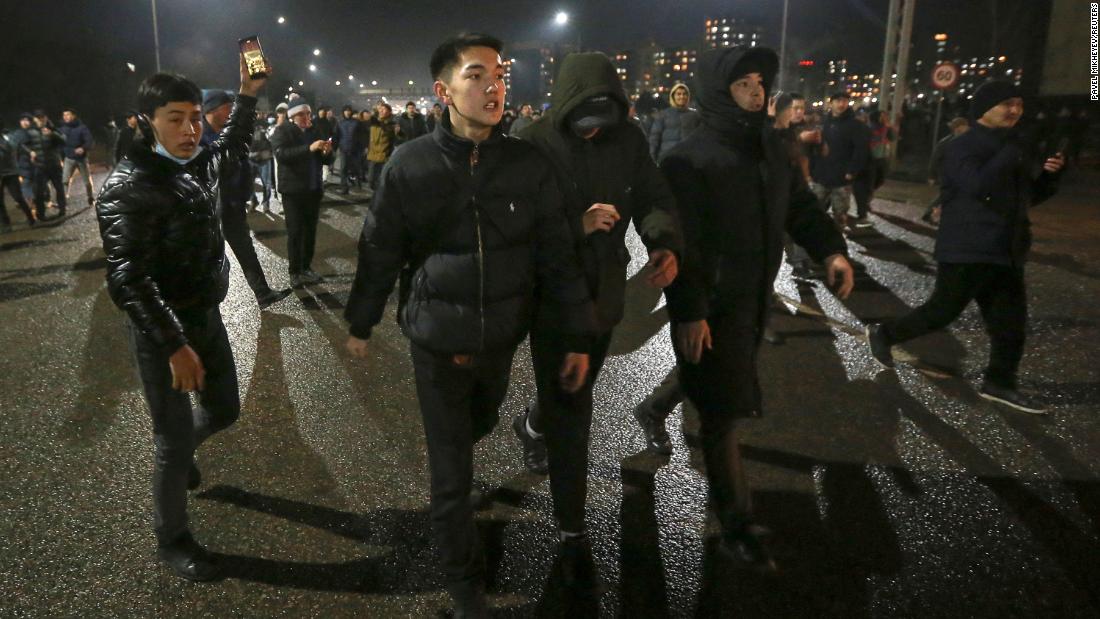 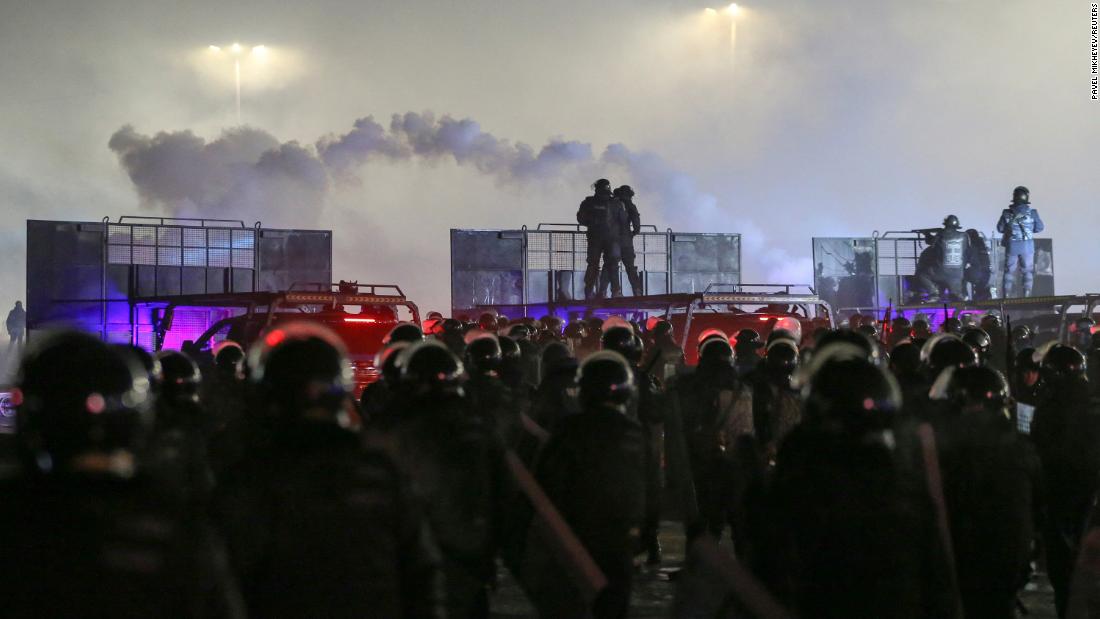 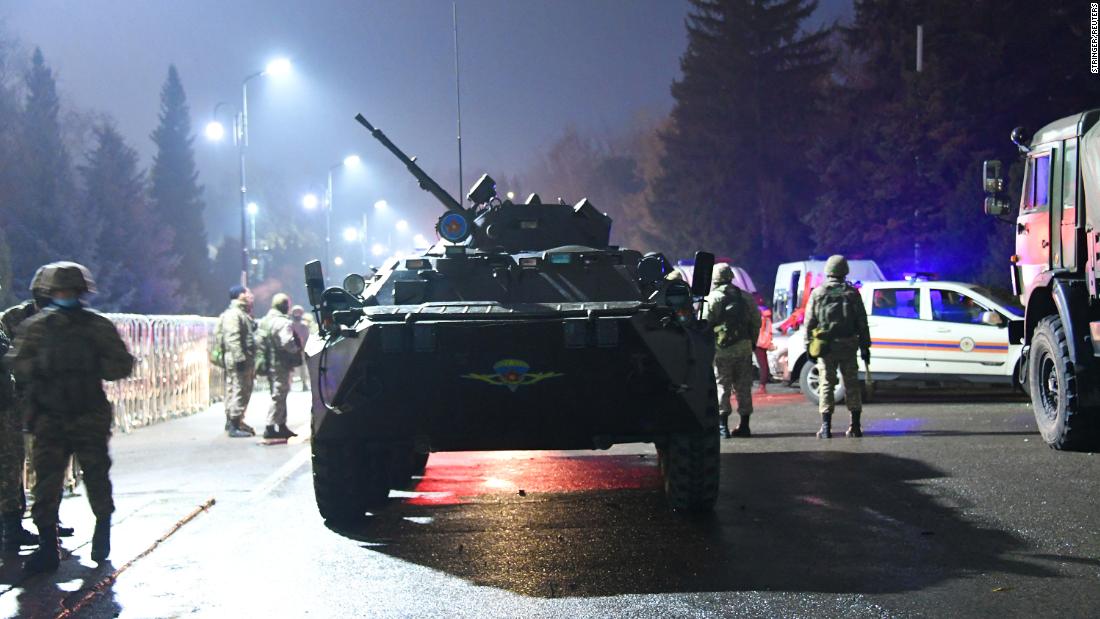 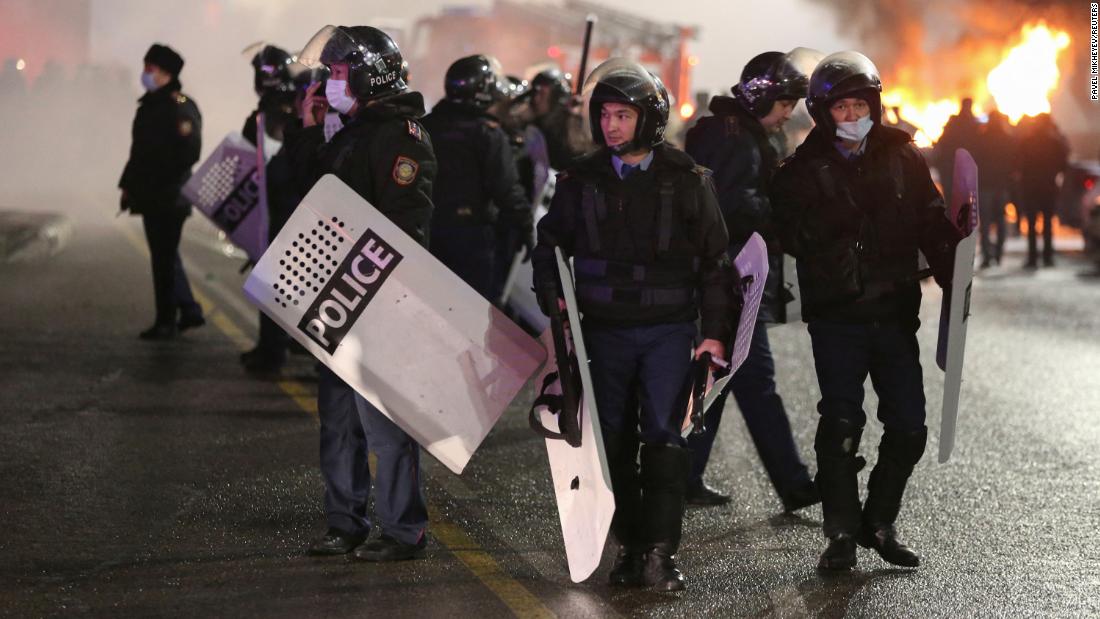 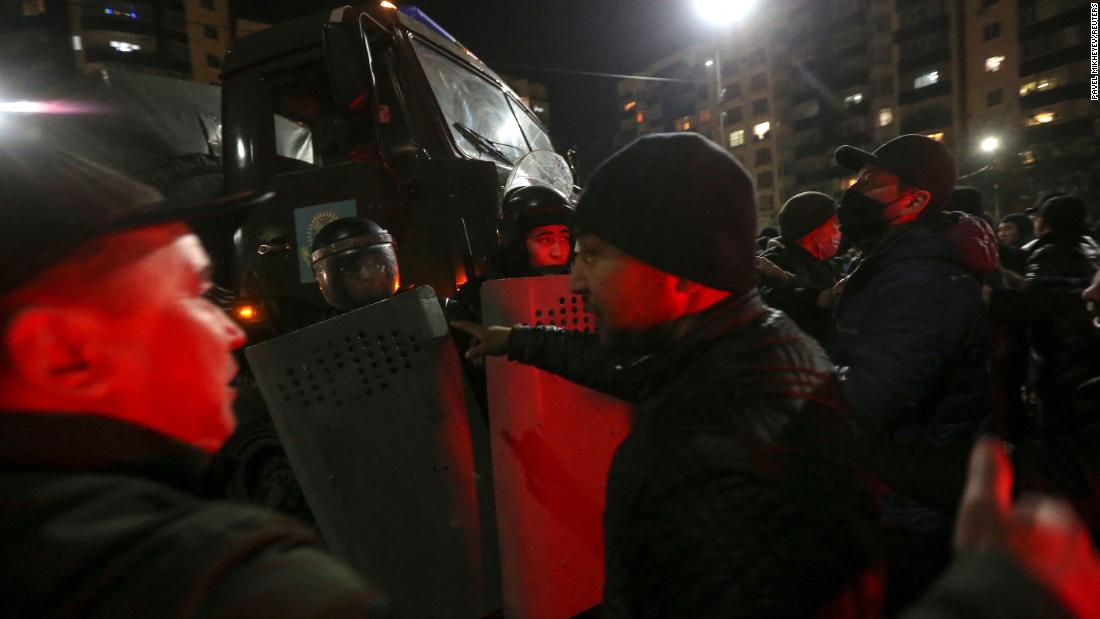 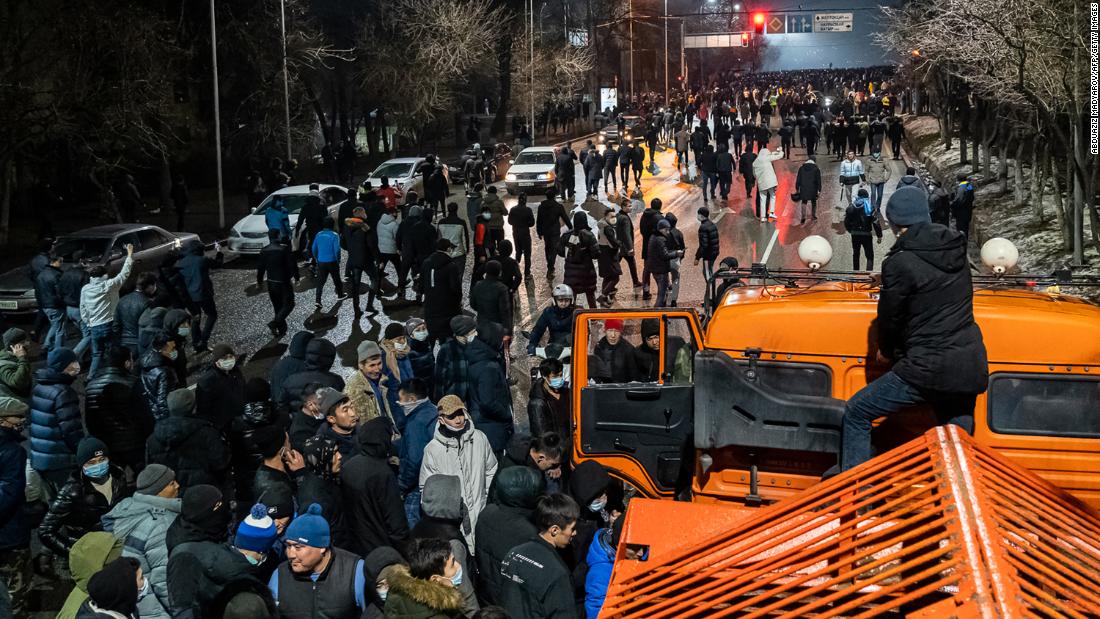 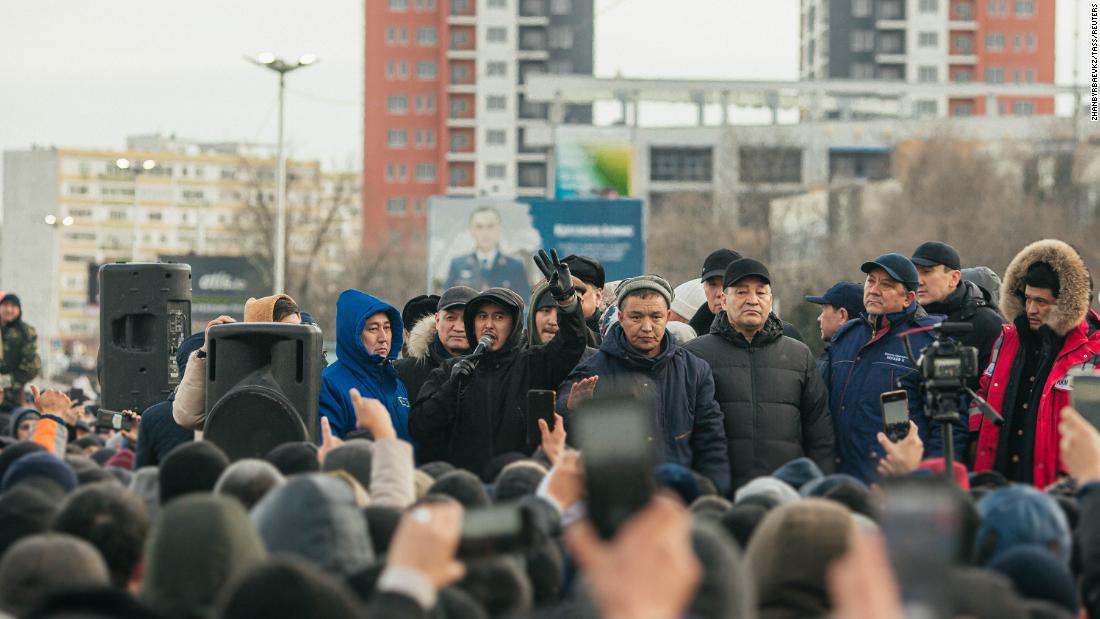 What led to the protests?

The demonstrations were ignited in the oil-rich western Mangystau region, when the government lifted price controls on liquefied petroleum gas (LPG) at the start of the year, Reuters reported. Many Kazakhs have converted their cars to run on the fuel because of its low cost.
Oil-producer Kazakhstan, the world’s ninth-largest nation by landmass, has attracted billions in foreign investment and maintained a strong economy since its independence 30 years ago.
But LPG subsidies had created a situation where Kazakhstan regularly faced oil shortages, Reuters reported. The lifting of the price caps was a means by the government to ease those deficits and ensure supplies went to the domestic market. However, the plan backfired and LPG prices more than doubled following the lifting of caps — protests then spread quickly around the country.

There are also longstanding issues driving the protests, including anger over endemic corruption in government, income inequality and economic hardship, which have all been exacerbated during the coronavirus pandemic, according to Human Rights Watch.
While the country’s natural resources have made a small elite vastly wealthy, many ordinary Kazakhs feel left behind.
Amnesty International said the protests are “a direct consequence of the authorities’ widespread repression of basic human rights.”
“For years, the government has relentlessly persecuted peaceful dissent, leaving the Kazakhstani people in a state of agitation and despair,” said Marie Struthers, Amnesty’s director for Eastern Europe and Central Asia in a statement.

What has been the government’s response?

Authorities declared a nationwide state of emergency with a curfew and movement restrictions until January 19, local media reported. Internet cuts have been reported nationwide and President Tokayev said military personnel had been deployed.
In an effort to curb the unrest, Tokayev ordered the government to reduce the price of LPG to 50 tenge ($0.11) per liter “to ensure stability in the country.”
He said a number of measures aimed “to stabilize the socio-economic situation” had also been put into place, including government regulation of fuel prices for a period of 180 days, a moratorium on increasing utility tariffs for the population for the same period, and the consideration of rent subsidies for “vulnerable segments of the population.” 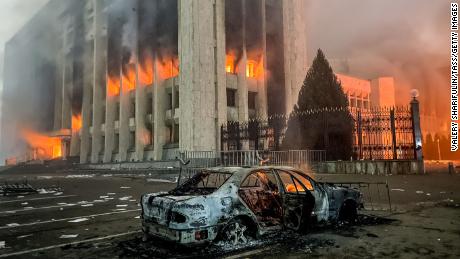 Prime Minister Askar Mamin and the Kazakh government resigned and Tokayev took control of the country’s Security Council, replacing former President Nursultan Nazarbayev.
Those concessions, however, failed to stop the protests.
Tokayev has vowed to act “as tough as possible” to stop the unrest. He called those who allegedly stormed the airport “terrorists” and accused protesters of undermining the “state system,” claiming “many of them have received military training abroad.”
A Russian-led military alliance of former Soviet states answered his appeal for help to put down the protests. The Collective Security Treaty Organization (CSTO) — which includes Russia, Belarus, Armenia, Kazakhstan, Kyrgyzstan, and Tajikistan — is sending “peacekeeping forces” to Kazakhstan “to stabilize and normalize the situation,” Armenian Prime Minister Nikol Pashinyan said.

Where is Kazakhstan and how is it governed?

Kazakhstan is the largest economy in Central Asia, with Russia bordering its north and China to its east. Its leadership, which has often boasted of its stability in a region that has seen its share of conflict, maintains close ties with Russia.
Kazakhstan is home to a significant ethnic Russian minority, which accounts for about 20% of the former Soviet republic’s 19 million population, according to the CIA World Factbook. Moscow also depends on the Baikonur Cosmodrome in southern Kazakhstan as the launch base for all Russian-manned space missions.
Much of the protesters’ anger has been directed toward Kazakhstan’s leadership, which tightly controls the country.
Even before independence in 1991, the country’s political scene has been dominated by one man — 81-year-old Nursultan Nazarbayev. The longtime president and former Communist Party official ruled for almost three decades before stepping down in 2019.
His autocratic method of governance sparked international concern and saw authorities harshly crack down on protests, jail critics and stifle press freedoms, according to global rights groups. Critics accused Nazarbayev of appointing family members and allies to key jobs in government and his family is believed to control much of the Kazakh economy, Reuters reported.

Nazarbayev was best known in the West for renouncing nuclear weaponry and his relocation of the capital to the futuristic city of Astana — which was later renamed Nur-Sultan, after himself.
The US State Department’s 2018 human rights report noted Kazakhstan’s 2015 presidential election, in which Nazarbayev received 98% of votes cast, “was marked by irregularities and lacked genuine political competition.” There have never been elections in Kazakhstan judged free and fair by international observers.

When Nazarbayev stepped down, he transferred power to Tokayev but remained an influential but controversial figure behind the scenes. Until January 5, he remained the chairman of the country’s Security Council and retained the title of Elbasy (Leader of the Nation).
His removal from the council by Tokayev does not appear to have stopped the current unrest.
Source: Read Full Article