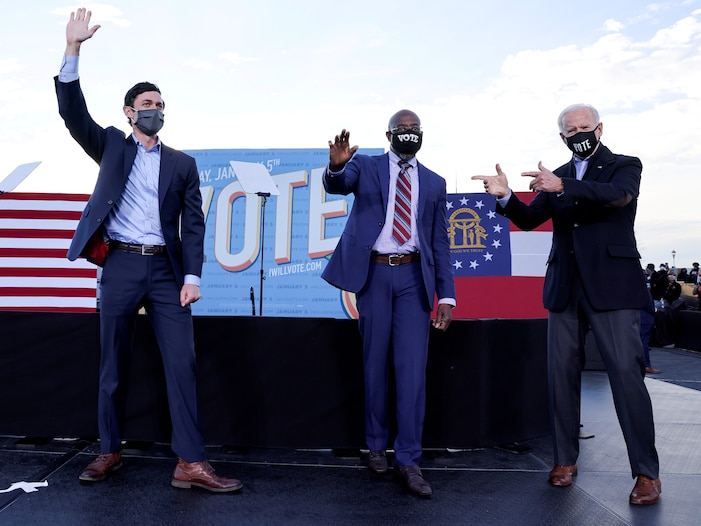 US stock futures fell along with the dollar on Wednesday after the Democrats wrested control of the Senate from the Republicans by narrowly winning two George runoff elections.

The 10-year US Treasury yield hit 1% for the first time since the start of the coronavirus pandemic as investors moved to price in more stimulus under a Democratic Senate and presidency.

Democrat Raphael Warnock beat incumbent Republican Kelly Loeffler in one Georgia race, while fellow Democrat Jon Ossof was projected to see off Republican David Perdue in the other.

It means the Senate is evenly split, handing Democrat Vice President-elect Kamala Harris the deciding vote. The Georgia results give Democrats control of the Senate, House, and the White House.

US stock futures fell as investors mulled the Georgia results, with S&P 500 futures down 0.51%.

Futures for tech-heavy Nasdaq tumbled 1.85%, reflecting worries that Democrats would raise taxes and crack down on the big US tech companies’ market dominance.

The victories give President-elect Joe Biden the chance to carry out his wide-ranging agenda, Danske Bank senior analyst Mikael Olai Milhoj said in a note.

“It becomes easier for the Democratic Party to make bigger changes to economic policy” such as “tax hikes and more investments in green energy,” he said.

The dollar fell 0.12% against a basket of other currencies, as traders priced in more fiscal stimulus as the final Georgia runoff election votes were counted.

Analysts said Democratic control of the Senate would likely lead to bigger stimulus checks worth $2,000 for each household, instead of the initially agreed $600.

The prospect of stronger stimulus also pushed bond yields higher. Yields on the benchmark 10-year Treasury rose to 1% as prices fell, before slipping back to 0.945%.

Meanwhile, gold rose on the back of dollar and Treasury softness. It was up 0.3 per cent at $1,956 per ounce, trading around its highest since November 9.

Derek Halpenny, head of research at MUFG, said in a note: “While these probable victories raise the level of political uncertainty and certain sectors of the US equity market may under-perform … the macro implications of these election outcomes are clearly positive.”

However, analysts stressed that the market implications of the Georgia runoffs were far from certain.

“Keeping the Democrats 100% united in the Senate will be difficult and we should not assume Biden will have it all his own way on policy with compromises likely. That should diminish concerns over any extreme shift to the left in economic policy.”

In Europe, the continent-wide Stoxx 600 index rose 0.54% as investors weighed up the Georgia elections and a pledge by Saudi Arabia to cut oil output.

European oil firms climbed in early trading after the OPEC+ group of oil producers struck a production deal. Saudi Arabia will cut production in an effort to shore up the oil market during a winter of travel restrictions due to COVID-19.

Brent crude oil was up 0.9% to $54.1 per barrel. The US benchmark WTI crude futures contract was 0.32% higher at $50.1 a barrel. Both contracts rose as much as 5% the previous day after the Saudi decision.

“Saudi’s surprise cut should help cushion prices in the near term, but also points to a more pessimistic demand outlook from the key producer,” UBS analysts said in a note.