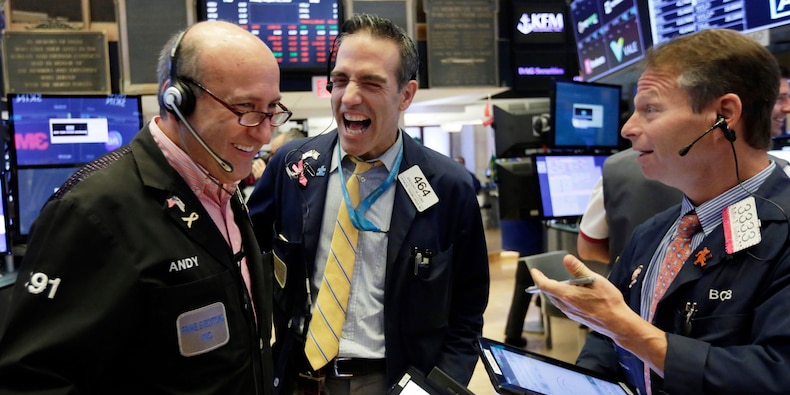 US and European stocks rose on Tuesday, led by investor optimism over stimulus measures from a bipartisan group of lawmakers and the growing chances of a Brexit trade deal.

Futures tied to the Dow Jones, S&P 500, and Nasdaq rose 0.5%, suggesting that major indices will open higher at the start of regular trading later.

US lawmakers unveiled two separate stimulus packages in Congress on Monday, amounting to $908 billion in economic relief. Both chambers of Congress have until midnight Friday to pass another funding agreement in order to keep the government open.

Equity markets were further buoyed by the first doses of Pfizer-BioNTech’s vaccine being administered to patients across the US after the FDA approved emergency use last Friday. The UK already began immunizations last week with the same vaccine. An FDA advisory committee will review competitor Moderna’s vaccine later this week.

Positive news on both stimulus and the vaccine front helped offset worries about harsher COVID-19 restrictions over the holidays, including in the UK, the Netherlands, and Germany.

Read More: From Wall Street heavyweights to boutique investment firms, we break down what 7 fund managers and market strategists think about Brexit as the ‘midnight hour’ approaches.

Effective COVID-19 vaccines are expected to be widely available to the general population in the second quarter next year, supporting a return to more normal levels of economic and social activity, said Mark Haefele, chief investment officer at UBS Global Wealth Management.

“So even with the 14% rally in global equities since the start of November, we think that there is further upside, and that the rotation trade over the last month into the market’s pandemic laggards has more room to run,” he said.

Much of Britain will be subject to tougher rules on movement on Wednesday after a new strain of COVID-19 was linked to a faster spread of cases. Close to 20,250 cases and 232 deaths were recorded in the UK on Monday, according to government data. The UK has one of the worst death rates in the world, with nearly 65,000 fatalities so far.

The UK and the European Union have restarted talks to secure a trade agreement as time runs out before the Brexit transition period ends in two weeks.

It ultimately remains to be seen whether both sides are able to reach an agreement, said Rabobank analysts. “Our base scenario of a ‘skinny deal’ still stands, but, oh boy, only 1 January 2021 really seems to mark the last page of this book,” they said.

Read More: Shark Tank investor Kevin O’Leary told us 2 concrete strategies for building wealth over time – and shared how a rude awakening during the pandemic led him to build a new investing app

In the US, Federal Reserve officials meet on Tuesday and Wednesday and could offer new insight on the outlook for monetary policy.  There are unlikely to be any major surprises, but the central bank will probably stress the importance of further fiscal measures to mitigate the threat of a double-dip recession, according to Milan Cutkovic, a market analyst at Axi.

The International Energy Agency trimmed its forecast for global oil demand in 2021 on Tuesday to 5.7 million barrels per day next year. That is  170,000 barrels per day below its forecast last month. Oil prices were little changed after the announcement as Brent crude futures rose 0.2%, to $50.41, and West Texas Intermediate rose 0.3%, to $47.13.