Footfall at British retailers is down 85% over the past two months, according to location data gathered by Google, with some areas effectively coming to a complete halt as the government’s lockdown hits.

Visits to retail and recreation establishments in Rutland, Britain’s smallest county, were down 100% compared with the pre-February baseline, while four other areas – Bath and North East Somerset, Midlothian, Nottinghamshire and York – all recorded drops of 90% or more.

However, the data suggests the sight of bare shelves could be coming to an end: at grocery and pharmaceutical shops there was a large increase in footfall at the beginning of last month, peaking at almost 30% by mid-March, but in the last two weeks the trend sharply reversed, with the retailers seeing huge drops in traffic – 46% nationwide – despite being exempt from the lockdown.

UK lockdown: what are the coronavirus restrictions?

People in the UK will only be allowed to leave their home for the following purposes:

Police will have the powers to enforce the rules, including through fines and dispersing gatherings. To ensure compliance with the instruction to stay at home, the government will:

Parks will remain open for exercise, but gatherings will be dispersed.

That pattern, of a spike followed by a slump, is common across almost the whole nation. But some areas bucked the trend: in Dundee, for instance, there was almost no increase in foot traffic to grocers, suggesting the panic buying that swept the nation bypassed the Scottish city. Conversely, Thurrock in Essex had one of the largest spikes, topping out at 40% higher than normal, and one of the steepest falls with traffic now down 53%. 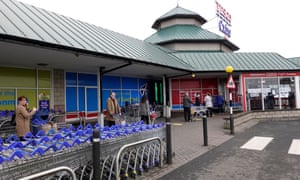 Google’s data also enables international comparisons: the US, for instance, is far behind the UK in encouraging widespread physical distancing. Retail and recreation is down just 47% there, while grocery and pharmacy visits have fallen 22%. But the car-centric nation has recorded a proportionally steeper decline in public transport use, down 51%, suggesting more Americans were able to cut back on that than on shopping.

The data comes from the vast corpus of information Google collects on all its users in order to offer services such as Google Maps, as well as targeted advertising. “Insights in these reports are created with aggregated, anonymised sets of data from users who have turned on the location history setting, which is off by default,” the company said. “No personally identifiable information, like an individual’s location, contacts or movement, is made available at any point.”

The company said the reports, which cover almost the whole world – with China a notable exception – “will be available for a limited time, so long as public health officials find them useful in their work to stop the spread of Covid-19”.

The release demonstrates the sort of information that governments have been requesting from technology and communications firms since the crisis hit. In the UK, for instance, the government has received aggregated location data from mobile carriers, allowing it to track the success of its physical distancing guidelines. In the US, some Facebook data, filtered through the company’s disease mapping project, has served a similar purpose, although the Centres for Disease Control and Prevention (CDC) has also received location data from mobile advertising companies.