New York (CNN Business)Coca-Cola is turning another one of its drinks into an alcoholic alternative. It’s the company’s third boozy beverage as it taps into the growing canned cocktail craze.

In a partnership between Molson Coors (TAP) and Coke, the companies are launching Simply Spiked Lemonade, an alcoholic drink inspired by the Simply brand’s fruit juice. Flavors include strawberry lemonade, watermelon lemonade, blueberry lemonade and regular lemonade. The alcohol will be derived from fermented sugar cane.
Molson’s Chief Marketing Officer Michelle St. Jacques said there was a “big opportunity” for Simply because it’s a “powerful and beloved” product. “Simply is known for its bold flavor and real fruit juice and there’s a great opportunity to create a new brand (in the alcohol aisle),” she told CNN Business in an exclusive interview. 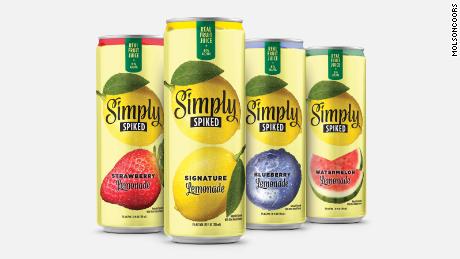 Simply Spiked Lemonade will be sold in a variety of 12-pack of slim cans, which has 5% alcohol-by-volume, and 24-ounce standalone cans. Prices weren’t yet released, but it will go on sale this summer.

Despite consumers shifting away from sugary drinks and juices, Molson is optimistic about the new product’s success because consumers are looking for bold flavors in the alcohol category.

Simply is Coke’s second-biggest brand in the US, generating $1 billion in revenue, St. Jacques said. Coke credited the “solid performance” of Simply in its annual report, despite its juice, dairy and plant-based beverages unit declining 9% last year. Slowing juice sales prompted Pepsi to offload its Tropicana brand to a private equity firm in a multibillion dollar deal last year.
Simply Spiked Lemonade joins Coke’s growing roster of alcoholic drinks leveraging its popular brands and looking for areas of growth. It recently revealed Fresca Mixed, a spirit-based cocktail, that will be released this summer in conjunction with Corona-maker Constellation (STZB). In 2020, Molson and Coke started selling Topo Chico hard seltzer and added a new tequila-based flavor, called Ranch Water, this year.
Ready-to-drink cocktail sales have exploded as drinkers look for convenience and new flavors beyond wine and beer. The beverage category grew 53% last year and is projected to grow another 29% over the next three years, according to data from IWSR Drinks Analysis.

The craze is overshadowing spiked seltzers. Following strong sales over the past few years, the low-calorie drinks have faded in popularity — and sales — as customers get bored with them. For Molson, sales of its hard seltzer brands have been performing well, but the company quietly discontinued Coors Seltzer last year to focus on its Topo Chico and Vizzy brands.
Coke rival PepsiCo (PEP) announced its entry into the alcohol market last year with “HARD MTN DEW,” a sugar-free canned beverage with 5% alcohol by volume that is being created with the Boston Beer Company (SAM).
Source: Read Full Article