Every morning in mid-March, Joey Evans woke up in his North Hollywood, California, home and flicked on the television to catch the live proceedings in the murder trial of Derek Chauvin, a former Minneapolis cop accused of killing George Floyd by pinning a knee to Floyd’s neck for 9½ minutes.

When he drove three hours to visit his dad in Fresno, Evans took the trial with him, listening to a livestream on his phone. This week, when the trial begins, he’ll be watching again.

“I do look forward to watching it,” said Evans, 36, who is unemployed and trying to build a small business. “I’m actually very intrigued by it because I just want to know where I stand in this society, being someone of color.”

The Chauvin trial is not only Minnesota’s highest-profile murder case, it’s the state’s first criminal case to be televised and and its first case in state court to be livestreamed, according legal experts. Opening arguments start Monday.

‘America is on trial’: Vigils, rallies held in George Floyd’s honor ahead of Derek Chauvin trial

Local activists believe such broad access should be the norm because cameras provide a sense of accountability and let the public see how a criminal trial works. Many of those most impacted by police violence are low-income and people of color. Fewer Black and Hispanic people have jobs that allow them to work from home, where it’s easy to keep a TV on in the background.

“We can’t trust this system; they need to be watched,” said Leslie E. Redmond, former president of the Minneapolis NAACP. 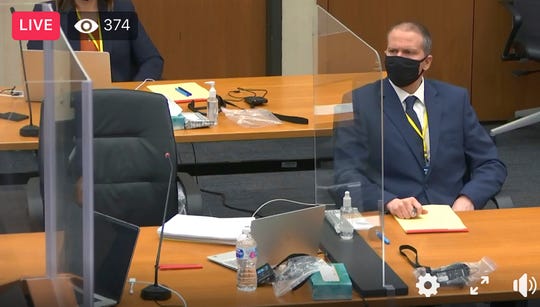 In this image from video, former Minneapolis police officer Derek Chauvin, right, listens as Hennepin County Judge Peter Cahill presides over a hearing before jury selection, Monday, March 8, 2021, in Chauvin's trial at the Hennepin County Courthouse in Minneapolis, Minnesota. Chauvin is accused in the May 2020 death of George Floyd. (Photo: Court TV/Pool via AP)

Minnesota is one of the more restrictive states in the U.S. when it comes to televising courtroom proceedings, but the judge overseeing this case made an exception because of the public interest and because the coronavirus pandemic has limited how many people can be in the courtroom.

Redmond likened livestreaming to body cameras: “Yes, we know the injustice is still going to happen whether we’re watching or not, but we need to be able to comment and to be able to show just how unjust the system is,” she said. “If George Floyd wasn’t murdered on camera, this would be a very different situation.”

Floyd’s death under Chauvin’s knee was captured on video and seen by millions. It sparked nationwide protests against racial injustice and police brutality, and it spurred debate about racial privilege and systemic inequity.

“We oftentimes just see the trial and we don’t have any video of the killing,” said Rashad Robinson, president of Color of Change, the country’s largest online racial justice organization. This time, “we saw the crime, and now we’re seeing the trial.”

Still, the widespread availability of trial video, particularly clips of key moments, could make it hard to avoid for people who feel overwhelmed by the coverage and the intertwining issues of race and police violence. For jurors, livestreaming makes it that much harder to keep clear of the news and remain impartial.

The Black community has long been skeptical of the justice system. Samantha Pree-Stinson, a community organizer in Minneapolis, recalled watching the O.J. Simpson trial as a kid. She said Black communities celebrated the fact that a Black man could “buck the system.”

In a world of misinformation and media bubbles, “seeing with our own eyes and hearing with our own ears exactly what is being said and how people are being spoken to” is crucial, Pree-Stinson said.

She has used jury selection to educate her 15-year-old and 10-year-old sons, who have asked how court works and have expressed disgust about the case, she said.

The core issue of the trial is expected to be whether Floyd died because of the pressure of Chauvin’s knee on his neck or, as the defense is expected to argue, because of drugs in Floyd’s system and his health issues. 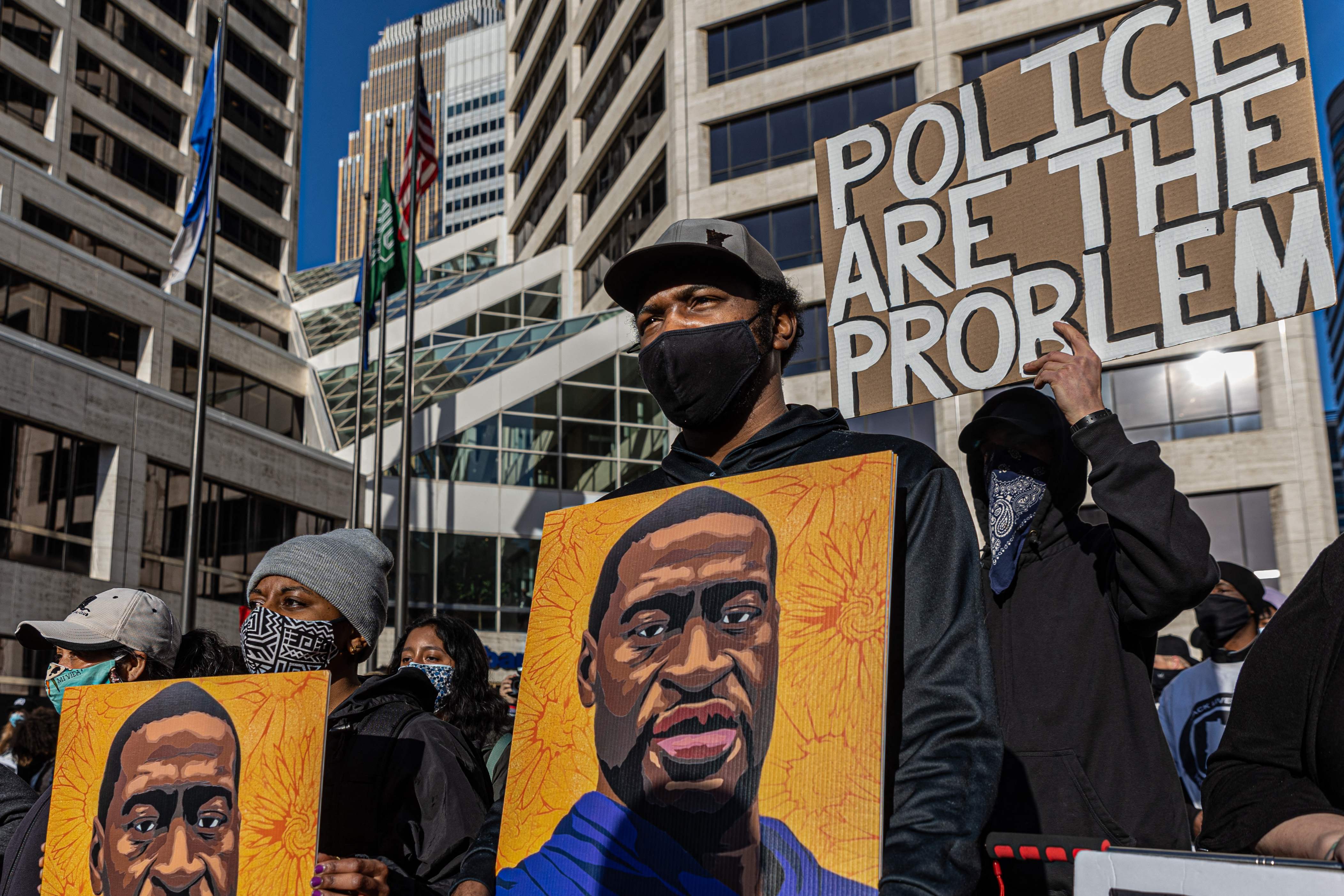 It’s important for the public to see arguments “being made on behalf of police officers,” Robinson said. “We are working to deal with a set of laws that incentivize police to kill us without accountability. … So I think it’s good the public sees how these laws operate and have to ask themselves, do they want these laws on the books in their names?”

Redmond said watching jury selection has demonstrated the bias in the legal system, including a prospective juror who was dismissed because English isn’t her first language and others who were cut because they had negative experiences with police and saw racial discrimination in policing.

Generally speaking, people with moderate feelings toward the police and the criminal justice system were not cut from the jury.

With cameras, ‘it’s easy to grandstand’

Court TV was just eight months old in 1992 when it broadcast the trial of the four Los Angeles police officers who beat Rodney King. Their acquittal led to five days of deadly riots. 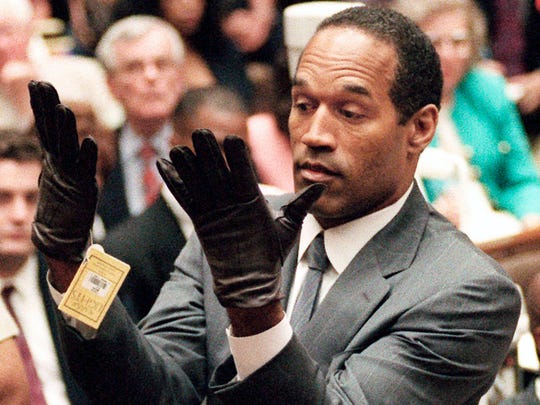 O.J. Simpson holds up his hands before the jury on June 21, 1995, after putting on a new pair of gloves similar to the infamous bloody glove during his double-murder trial in Los Angeles. (Photo: Vince Bucci, AP)

The decision to air the trial on “live television was good for everybody; it was good for democracy and (let everyone) see how the system functions,” said John Burris, a civil rights attorney who represented King. But it also “turned everyday witnesses into celebrities” when they never wanted to be.

Broadcasting a trial can turn it into a circus, Burris said.

“You need a strong-willed judge who keeps a lid on the lawyers,” he said. “It’s easy to grandstand if you have cameras on you like that every day.”

Video is abundant, but context isn’t

But the use of any technology brings opportunities for abuse. An image from testimony or a telltale expression on the defendant’s or a witness’ face can be paired with a false or misleading quote to push someone’s agenda. Even a real clip can be misleading without context.

“The lens is no longer a reporter’s interpretation of what happened in a courtroom; now it’s a slice of what happened for 14 seconds,” said William Raftery, a senior analyst with the National Center for State Courts, a nonprofit organization based in Williamsburg, Virginia.

“No person is gonna sit and watch eight hours of the trial. … What they're going to watch is 80 to 90 seconds.”

“There’s a little bit less of a filter,” he said. “But it’s also an inundation of data. No person is gonna sit and watch eight hours of the trial. … What they’re going to watch is 80 to 90 seconds.”

Safety and anonymity can be a concern for any witness in a high-profile case, but it’s greater when anyone in the world can watch, said Alicia Bannon, managing director of the New York-based Brennan Center’s democracy program. Personal and sensitive information that should be under seal could end up online and follow someone forever.

One prospective juror provided a former home address while being questioned about serving for Chauvin’s trial. He was cut off by the defense attorney, and broadcast media made efforts to bleep out the address.

“There are huge advantages to that ability to hold people accountable,” Bannon said. She noted the U.S. Supreme Court has said having people watch a trial helps keep everyone involved focused on their duties. But “there are tradeoffs.” 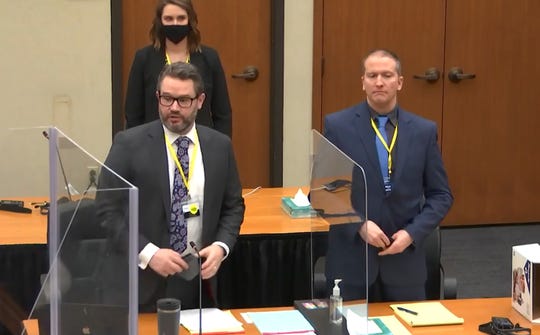 In this image taken from video, defense attorney Eric Nelson, left, and defendant former Minneapolis police officer Derek Chauvin, right, and Nelson's assistant Amy Voss, back, introduce themselves to potential jurors as Hennepin County Judge PeterÂ Cahill presides, prior to continuing jury selection, Monday, March 15, 2021, in the trial of Chauvin, at the Hennepin County Courthouse in Minneapolis, Minn. Chauvin is charged in the May 25, 2020, death of George Floyd. (Photo: AP)

High-profile cases have spurred changes in how trials are covered. In the 1800s, some newspapers ran transcripts of notorious cases, coining the phrase the “trial of the century,” Raftery said.

Media coverage of the O.J. Simpson trial turned the judiciary into a form of mass entertainment and reopened debate over cameras in the courtroom. The more than 1,000 members of the media at the Simpson trial produced more than 2,000 hours of coverage.

The pandemic has been a major time of innovation for public access to the judicial system. “We’ve had 10 years of innovation happen in the span of 10 days or 10 weeks last year,” Raftery said.

Court systems in Texas, Wisconsin, Florida and Minnesota have experimented with cameras and Zoom proceedings in the last year. But those changes may not be permanent.

“Judges and all the players in our justice system are kind of figuring out where those lines should be,” Bannon said.

In Minneapolis, Pree-Stinson spends hours each week outside the courthouse with activists and the Black community. During two weeks of jury selection, she saw people following along and posting updates on social media. For those who couldn’t do that, YouTube commentators and news outlets had livestreams that could be watched anytime.

“The posts around how people feel about what they heard and saw, those tend to come in the evening after people have had time to catch up and watch it,” Pree-Stinson said. 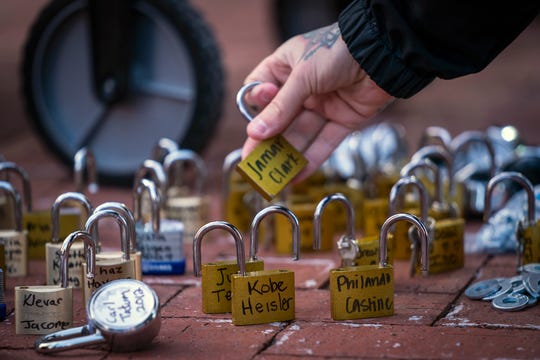 A lock is picked up as people place locks with the names of those killed by law enforcement in Minnesota on the fence outside the Hennepin County Government Center during the "Locks for Loved Ones Lost: Part II" event, Thursday, March 18, 2021, in Minneapolis. Attorneys at the trial of former Minneapolis Police Officer Derek Chauvin, who is charged in George Floyd’s death, have moved closer to seating a full jury. (Photo: Leila Navidi, Star Tribune via AP)

More than 1,900 miles away in California, Evans, who is half Black and half Native American, usually watches the trial live. Evans said it’s important to watch because it highlights society’s failures even as he hopes for change.