As a mob stormed the U.S. Capitol on Jan. 6, Washington, D.C.’s lead police psychologist briefly considered dashing to the scene. After all, it’s something Dr. Beverly Anderson has done countless times before.

Instead, she spent much of the afternoon at the bedsides of dozens of officers wounded in the melee, then drove around town with some of the police union guys, “just showing her face to remind everybody that she’s there and she’s an asset,” one D.C. officer recalled.

In the weeks that followed, Anderson spent almost every day leading “debriefings” with the nearly 1,000 D.C. police officers who responded. (Anderson has no role with the Capitol police, the agency that guards the U.S. Congress.) Over the hours—it was not unusual for a session to go until midnight—Anderson led officers through the difficult work of putting words to the memories.

Officers had been struck with pipes and fire extinguishers and flagpoles that once bore “thin blue line” flags meant to demonstrate support for the police. One officer was thrown to the ground, beaten and tased, while nearby insurrectionists screamed “Kill him with his own gun!” In some cases, those who stormed the Capitol were cops and veterans themselves. In the days afterward, Howard Liebengood, part of the Capitol police, and Jeffrey Smith, a D.C. officer, both died by suicide. Several officers reportedly turned in their weapons for fear of self-harm.

“You have to respect the enormity of what has happened to you,” Anderson explained in an interview. “They have to create a new normal.”

If Washington, D.C., was caught unaware by the siege at the Capitol, the Metropolitan Police Department itself has been uniquely well-equipped to handle the fallout. The department, working closely with Anderson, has taken the trauma that many officers endured that day very seriously.

Meanwhile, the work that Anderson has been doing for decades has attracted notice nationally, and experts say it offers a model for how police departments can work with independent, full-time police psychologists, who understand the challenges and unique culture of policing, to better safeguard the health and wellbeing of their officers. 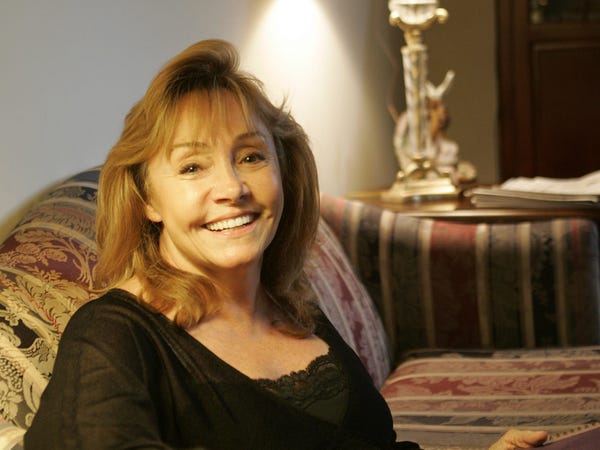 “NICEST LADY IN THE WORLD”

In the early 1980s, Anderson, who has a double PhD in clinical psychology and counseling psychology, was working full-time at a psychiatric hospital and speaking at public events about police mental health. Her husband worked in law enforcement, and she understood the stresses facing officers and the ways they often coped with that stress. Officers would approach her to ask if she could counsel them, and she often agreed—free of charge.

Soon, she approached the police union to ask about formalizing the arrangement. It turned out that in her informal role, she was meeting with more officers than all five of the department-funded psychologists combined, she said. Her program was born, and she became the clinical director of the Metropolitan Police Employee Assistance Program.

Anderson and her colleagues, Dr. Emily Green and Matt Frasca, begin connecting with officers from their first days of training at the Academy. “We pretty much have institutionalized the concept of: ‘This is a stressful profession. And this is a program for you to take care of yourself,'” she said.

The focus extends even beyond work-related incidents. Anderson and her colleagues provide couples therapy for officers and their partners, and, for a while, counseling to their children, although their work loads are too great to do that now.

“I don’t want to say little old lady, but that’s what she is” is how one officer described Anderson to Insider. It’s probably a description Anderson would despise. She’s petite and could be past retirement age, but she’s the opposite of frail. She works constantly, with the energy of an intern who really wants to land that paid gig.

And she’s tough. She likes to tell the story of the time someone tried to pick her pocket. “I chased the son of a b***h—and I got my money back,” she said. “I grew up hard,” she added.

That’s the extent she’s willing to talk about her personal background, though. Her accent still has traces of somewhere else—is it Boston?—but she doesn’t want to give details. “I’m from New England” is all she’ll say. But when it comes to supporting police officers, she can talk for hours.

“She’s just the nicest lady in the world, and you can go see her whenever you want,” said one officer, who wasn’t at the Capitol but saw her reaching out to other officers.

“She loves to respond to stuff in the middle of the night, that sort of thing. I think she’s definitely the biggest mental health resource we have right now.”

SEND YOUR EMOTIONS TO ACAPULCO

All across the country, a mental health crisis has hit police departments. In 2019, a record 228 officers died by suicide—a 33% increase from the year before. Nationally, departments have been bemoaning a slide in recruitment for years, with 86% of police chiefs saying they have a shortage of officers that has grown worse over the past five years.

While officers may experience as many as 900 traumatic events during their careers, the culture inside police precincts—which emphasizes helping others first and eschewing any sign of potential weakness—can lead to a reluctance to seek out mental health care. 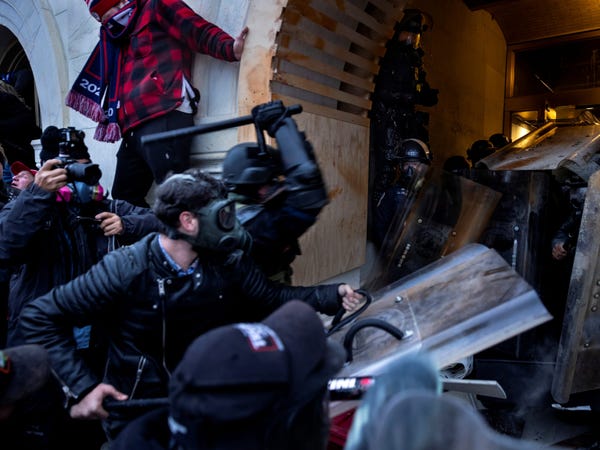 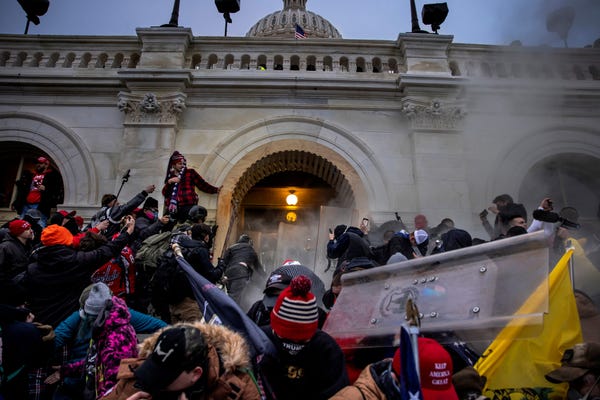 “You have to be able to compartmentalize for a little while, but it’s equally important to clean out the compartments later,” said Dr. Colby Mills, a police psychologist in nearby Fairfax County, Virginia. “Otherwise what you get is toxic materials spilling out of those boxes, and that causes all sorts of problems.”

More broadly, officers interviewed for this story spoke of the way the job can numb them. They have learned not to react visibly to the horrors they witness, the murders and accidents and violence, as well as the public scrutiny that comes with the work. It can be incredibly isolating and difficult to balance their lives at work and home.

As Anderson puts it, policing requires hypervigilance. After a traumatic event like the attack on the Capitol, for police to continue doing the job, “they have to send their emotions to Acapulco.”

“DOING WHAT I LOVE TO DO”

The past year, according to Violanti, “was probably one of the worst years that officers have had in a long time.”

It was the year of the COVID-19 pandemic and one of the most violent years in decades, with homicides and violent crimes spiking and the death toll from shootings rising higher than it’s been in 20 years.

The summer brought public demonstrations against police brutality and racist policing, adding to mounting stress. And then there were the baseless claims by Donald Trump that his defeat to President Joe Biden had been the consequence of fraud. Before the Jan. 6 insurrection, there were two increasingly violent rallies in Washington, D.C. led by Trump supporters, where at least four people were stabbed and the city was left on edge, wondering when violence would strike next. 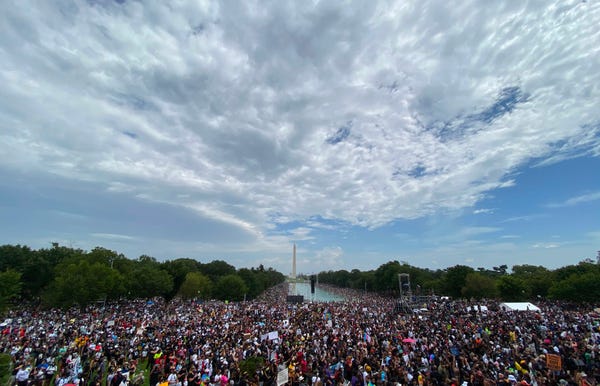 Amid all of this, experts say it’s necessary to double down on mental health care for police.

“This is really serious. We’ve got to do something. We’ve got to do better,” Kamena said. “We can’t expect these people to go out there and put their lives on the line, and when they get damaged, that we don’t take care of them—unconscionable.”

All of the experts who spoke to Insider recommended regular, perhaps yearly, mental health check-ups that are voluntary and confidential for the officers.

“It’s like going to the dentist or going to a doctor’s appointment every year,” Violanti said.

An officer who works near D.C., speaking on the condition of anonymity because he was not authorized to speak on the record, echoed that sentiment. “We go for physicals every year. We don’t go for psychologicals, or mental health checkups, ​on an annual basis,” he said. “But we should.”

Experts also highlighted the importance of peer support programs, where experienced officers help others navigate emotional landmines, and bringing officers’ partners into the counseling process can also help support them.

As the city and its officers prepare for more potential violence in the future, Anderson, who has been doing this work since 1982, shows no signs of slowing down.

It took two weeks for her to find a time to speak with Insider; she finally settled on a Saturday afternoon, between debriefings. One minute into the video call, her phone dinged, and she halted the interview to type out a response quickly.

But she never loses her buoyant energy. She says she is “living my perfect life, really, doing what I love to do.”