Pepsi is bringing back the soda for a limited-time run to celebrate its 30-year anniversary. However, Crystal Pepsi won’t be available to buy.
Instead, it’s part of a contest where fans can win the beverage by using the hashtag #ShowUsYour90s on Twitter. Pepsi wants consumers to post pictures of themselves in the ’90s, and the company will choose its favorite 300 photos. Those lucky 300 will receive six 20 ounce bottles of Crystal Pepsi — and be the first to get their hands on the drink in years. 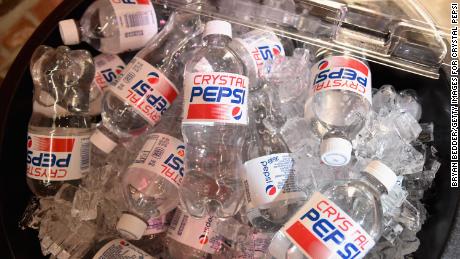 Crystal Pepsi debuted in 1992 but was pulled off the market in early 1994.

David Novak, the former CEO of Yum! Brands (YUM), is credited with dreaming up the idea when he was an executive at Pepsi. He told Fast Company in 2007 that it was the “best idea” he ever had, but it was also the “worst executed.”

“People were saying we should stop and address some issues along the way, and they were right,” Novak said. “It would have been nice if I’d made sure the product tasted good.”
Novak was wrong about another thing: “Once you have a great idea and you blow it,” he said in 2007, “you don’t get a chance to resurrect it.”
Despite Crystal Pepsi’s short shelf-life, the ’90s soda has maintained a loyal following. Fans campaigned for years to get Pepsi to bring it back. It was most recently revived for a limited-time run in 2016.
Pepsi pointed to the super-wide JNCO jeans, which are popular once again, and other trendy ’90s items, including Tamagotchies, scrunchies and bucket hats, as the reason it’s bringing back Crystal Pepsi.

Big brands have been tapping into nostalgia lately as a way to drum up attention and entice younger buyers. McDonald’s (MCD), Pizza Hut and Coca-Cola (KO) have all brought back old favorites to much excitement.
Of course, nostalgic items don’t always work out, especially in the crowded beverage space. Coca-Cola recently discontinued making and selling Tab, its first-ever diet soda that acquired a huge fan base in the 1970s and 1980s and maintained a small but devoted following through the years.
Source: Read Full Article