EXCLUSIVE: The Gotham Film and Media Institute and HBO Documentary Films have set the inaugural cohort and mentors for their Documentary Development Initiative, first announced in June. 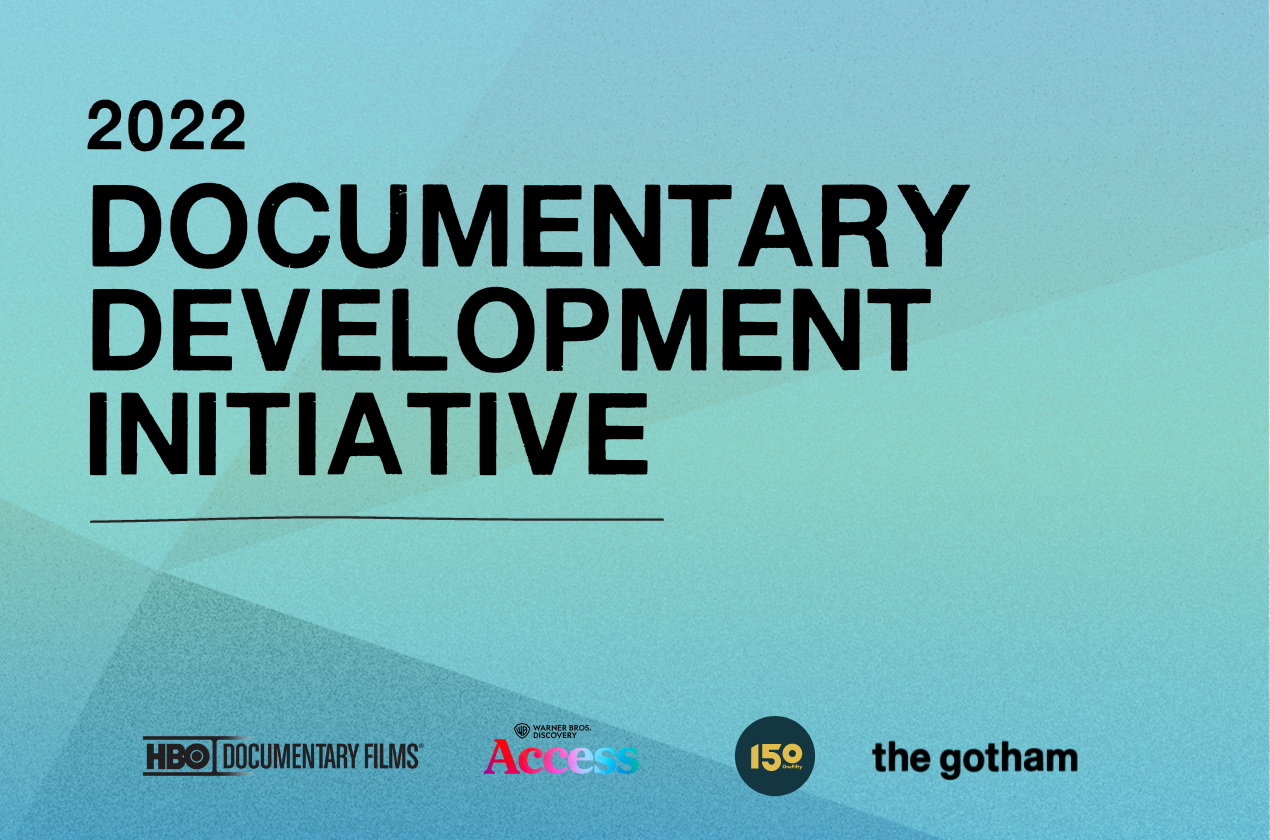 The Documentary Development Initiative was designed to bolster storytellers who identify as BIPOC, LGBTQ+ and/or storytellers with disabilities, by providing them with the resources necessary to develop thought-provoking, character-driven, contemporary ideas for documentary films and limited series.

In addition to one-on-one mentoring, each of the selected filmmakers will be given a $50,000 grant sponsored by HBO Documentary Films, OneFifty and WBD Access for research and creative development on new documentary projects, with select grantees to be presented with the opportunity to receive additional funding.

The program kicks off this month and will continue through fall 2023, with ideas generated through the initiative being offered to HBO on a first-look basis.

“We are thrilled to have the opportunity to collaborate with such a talented and unique group of fellows for our inaugural initiative. We can’t wait to see where their ideas take them,” said HBO Documentary Films’ Senior Vice President, Sara Rodriguez. “We are also grateful to our mentors whose experience and support will be transformational to the program.”

“The applications we received for the inaugural cohort for this initiative were filled with incredibly strong candidates from a variety of backgrounds with unique perspectives. This made it hard to select just 10 filmmakers,” shared The Gotham’s Deputy Director, Kia Brooks. “However, with the funding from HBO and the resources we at the Gotham will provide, we’ll be able to support a group of filmmakers with dynamic visual styles and a knack for telling powerful and boundary-breaking stories.”

More information on cohort participants and mentors selected for the inaugural Documentary Development Initiative can be found below.

Zeshawn Ali is a director, originally from the Midwest and currently based in New York. His feature film debut, Two Gods, was released in festivals and theaters across the US and aired on “Independent Lens” on PBS. It was named a Critic’s Pick by the New York Times and nominated for a Cinema Eye Spotlight Award.

Brit Freyer (he/him) is a Brooklyn-based queer and trans filmmaker from Chicago. His process-based nonfiction films, including The Script, Caro Comes Out, and Across, Beyond, and Over, use the act of creating to explore memory and imagine futures that aren’t here yet. Brit and his work have been supported by the Sundance Ignite Fellowship, Creative Culture, Chicken & Egg, and GLAAD’s Equity in Media and Entertainment Initiative.

Juan Pablo González is a filmmaker whose body of work includes The Solitude of Memory (IDFA 2014), Las Nubes (IFFR 2017), Caballerango (IDFA 2018), and Dos estaciones (Sundance 2022). His work has been supported by IMCINE, Venice Biennale, Sundance, Tribeca, FONCA, and the Vilcek Foundation.

Melanie is a Vietnamese American filmmaker and writer with roots in Florida and Mississippi. Her work focuses on trauma, familial relationships, gender, displacement, and intimacy.

Crystal Kayiza was raised in Oklahoma and is now a Brooklyn-based filmmaker. Named one of Filmmaker magazine’s “25 New Faces of Independent Film,” she is a recipient of the Creative Capital Award, Sundance Ignite Fellowship and Jacob Burns Film Center Woman Filmmaker Fellowship. Her work has screened at Sundance, Toronto International Film Festival, and the Museum of Modern Art and appeared on The New Yorker, Starz and PBS.

Jasmín Mara López is a Mexican-American filmmaker living between Los Angeles and New Orleans. Born in the U.S. with familial roots in México, her childhood was affected by issues experienced on both sides of the U.S.- México border. This instilled in her a strong passion for immigrant rights, youth empowerment, and social change.

Amber Love is a filmmaker and festival programmer based in Chicago, IL. Her work has explored Afrofuturism, alternative families, and Black heritage, and has been supported by IF/Then, Short of the Week, Next Doc, and the Sundance Art of Editing Fellowship. Her forthcoming short film Lifetimes, is funded by the Firelight Homegrown: Future Visions initiative, and her upcoming feature One Another was selected for the Kartemquin 2022 Diverse Voices in Docs program.

Khaula Malik is a Pakistani American filmmaker and artist whose work spans the documentary and fiction space and explores intersectional identity and concepts of home. Khaula is currently in post-production on her first feature doc, which has been supported by DOC NYC and the Catapult/True False Rough Cut Retreat. Recently, she co-produced Apple TV+’s Girls State and her work has been featured on PBS, the New York Times, and Sight & Sound.

Habiba Nosheen is a three-time Emmy award winning journalist and filmmaker. She is the creator and host of the investigative podcast, Conviction: The Disappearance of Nuseiba Hasan with Gimlet Media and Spotify. Her documentary films have been supported by ITVS, PBS FRONTLINE, JustFilms, Firelight Media, The Pulitzer Center, and The Center for Asian American Media among others.

Mobolaji completed his B.A. at UCLA and his MFA in directing at AFI. Mobolaji is the winner of the Tribeca Film Festival Audience Award for his feature documentary Ferguson Rises, which also qualified for the 2022 Academy Awards. Olambiwonnu’s goal is to use cinema as a tool to share diverse cultural and political experiences, critique the superficial conditions that divide us, and accentuate the merits of shedding our prejudices.

Cecilia Aldarondo is a director-producer from the Puerto Rican diaspora whose feature documentaries Memories of a Penitent Heart (2016) and Landfall (2020) premiered at the Tribeca Film Festival and were co-produced by the award-winning PBS series POV. Currently she is directing her third feature, a co-production with HBO. She teaches at Williams College.

Geeta Gandbhir is an award-winning director, producer, and editor with over 25 years of experience in the film industry. Her most recent film, After Selma: The Lowndes County Freedom Party, premiered at the 2022 Tribeca Film Festival and will air on Peacock. The winner of three News & Documentary Emmy Awards, Gandbhir’s directing credits include Black and Missing, Why We Hate, I Am Evidence, and A Journey of a Thousand Miles: Peacekeepers.

TJ Martin is an Academy Award- and Emmy Award-winning director and editor whose works include HBO’s Tina, LA92, Undefeated, and the Webby-nominated short My Favorite Picture of You. Martin became the first director of African-American descent to win an Oscar for a feature-length film in 2012 with his documentary Undefeated.

Smriti Mundhra is an Academy Award- and two-time Emmy-nominated director/producer and one of DOC NYC’s 40 Under 40 Filmmakers to Watch. Recently, she won a DGA Award for Outstanding Directorial Achievement in Children’s Programs for her work on Through Our Eyes with HBO Max and Sesame Workshop. She is also the creator and executive producer of the Primetime Emmy-nominated series Indian Matchmaking, an eight-part Netflix original documentary series.

Matt O’Neill is an Emmy Award-winning and Academy Award-nominated documentary filmmaker who has been working with Downtown Community Television Center (DCTV) for the last 20 years. He co-created the HBO docu-news series Axios with Perri Peltz and has directed films including HBO’s Baghdad ER, China’s Unnatural Disaster and Alternate Endings among others, focusing on subjects ranging from the U.S. criminal justice system to the Egyptian Revolution to the wars in Iraq and Afghanistan.

Sam Pollard is an accomplished feature film and television video editor and documentary producer/director. In 2020, he was one of the directors on the HBO series Atlanta’s Missing and Murdered: The Lost Children, and he completed MLK/FBI, which premiered at the Toronto International Film Festival and the New York Film Festival. Recently, he co-directed Lowndes County and The Road to Black Power with Geeta Gandbhir, which will premiere in 2023 on the Peacock Channel.

Alex Stapleton is an Emmy award-winning documentary filmmaker, television director, and founder of the production company House of NonFiction. Her credits include Pride (FX), Hello Privilege. It’s Me, Chelsea (Netflix), Shut Up & Dribble (Showtime), The Playbook (Netflix), and Corman’s World: Exploits of a Hollywood Rebel (A&E). Currently, she is directing two projects for HBO and a documentary feature on Reggie Jackson for Amazon, all of which will air in 2023.

Jennifer Tiexiera is an award winning documentary director, producer and editor and one of the co-founders of Lady & Bird, a female-run documentary production company focused on telling stories from underrepresented voices. Her work has been showcased at the Tribeca, Sundance, SXSW, and Toronto film festivals. Tiexiera is a member of Brown Girl Doc Mafia, Documentary Producers Alliance, IDA, LatinX Directors, Women in Film and Film Fatales, and just finished directing the 3-part series Unveiled: Surviving La Luz del Mundo for HBO.

Rudy Valdez is a two-time Emmy-winning filmmaker and a 2018 Critics Choice Documentary Awards Nominee for Best New Director. Rudy’s directorial debut, The Sentence, premiered at the 2018 Sundance Film Festival, won the US Documentary Audience Award, and was acquired by HBO.

Matt Wolf is a documentary filmmaker in New York. His features include Wild Combination, Teenage, Recorder, and most recently Spaceship Earth. Matt has made many short films, including Another Hayride and Bayard & Me.

Mel Gibson Won’t Be Testifying In Harvey Weinstein’s L.A. Rape Trial After All