New York (CNN Business)Cheese connoisseurs, it’s time to celebrate: Taco Bell is bringing back the Quesalupa after a five-year hiatus.

The Quesalupa quickly became a fan favorite when it debuted in 2016, combining the cheesy traits of a quesadilla with a crispy chalupa shell to create a double layer filled with seasoned beef, lettuce, cheddar cheese, diced tomatoes and a dollop of sour cream. Vegetarians can substitute the beef with black beans.
The $2.99 item will relaunch nationwide Thursday and will be available for a limited time. A combination meal, which includes a Quesalupa, two crunchy tacos and a large drink, costs $6.99. 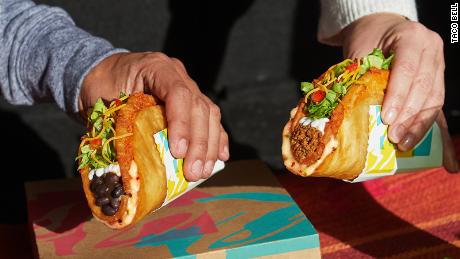 Taco Bell describes the new iteration as an “epicly cheesy experience,” with 50% more cheese — a mixture of melted pepper jack and mozzarella — compared to its predecessor. The restaurant chain began testing the new version in September at some locations in Knoxville, Tennessee.

Taco Bell’s parent company Yum Brands (YUM) has found itself playing catch up with digital orders and its rewards program because they account only for 12% of orders — far lower than rivals. Yum has said it plans this year to expand its loyalty program, which helps restaurants grow their customer bases and collect user data for targeted deals.

Meanwhile, Chipotle (CMG) has said that digital orders last year accounted for about half of its orders, or $3 billion in sales. The chain recently announced its own quesadillas will now be sold as a digital-only item through its app or website beginning Thursday.
The Quesalupa is the latest item added to Taco Bell’s menu, which faced a massive reduction last summer. The chain recently announced that a new fried chicken taco will come to menus nationwide later this year, and potato-based items will also reappear Thursday.
Source: Read Full Article