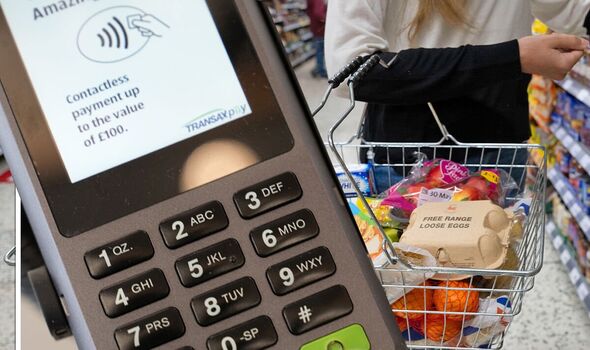 Butters and spreads rose by an “astonishing” 29.4 percent, while milk and cheese shot up by 26.3 percent and 22.3 percent respectively, according to tracking by the watchdog. It comes as Britons are being hit with a double whammy of soaring bills and a fall in income, with many forced to skip meals as they can’t keep up with soaring prices.

Yet supermarkets and the companies that supply them are posting record profits even as their customers are struggling to afford groceries during the cost-of-living crisis.

Jane Hawkes, a consumer expert, slammed the eight major supermarkets for being “selfish” at a time when shoppers need their support more than ever.

She said: “Despite efforts to keep prices low, the cost of everyday essentials is still on the increase – a trend that is unfortunately likely to stick around in 2023.

“The latest data will be tough reading for shoppers who are already being squeezed by high price rises across the board during the cost-of-living crisis.

“Supermarkets selfishly reporting bumper profits while their customers struggle with soaring inflation need to do far more to stem these increases.”

Liberal Democrat leader Sir Ed Davey recently said it was “outrageous” that supermarkets were reporting soaring profits, in a time when families “struggle to put food on the table”.

Sainsbury’s revealed it aims to make around £690 million in pre-tax profit when its full-year results are announced in March.

Rival ‘big four’ grocer Tesco is also projecting its forecast for operating profits of between £2.4 billion and £2.5 billion, compared with a five-year average of £2.17 billion.

Former Iceland boss Bill Grimsey added: “There is enough to suggest some profiteering is going on and who is paying the price for that? The customer.”

Despite both earning the label of a budget supermarket, Lidl and Aldi came out on top with the highest inflation.

Lidl’s prices went up the most in December (21.1 percent), followed closely by Aldi (20.8 percent), according to Which?’s figures.

Neil Kadagathur, co-founder and CEO of Creditspring said that this “huge spike” in the cost of everyday essentials could be the “tipping point” that pushes many more people across the UK into debt.

He said: “As the real value of wages falls further, over a quarter of people are forced to dip into their savings to make ends meet every month – given increasing costs, this figure will undoubtedly rise but we should all be hugely concerned about what happens when the UK’s savings pots run out. “

Which?’s latest Consumer Insight survey also shows that trust in supermarkets is plummeting, from 67 in May 2021 to 42 now.

Price rises emerged as a common reason for a lack of trust, particularly the perception prices were sometimes artificially inflated and went beyond what was necessary for businesses to offset their own rising costs.

Shoppers were outraged when supermarkets upped the prices of nearly 10,000 products in the week directly after Christmas, analysis revealed.

Price rises after the festive period are not “uncommon” as supermarket chains have usually spent several weeks trying to keep prices steady in the run-up to Christmas.

However, this year’s increase, noted by the retail data firm Assosia for The Grocer, was seen as being “unusually” large.

Altogether, around 9,763 products were subject to price rises across the UK’s major grocery chains between Boxing Day and January 6.

This was slightly higher than the 9,103 product price rises recorded in January 2022.

The Grocer Magazine reported that normally shoppers could expect to see only about 5,000 price increases at this time of year.

Which? is campaigning for all supermarkets to ensure budget line items that enable a healthy diet are widely available, particularly in areas where people are most in need.

It is also calling on retailers to make pricing and offers more transparent and provide targeted promotions to support people in the areas struggling the most with access to affordable food.

“Unfortunately, the war in Ukraine has pushed up the cost of many items including wheat, fertilizer, and animal feed, as well as global energy prices, leading to higher prices for man staples.

“Despite these challenges, retailers are determined to support their consumers with the cost of living and provide local communities with easy access to affordable food by expanding value ranges, keeping the price of essentials down and introducing discounts for vulnerable groups.

“Fierce competition for customers is also helping to keep prices as low as possible, despite the spiralling costs retailers face.”

A Tesco spokesperson said: “With household budgets under increasing pressure we are absolutely committed to helping our customers, by keeping a laser focus on the cost of the weekly shop. Earlier this week, we were pleased to be recognised by The Grocer as the retailer doing the most to keep prices down right now.

“So, whether it’s price matching Aldi on the basics, locking the price of more than a thousand household staples until Easter 2023, or offering exclusive deals and rewards through thousands of Clubcard Prices – we’re more committed than ever to providing our customers with great value.”

A Morrisons spokesperson said: “We are working hard to keep prices down and competitive for our customers while maintaining high standards and availability in all our stores.

“Since December we have invested over £16 million to cut the prices on over 50 per cent of our entry-level products to help customers’ money go further.”

An Asda spokesperson said: “Asda has consistently been named the lowest-priced traditional supermarket in independent price comparison surveys carried out by Which? and The Grocer.

“There are a number of reasons why grocery prices vary over time and during this period we also reduced prices on thousands of products.”

An Aldi spokesperson said: “We are the lowest-priced supermarket in Britain. Our customers will always pay less for their shop with Aldi and that is why Which? has named us as the cheapest supermarket in 2022.

“Value is the number one consideration for most households and our promise to our customers is that we will always provide the lowest grocery prices in Britain.”

A Sainsbury’s spokesperson said: “With costs going up, we are working hard to keep prices low. In December we announced that we would invest over £550m by March 2023 into lowering prices as part of our goal to put food back at the heart of Sainsbury’s.

“This forms part of our plan to make sure the items people buy most often are on the shelves at the best prices. Through initiatives such as our Aldi Price Match campaign, Prick Lock and My Nectar Prices, customers can find low prices on everyday staples in stores and online – including frozen vegetables, chopped tomatoes and bread, to name a few.

“Our focus on value means all our customers will find great deals when they shop with us and do not need to go anywhere else to get the best prices on their weekly shop.”