When her Starbucks store in downtown Baltimore reopened last week, Kealea Foy saw too many reasons not to show up for work.

There was still a pandemic going on outside, with models projecting tens of thousands more deaths to hit the U.S. in the coming weeks. Foy didn’t trust customers to observe social distancing guidelines. Her mother is immunocompromised and lives in hospice care. If Foy were serving lattes, she wouldn’t be comfortable visiting her mother even when she’s finally allowed to.

The fact that she had another job to fall back on made it an easy call. Rather than take unpaid leave ― her only other option ― the barista told her boss she wouldn’t be coming back to work, ending her eight-year relationship with the coffee chain, a company she always saw as a decent employer with attractive perks.

“I wasn’t comfortable being pressured,” the 25-year-old said. “If everyone chooses to reopen so quickly and get back to normal when this is all very abnormal, I think we’ll have a surge in cases and this will all be for naught.”

As for Starbucks, “at the end of the day they are just a big business. They are a corporation and they are going to prioritize keeping the company going,” she said.

Starbucks has kept some locations with drive-thrus open throughout the pandemic, and some employees have been working this whole time. But last week the chain reopened the vast majority of stores that were closed and asked employees to report to work. The company is taking new precautions like mobile ordering and contactless pickup to prevent spread of the virus, just as some states begin loosening their lockdown rules.

But HuffPost spoke with a dozen Starbucks workers around the country who wish the coffee chain wasn’t opening its doors yet, even in a limited capacity, while the COVID-19 body count continues to rise. Most of them spoke on condition of anonymity for fear of retaliation from management.

Several said Starbucks is a decent employer that’s done some good things for employees during the pandemic. The company has been more generous than a lot of other big chains. It paid workers who chose to stay home rather than work during April, and until last week offered a $3 an hour premium to those willing to continue clocking in, which is more than what many grocery workers received. 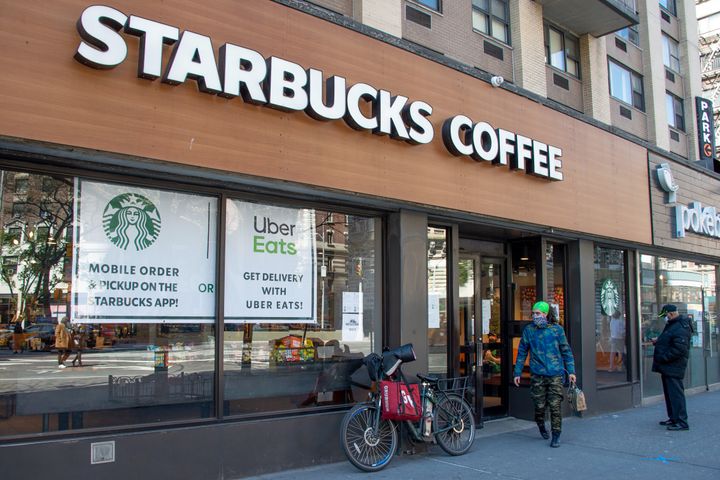 With President Donald Trump pushing for economic activity to resume, against the advice of public-health experts, difficult decisions about whether and how to reopen for business have been left to companies like Starbucks.

The anxieties of Starbucks employees reflect the hard choices workers at restaurants, fast-food chains and coffee shops across the U.S. are making as employers try to return to business as usual. Starbucks employees say the company has now put them in the same predicament facing any other service worker: Work onsite during a pandemic or lose your income.

“This can be said about any service industry professional now,” said Foy. “I think people don’t understand how much they’re really asking of us in the midst of a global pandemic.”

Starbucks closed most stores in late March, after pressure from employees that included a popular petition on CoWorker.org. The company offered to replace workers’ typical wages with catastrophe pay ― a step few other chains seem to have taken, instead steering workers to unemployment benefits.

Last week the chain reopened more than 85% of stores nationwide, a move that coincided with the expiration of the social distancing guidelines the White House had previously recommended. The catastrophe pay would end for employees no longer willing to work after May 3, unless they were sick or met certain other criteria. Most workers would have to burn any paid time off they still had, apply for unpaid leave, or quit.

Reggie Borges, a Starbucks spokesperson, said despite the coronavirus, a lot of the company’s “partners,” as it calls baristas and other staff, are pumped to get back in stores.

“The feedback that we have received from many of our partners this week has been an excitement to welcome back our customers and support the community,” Borges said. “Of course, we’re going to keep listening to them. We want to take their input. The priority for us is creating a safe and welcoming experience for everyone who comes to our stores.”

Only a small percentage of Starbucks locations have in-store pickup as an option, and none are allowing customers to lounge around. A majority are only offering drive-thru or outdoor pickup, where a barista places the order on a table that blocks the entryway. The company said it’s scheduling shifts in blocks to reduce contact among employees, so that one group of partners clocks in separately from another. Employees also said their stores have received hand sanitizer, masks and thermometers.

But there’s no question that even with modified operations, going to work is still a risk many would rather not face.

“The long hours of being exposed feeds into my anxiety,” said a manager at a cafe in upstate New York.

Max, a barista in Chicago who asked to use only their first name, said they had observed a strict lockdown and rarely left their apartment until the Starbucks reopening compelled a return to work. With catastrophe pay running out and no unemployment benefits to tap, Max had to find a way to pay June rent.

Starbucks qualifies as an essential business because it provides food and beverages, just like other restaurants that have stayed open during the pandemic. That means Starbucks generally can operate in a limited capacity even where stay-at-home orders remain in place. But workers like Max don’t believe Starbucks’ core offering ― coffee ― is essential right now, especially when it can be bought at grocery stores.

Starbucks calls its delivery method the “Entryway Handoff” ― workers place orders on the table, then step back and allow customers to pick up their frappuccinos and coffeecakes.

A 24-year-old worker from Connecticut, who went back to work this week, said customers don’t always grasp the concept.

“A lot of people try to take it out of my hand. So I end up touching most customers,” she said. 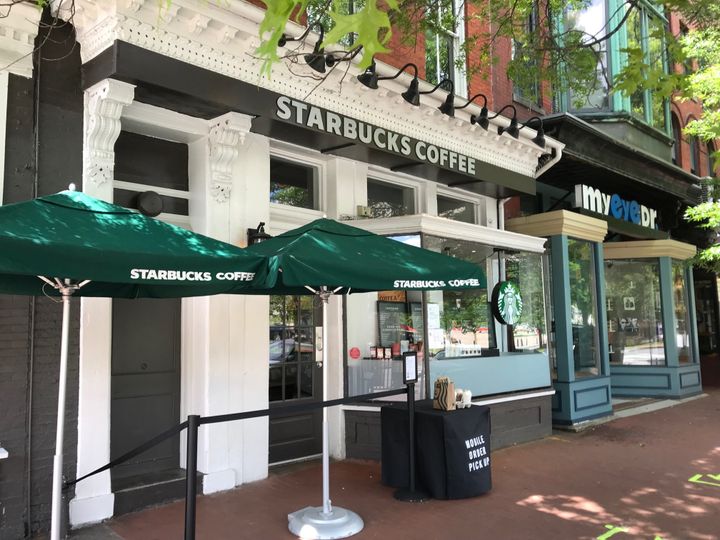 Those encounters illustrate how little control service workers have over patron behavior, and why many are leery of reopening while still in the middle of a pandemic. Starbucks says it has designated an employee to enforce social distancing measures at stores where customers are allowed inside, but even the drive-thru presents its own uncomfortable brushes, workers said.

Max estimates that only about half of drivers are wearing masks when they pull up to the window, even though the transaction requires payment and a handoff. The Centers for Disease Control and Prevention has recommended people wear face coverings in public, and some localities require it. Starbucks has asked customers to wear them but won’t refuse service to those who don’t.

Some workers wish mask-wearing were required, but they’ve been told to avoid confrontations over the issue. (A McDonald’s customer in Oklahoma shot an employee after being told the dining area was closed.)

“Right now in Illinois you’re required to wear a facemask, but we were told Starbucks isn’t the police, so if someone’s not wearing a mask you can’t say anything. That was aggravating,” said Sarah, a 32-year-old woman who works at a Starbucks in a Chicago suburb and has decided not to go back to work.

Some workers complained about the quality of the masks Starbucks has provided them. They described the material as like a T-shirt, and insubstantial enough to get wet and weighed down from regular breathing. “I don’t think that’s safe enough,” said a 38-year-old supervisor in Atlanta who’s been with the company for more than a decade.

And then there are questions of etiquette, which are not peculiar to Starbucks. A worker in Oklahoma said she noticed one customer not wearing a mask even though he had one on his dashboard.

Inside the store, it can be difficult to maintain distance between baristas. They’re in a confined space, bustling around to heat milk, pull espresso shots and grab pastries. And the block scheduling is not always perfect. One worker at a store in Chicago said the teams have maintained separation “but everyone interacts with the manager.”

Another worker at a store in Virginia said someone who worked on her team one day last week had been on a different team the previous day.

“It seems like they’re trying to take reasonable precautions, but I know the most reasonable thing would be not opening,” the worker said.

Unemployment Is Not An Option

Congress has appropriated trillions of dollars to reduce the economic fallout from social distancing, funneling money to corporations and small businesses while also beefing up unemployment insurance specifically so that workers can stay home.

But the way the Trump administration and Republican governors have implemented the law, workers whose jobs ask them back actually can’t stay home. The administration has explicitly said avoiding work for fear of catching or spreading the coronavirus is not a legitimate reason to get unemployment insurance, and several states have asked businesses to report any employees who refuse to come back.

Starbucks has said partners who aren’t ready to return can apply for unpaid leave. Sarah, the barista from the Chicago suburbs, opted for leave because she has a second job working with high-risk elderly patients ― and didn’t feel like working at Starbucks was worth it.

Another worker, a 27-year-old woman in the Atlanta area, said she is “terrified” of returning because in the past employees have not been encouraged to stay home due to illness. “It’s not an environment where you can feel comfortable calling out of work when you’re sick,” she said, adding that she worked through a bout of pneumonia in February.

“The only reason I’m showing up to work right now is because I have to pay rent,” said a 22-year-old barista in Phoenix. “We’re getting $3 more an hour through the month. But COVID isn’t going away after this month.”

Even a relatively mild case of COVID-19 can be debilitating, and Starbucks knew some of its employees would just quit rather than risk it. Executive Vice President Rossann Williams wrote in an April letter to employees that “we must show our genuine empathy for those who need to make the personal decision to leave Starbucks.”

The letter really bothered Sarah, from Chicago, who believes staying home right now is more than simply a personal decision.

“That just felt like a really premature thing to say when we’re still seeing cases rise and the only tool we have to mitigate this is staying away from people,” she said. “It’s a frustrating thing to hear from a company that tries to sell itself as being responsible or ethical.”

Foy, the former barista, said she understands Starbucks needs to get back to business at some point, also thinks it’s still too soon to reopen.

“I’m not an expert in business and finance. I’m sure this is difficult,” Foy said. “But at the end of the day I will always value people’s lives over the profits.”