Kyiv and Moscow (CNN)Russia announced Tuesday that some of its troops would return to base after completing recent drills, but stressed that major military exercises would continue.

The Russian defense ministry said troops from its Southern and Western military districts — parts of which are next door to Ukraine — had begun to return to their home stations, though the announcement did not say precisely where those troops were permanently based, where they had been exercising, or how many of them were withdrawing.
The announcement was met with skepticism by the Ukrainian foreign minister, who said he would believe it when he saw it.

NATO Secretary General Jens Stoltenberg said the alliance had not yet seen “any sign of deescalation on the ground,” but added that “signs from Moscow that diplomacy should continue” were grounds for cautious optimism.

Russia has amassed more than 130,000 troops near Ukraine’s border in recent weeks, according to US estimates, raising fears from Western and Ukrainian intelligence officials that an invasion could be imminent. 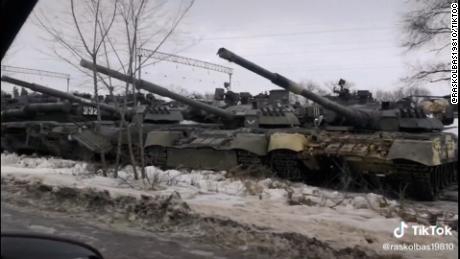 Personnel from Russia’s Southern military district began returning to base from Crimea — the territory annexed by Russia from Ukraine in 2014 — following the conclusion of exercises, state news agency RIA-Novosti reported Tuesday, citing Southern military district spokesperson Col. Vadim Astafyev.
“The personnel of the battalion tactical groups made marches to the areas of railway stations, where the loading of military equipment on the echelons is organized. Heavy tracked armored vehicles — tanks, infantry fighting vehicles and self-propelled artillery — are fixed on the platforms of the wagons, Astafyev said.
Earlier Tuesday, Major General Igor Konashenkov, spokesman for the Russian defense ministry, announced the troop movements but also added that large-scale drills would continue.
“In the armed forces of the Russian Federation, a complex of large-scale operational training measures by the forces continues, with almost all military districts, fleets and airborne troops taking part in them,” he said. “As part of the test of the reaction forces of the Union State, a joint Russian-Belarusian exercise ‘Allied Resolve-2022’ is being held on the territory of the Republic of Belarus.”
Konashenkov also said a series of naval drills — involving surface ships, submarines and naval aviation — was underway both in “operationally important areas of the world’s oceans” and in the waters adjacent to the territory of Russia. “Exercises are continuing with formations and military units at other training grounds on the territory of the Russian Federation,” he added.

Ukrainian Foreign Minister Dmytro Kuleba expressed skepticism about the Russian troop announcement at a news conference in Kyiv on Tuesday.
“Various statements are constantly being made from the Russian Federation, so we already have a rule: ‘Do not hear and then believe. But do see and then believe,'” Kuleba said. “When we see the withdrawal, then we will believe in de-escalation.”

‘Still time to step back from the brink’

Moscow’s troop announcement came a day after Russian Foreign Minister Sergey Lavrov said there was still room for a diplomatic solution to the crisis.
In a carefully choreographed meeting that was shown on Russian television on Monday, President Vladimir Putin asked Lavrov: is there a “chance to reach an agreement with our partners on key issues that are of concern to us, or is it just an attempt to drag us into an endless negotiation process that has no logical resolution?”
Seated at the opposite end of a very long table, Lavrov responded: “If we are ready to listen to some counter-proposals, it seems to me that our possibilities are far from being exhausted.”
NATO’s Stoltenberg on Tuesday expressed hope that a war could be avoided, but said the alliance would not compromise on its core principles.
“Everything is now in place for a new attack, but Russia still has time to step back from the brink, stop preparing for war and start working for a peaceful solution,” Stoltenberg told a news conference in Brussels on Tuesday. 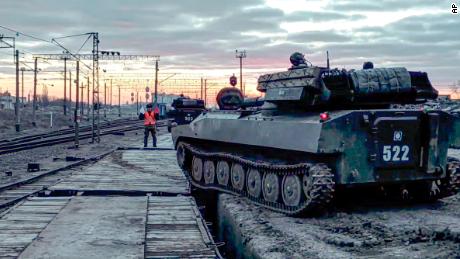 The flurry of high-profile diplomacy continued Tuesday with the German Chancellor Olaf Scholz becoming the latest leader to travel to Moscow for talks.
US ambassador to NATO Julianne Smith said Tuesday the US was “monitoring the situation” after the Kremlin’s troop announcement, but added that the US “will have to verify” any claims of a potential move towards deescalation by Russia.
“We have noticed today that Russia is claiming that they are moving towards some sort of de-escalation. We are monitoring the situation,” Smith said. “We will have to verify whether or not that is in fact the case.
Speaking during a press briefing in Brussels, the US ambassador further noted that Russia “made a similar claim” regarding a potential de-escalation of tensions in December, but this later proved false.
But while the Kremlin was talking about troops returning home, satellite images released by Maxar Technologies revealed fresh signs of a Russian buildup. 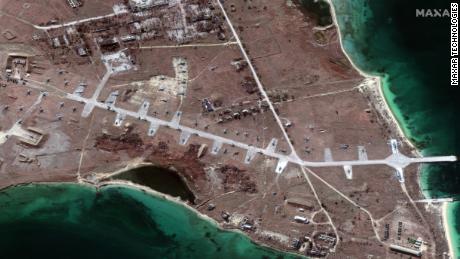 An analysis of the images showed that at least 60 helicopters had landed within the past few days at a previously vacant airbase in Russian-occupied Crimea.
The helicopters are a mixture of transport and attack aircraft. Archival satellite imagery reviewed by CNN indicates the base at Donuzlav Lake on the northwest coast of Crimea has been vacant since at least 2003.
UK Prime Minister Boris Johnson told reporters Tuesday that he was not encouraged by the latest intelligence on Russia’s buildup around Ukraine and said western leaders were receiving “mixed signals” from Moscow.
“We’ve got Russian field hospitals being constructed near the border with Ukraine, in Belarus for [what] only can be construed as a preparation for an invasion,” Johnson said. “You’ve got more battalion tactical groups actually being brought closer to the border with Ukraine, according to the intelligence that we’re seeing.”

Meanwhile, Kremlin spokesperson Dmitry Peskov gave a noncommittal response Tuesday when asked about a move by Russian lawmakers to appeal to President Putin to recognize two breakaway regions in eastern Ukraine as independent. Donetsk and Luhank have been controlled by pro-Russian separatists since 2014.
Asked in a conference call with reporters about the legislative action, Peskov said: “No one remains indifferent to the fate of Donbas. But still, Russia has repeatedly declared that it remains committed to the Minsk package of measures, and that Russia is in favor of the implementation of the entire Minsk plan as soon as possible, in the sequence that exists.”
Source: Read Full Article