Washington, DC (CNN)Following decades of talk about failing infrastructure, the country finally took a major step toward repairing it in 2021, transportation experts say.

The year will likely be remembered in part for the unprecedented investment in infrastructure, including highways, bridges, airports, tunnels and trains. President Biden’s signing of the $1.2 trillion bipartisan infrastructure package in November sparked fresh excitement both locally and at a national level, the experts say.
“Those of us who have been in infrastructure for 40 years have never quite seen the level of investment across the board,” Paul Skoutelas, CEO of the American Public Transportation Association told CNN Business.

Much of the funding will go to repairing and maintaining infrastructure rather than building new things. States will have wiggle room on how to spend what they receive.

The American Society of Civil Engineers published a report card in March on US infrastructure. It gave the country a grade of C- and said there was a $2.59 trillion investment gap. The United States has never received a higher mark than C- since the report card launched in 1998.

Emily Feenstra, the association’s managing director of government relations and infrastructure, told CNN Business that the $1.2 trillion package, to be spread out over five years, would be a “big shot in the arm,” but it would not solve every problem. 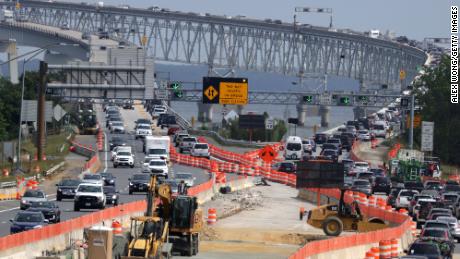 Tom Wright, CEO of the Regional Plan Association, a metropolitan planning organization, told CNN Business that historians may compare 2021 to the historic investment in Interstate highways under President Eisenhower in the 1950s, in terms of leaving a lasting mark on how we travel.
Wright believes the United States is at a pivotal moment, like the 1950s, when new ideas played out in terms of how to develop the country. The 1950s brought a focus on highways, car-centered life, and suburban homes on the fringe of cities. In the last 10 years, Wright said, there’s been a focus on denser living and not always depending on a car, including in the hearts of cities.
“The potential upside is enormous,” Wright said. “But the pitfalls are also very real.”
He said there are risks that the opportunity could be squandered. Bureaucracy and red tape could slow projects and make them exorbitantly expensive. Projects that seemed like good ideas decades ago, but no longer may be, could be funded. Another risk is that if projects aren’t developed fast enough, Congress might take back some funding, and the money’s full potential will go unrealized.
The investments came as leaders grapple with what to do as people change their behavior during the on-going pandemic. Remote work has become more common as well as ecommerce. Traffic on roads and highways is largely back, but public transportation continues to see reduced ridership. National ridership returned to about 63% of before the pandemic this September, but has since retreated to about 50%, Skoutelas said. Many agencies have cut service amid decreased revenue from what passengers pay for tickets.
What will happen in 2022 remains unclear, especially with the spread of the Omicron variant, the experts said. Americans will start to see some impacts of the infrastructure investments, but most won’t surface in 2022 as projects need to be developed.

The year in infrastructure also may be seen as a turning point on climate change. Some investments will be focused on mitigating climate change, including electric vehicle charging.
“This is a down payment on creating a real shift beyond Biden,” said Gabe Klein, a partner at the urban consulting firm CityFi. “It signals to the market that fossil fuels are in the past. The future, not just from the standpoint of saving the planet, but a business standpoint, is electric.”
Source: Read Full Article