Debt funds typically held 0-5 per cent of their portfolio in cash and cash equivalents before this Sebi diktat.
Ashley Coutinho reports.

India’s market regulator has ‘informally expressed its displeasure’ at mutual fund companies depicting the portfolio yield of debt schemes while leaving out the yields on cash and cash equivalents in marketing schemes, said sources.

A portfolio yield is usually calculated by taking the weighted average yield of all the securities in the portfolio, including cash and cash equivalents.

Alternatively, a fund house could market a scheme by only showcasing returns that come from securities other than cash.

“Some schemes have been showing the portfolio yield of a debt scheme while selectively ignoring the yield on cash, thus giving a wrong picture to investors,” said a senior fund executive on condition of anonymity.

“There has been no official communication from either Sebi or Amfi (Association of Mutual Funds in India) on the issue, but the former has informally expressed its displeasure on the practice and asked fund houses to show the true yield of the entire portfolio,” said the executive, referring to the Securities and Exchange Board of India.

Debt schemes, other than liquid and overnight schemes, typically have 10-20 per cent in cash and cash equivalents at different points in time depending on the portfolio need.

Let’s assume the yield on the securities that comprise the 80 per cent is 6 per cent and the remaining portion yields around 3 per cent.

The weighted average of the entire portfolio in this case would be 5.4 per cent (80 per cent of 6 per cent plus 20 per cent of 3 per cent).

If the cash and cash equivalents of the portfolio, however, is ignored, the yield of the scheme can be shown to be 6 per cent instead of 5.4 per cent. 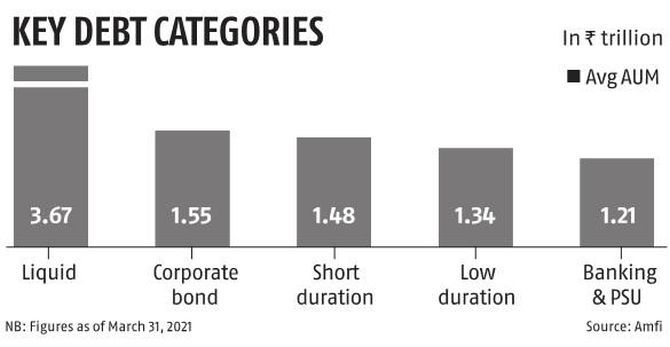 “Returns in debt schemes are inclusive of cash, so the practice of depicting yields minus cash and cash equivalents would not be right,” said a debt fund manager.

“The difference in the overall portfolio yield would depend on the percentage of cash, the interest rate environment and the yield differential between cash and other securities in the portfolio. The greater the differential the more skewed the returns picture would be.”

In a short-term fund, which usually operates in a two-year duration bucket, the yield differential between cash and other securities could be as high as 150-160 basis points, he said.

This could translate to a 15-16 bps higher yield for the overall portfolio assuming a 10 per cent allocation to cash, which is excluded while showing the portfolio yield to investors.

Sebi had in November made it mandatory for open-ended debt mutual fund schemes to hold at least 10 per cent of their net assets in liquid assets from February 1, 2021.

Overnight, liquid, gilt, and gilt fund with 10-year constant duration categories were excluded from the requirement since they hold a higher proportion of such assets.

Debt funds typically held 0-5 per cent of their portfolio in cash and cash equivalents before this Sebi diktat.

A higher proportion of liquid assets can adversely impact returns.

“We do not run a bank fixed deposit product, and fund managers are expected to take risks to generate returns. Higher liquid holdings will impact returns and may compel fund managers to take higher risks to compensate for lower returns,” a debt fund manager had told Business Standard last year.

An RBI paper last year had suggested that debt MFs should be asked to invest a certain amount in assets like government bonds and treasury bills as a buffer against sudden redemption requests.