A dramatic explosion on the sun is revealing new clues about what causes these powerful and unpredictable eruptions, a new study released this week said.

In addition, uncovering the mystery could help scientists better predict the eruptions that cause dangerous space weather conditions here on Earth.

The explosion, which occurred in March 2016, contained elements of three different types of solar eruptions that usually occur separately – making it the first time such an event has been reported, NASA said in a statement.

“This event is a ‘missing link,’ where we can see all of these aspects of different types of eruptions in one neat little package,” said Emily Mason, lead author on the new study and solar scientist at NASA’s Goddard Space Flight Center. “It drives home the point that these eruptions are caused by the same mechanism, just at different scales.”

While jets erupt as narrow columns of solar material, coronal mass ejections form huge bubbles that expand out, pushed and sculpted by the sun’s magnetic fields.

Partial eruptions, on the other hand, start erupting from the surface but don’t conjure enough energy to leave the sun, so most of the material falls back down onto the solar surface. 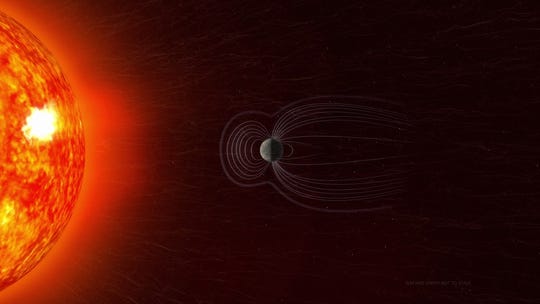 A coronal mass ejection from the Sun impacting Earth. Imagery is not to scale. (Photo: NASA GSFC/CIL/Bailee DesRocher)

In the 2016 explosion, all three types of eruptions happened in the same event.

This is why scientists are referring to the event as a “Rosetta Stone” eruption, which references the Rosetta Stone, an artifact with writing in hieroglyphics, ancient Egyptian demotic and ancient Greek, which helped scholars decipher ancient hieroglyphics at long last, according to Space.com.

“This is of importance to us here on Earth, in particular, because coronal mass ejections release large amounts of charged particles and can interfere with utility grids on Earth and even create danger for astronauts and space technology,” Space.com said.

By modeling the 2016 eruption and others since discovered like it, scientists hope they can figure out what root mechanism causes solar eruptions and determines their characteristics. Finding a trigger could ultimately allow scientists to predict when a large eruption could threaten Earth and Mars several hours in advance – providing enough time for astronauts and spacecraft operators to take precautionary measures, NASA reported.

The new study was presented on June 7, 2021, by Mason at the American Astronomical Society’s annual meeting and has been accepted for publication in Astrophysical Journal Letters.