Today, the cruise ship business is on hold. One of his airlines, Virgin Australia, filed for bankruptcy Tuesday. Another, Virgin Atlantic, the high-profile trans-Atlantic shuttle, is asking for financial assistance from the U.K. government.

Mr. Branson, 69 years old, became one of Britain’s best-known billionaires by putting his Virgin brand on an array of businesses, including planes and trains, cola and bridal gowns, often taking an equity stake and licensing fees in exchange. Several of his biggest forays are focused on travel and tourism. Amid the new coronavirus pandemic, he now finds himself at the epicenter of the meltdown in those industries.

“This is the moment of truth” for Mr. Branson, said Tom Bower, an author who has written a book about him.

This week, Mr. Branson said he planned to borrow money against his private island in the British Virgin Islands to save jobs at his portfolio companies. He bought the island when he was 29.

“Over the five decades I have been in business, this is the most challenging time we have ever faced,” he wrote in a letter to his employees, posted on his group’s website.

In the letter, he pleaded for state aid from the Australian and U.K. governments to help his airlines weather a collapse in bookings and tight travel bans instituted by many counties to slow the pandemic. Addressing criticism from U.K. lawmakers that Mr. Branson himself should be the one bailing out his company, he said his own net worth is calculated “on the value of Virgin businesses around the world before this crisis, not sitting as cash in a bank account ready to withdraw.”

Mr. Branson’s net worth is estimated at around $3.7 billion to $4.3 billion, according to a Virgin spokesman. The spokesman said Mr. Branson was using his assets to raise funds, including the plan to take out a loan against his island. He has also liquidated a number of instruments and financial holdings, the spokesman said.

On Tuesday, Virgin Australia entered bankruptcy administration after lawmakers there refused financial aid. They cited the airline’s large foreign ownership. Virgin owns 10 percent of the carrier, Australia’s second-largest after Qantas Airways Ltd. The other 90 percent is owned by foreign airlines like Abu Dhabi’s Etihad Airways, Singapore Airlines Ltd. and Chinese conglomerate HNA Group Co. The carrier employs more than 10,000 staff and controls just under a third of the domestic market.

Its sister carrier, U.K.-based Virgin Atlantic, is 51 percent owned by Virgin Group, based in the British Virgin Islands, and 49% owned by Delta Air Lines Inc. It is asking for financial assistance from the U.K. government to stay afloat. Virgin Atlantic, a thorn in the side of flag carrier British Airways since its formation in the 1980s, had been on track this year to post its first profit since 2016.

But like many airlines, the coronavirus has wiped out its ability to operate. It has grounded about 85 percent of its fleet. Last week, it was operating a handful of passenger flights. This week, its only flights were for moving cargo.

Virgin Atlantic has been the most vocal of Britain’s carriers in calling for the government to step in and bolster the industry. The U.K. has balked, saying a rescue was a last resort and should follow efforts to secure fresh cash from existing investors.

A Virgin Atlantic spokeswoman said talks over funding were “ongoing” and “positive,” with a decision due to be made by the government early next month. Delta said it “remains supportive of our partner airlines and their efforts to gain needed financial support.” 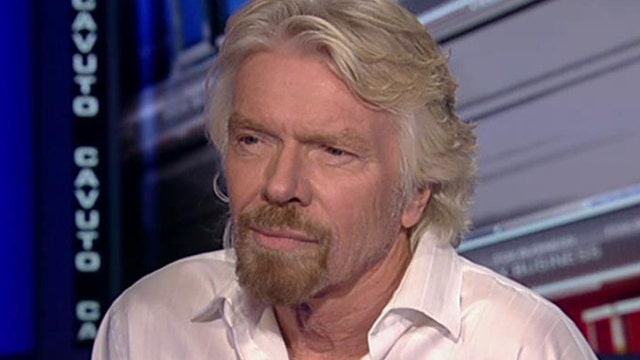 Though not Britain’s richest businessman, Mr. Branson is among those with the highest profile. He left his private school at 16 and set up a magazine called “Student,” using it to sell vinyl records in what would be the start of his first big business, the Virgin Records chain of stores, and then music label.

When Mr. Branson moved into airlines and tourism, the long-haired and goateed businessman became a key part of the brand. He courted media coverage for his businesses through a series of high-profile stunts, including a hot-air balloon ride across the Atlantic in 1987. Mr. Branson eschewed suits, wearing jeans and casual shirts, and the country warmed to him.

“He was the cheeky chappie, the anti-establishment man who won over people who did not like the establishment,” said Mr. Bower, the biographer.

Christian Stadler, a professor of strategic management at Warwick Business School, describes Mr. Branson’s business model as being most like that of a venture-capital fund. “But they put money into companies and see how they go. He is smart and doesn’t put money into his ventures,” he said.

Instead, Mr. Branson often just effectively leases out his Virgin brand name to businesses, taking a fee or equity stake for doing so.

Mr. Branson has started more than 400 companies, including over 60 current businesses, according to the website of Virgin Group. These Virgin companies include more than 71,000 employees in 35 countries and generate $24 billion in annual revenue, it says. News Corp, the owner of The Wall Street Journal, has a commercial arrangement with Virgin Group licensing its Virgin Radio brand.

The cruise business was one of Mr. Branson’s most recent ventures. The Scarlet Lady was set to make its first voyage from Miami to the Caribbean in April, in a business that Mr. Branson said he had dreamed of entering since his 20s. Now, that ship is sitting off the coast of Florida, joining hundreds of other cruise vessels currently idled by the coronavirus.