England’s high streets returned to business slowly and tentatively on Wednesday with queues outside some Primark stores as they became some of the first to open their doors at 7am.

Stores in England are reopening after the month-long lockdown brought in by the government in its latest effort to control the spread of Covid-19.

While there were reports of queues outside some Primark stores in Newcastle and Birmingham, only about 20 masked people queued outside Primark’s Oxford Street branch in London, with almost as many press photographers as shoppers. 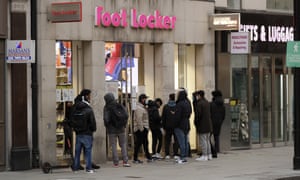 A number of stores, including Forever 21, Schuh and several former tourist gift shops remain permanently closed on London’s main shopping street, which has been hard hit because tourists and commuters have been kept away by travel restrictions and the shift to working from home.

Standing in the queue outside the cut-price fashion store, which was still bringing in trollies full of Primark stock after the doors opened, Gabriella Abrile, 21, said “I’m so excited. It’s a very good store. I’m here to buy gifts.”

Several other shoppers said they were popping in on their way to work. Tracey Banks, 57, said she had been keen to get back into stores as “I’m old, I like to touch and feel things. I don’t like to just look at a picture.

“I’m going to get some Christmas pyjamas to make sure I get them before the mayhem starts. I’m surprised there is only a little queue. I expected it to be much bigger,” she said.