San Francisco (CNN Business)Pork, much like everything else these days, has gotten more expensive due in part to the supply chain issues and inflationary pressures spurred by the pandemic.

And now comes another wildcard: The pork industry’s ability — and desire — to adapt to a new animal welfare law in California, its largest US market.
The voter-approved measure taking effect on January 1 requires pork products sold within the state to adhere to standards that mother pigs are given at least 24 square feet of space each and kept out of gestation crates — 7-by-2-foot stalls where their movements are severely restricted.
Pork producers are already warning that the new law brings added costs throughout the supply chain that will ultimately leave Californians and other shoppers in the US with fewer and more expensive options.

By and large, there are going to be long-term impacts from this, no matter what."

The bacon battle brewing in California has some believing the Golden State’s pork supply chain is teetering on the edge of precarious to outright calamitous: “The Great California Bacon Crisis,” could “mean the end of bacon,” bring about the “bacon apocalypse,” or make the breakfast staple “disappear” from Californians’ tables.

Those extremes might likely be hogwash — some economists predict California consumers could end up paying about $8 more for their annual pork purchases — but the law isn’t inconsequential.
It’s the latest in a line of animal welfare-focused moves that could change how pork is raised and sold in the US.
“By and large, there are going to be long-term impacts from this, no matter what,” said Trey Malone, an assistant professor at Michigan State University’s Department of Agricultural, Food and Resource Economics. “This is something that the entire agricultural industry is paying close attention to.”

The issue had gained some momentum before but it really heated up in 2018, when California voters approved Proposition 12, which prohibits confining egg-laying hens, veal calves and breeding pigs in a “cruel manner,” establishes criteria for proper living conditions and bars the sale of eggs and meat products from animals that weren’t raised by such standards.
Some of the minimum housing space requirements for hens and calves went into effect January 1, 2020, with the second batch of regulations — notably calling for cage-free hens and crate-free hogs — slated for the first of next year.
When it comes to hogs, California’s Proposition 12 requires that at least 24 square feet of space be given for each breeding pig and calls for the elimination of gestation stalls for pregnant pigs. 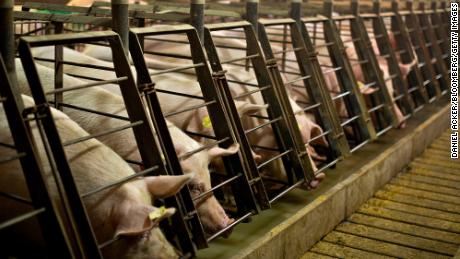 The gestation stalls — metal enclosures where the pig stands atop slatted, concrete floors — are typically 7 by 2 feet in size. Depending on how many times they’re bred, a female pig can spend the majority of her life in these small enclosures, animal welfare groups argue.
In these stalls, a 400-pound pregnant pig can feed, stand, sit and lie down, but it does not have the space to walk, move about freely, socialize or turn around.
“Some pork producers just won’t let mother pigs turn around,” said Josh Balk, vice president of farm animal protection for the Humane Society of the United States, which has been behind many of the ballot measures. “That’s it. Everything comes back to that point; and frankly, ordinary Americans think that’s a barbaric way to treat them.”
Still, the practice has become an industry standard, with more than 75% of pregnant sows being housed in these individual stalls, according to the US Department of Agriculture.
Pork farmers and producers say the stalls allow them to monitor the health, food intake and well-being of individual pigs during the pregnancy process. They argue that there are also increased risks — such as aggression, competition for food, and disease — when pigs, especially pregnant sows, are in group environments with others.

Pork producers are not ready

What’s unique in California (as well as Massachusetts, where a similar law was passed in 2016, but recent legislative efforts hope to delay its implementation to January 1, 2023) is that the Prop. 12 regulations apply to both local and out-of-state producers who want to sell within the state.
Egg producers are prepared to meet California’s January 1 deadline for cage-free eggs; however, the same can’t be said for the broader pork industry, according to analysts from Rabobank, an agribusiness-focused financial institution. Christine McCracken, a senior analyst focusing on the animal protein industry at Rabobank, pinned the pork industry’s preparedness at no more than 5%.
Part of the problem: Since voters approved Prop. 12, the California Department of Food and Agriculture has been slowly progressing through its standard operating procedures. It’s been gathering stakeholder input, hosting workshops, studying the economic impact, publishing draft regulations, and holding more public hearings.
“The initial regulations were supposed to be completed by September 1, 2019, but that timeframe was too short to meet all of the steps legally required,” Steve Lyle, a CDFA spokesperson said in an emailed statement.
Because the regulations have yet to be finalized, businesses throughout the pork supply chain have been reluctant to make infrastructure investments or lock in long-term deals, McCracken said. And once they decide to comply with Prop. 12, it could take some time for farms and plants — especially ones that struggled during the pandemic — to make the upgrades, she said.
“High construction costs, labor constraints and a lack of visibility around the final rules have all played a role in the delayed industry response,” McCracken wrote in an email. “Many in the industry speculate that, like Massachusetts, there will be a last-minute effort to delay the rollout of the regulation.”

Low-income shoppers will be hit hardest

California’s regulations apply to whole pork meat — bacon, ribs, shoulder, chop, shank, etc. — sold at retail. There are carve-outs, though: certain products, such as lunch meats, sausages, hot dogs, cured ham and salami, and pizza toppings are excluded from the provisions.
Within California, the law could lead to a decline in the number of options, result in fewer niche offerings, and could make certain pork products too expensive for lower-income people, further limiting their access to proper nutrition, said Michigan State University agricultural economist Trey Malone.
“What’s really happening is we’re basically trying to restrict the lower-cost choices,” Malone said. “It’s the poor people who are most likely going to be affected by these policies.” 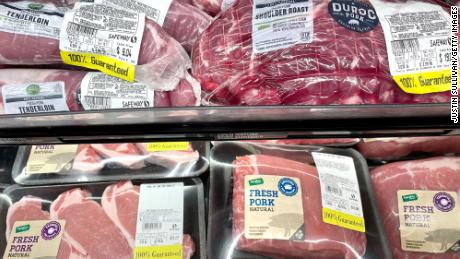 As to how this could play out, Malone sees a corollary in California’s 2015 implementation of a law that required hens to have more room in their enclosures.
Rabobank researchers found that, in the months following the new law, egg prices more than doubled in California and nearly did the same elsewhere in the US before settling back down to normal in the following year, according to a research note on Prop. 12 published earlier this year.
“If states decide to follow suit with California, we could actually see an increase in the price of pork across the board,” Malone said.

The cost of bringing home the (crate-free) bacon

The pork companies have taken their plight to the courts, alleging the law violates the Dormant Commerce Clause, which prevents a state from passing legislation that restricts interstate commerce. The legal challenges haven’t been successful thus far. Still, industry players are persisting: Earlier this month, the National Pork Producers Council and the American Farm Bureau Federation petitioned for the US Supreme Court to hear their case against Prop. 12.
In that petition, they argued that the proposition in California, a state that consumes 13% of the nation’s pork but produces only a small fraction of it, will drive up costs for the entire industry by about $13 per pig. The burden, they argue, will land on out-of-state producers.
As a result, they say the supply-demand disruptions will raise prices for consumers both inside and outside of California.
In Iowa, the nation’s largest supplier of pork, producers and senators have been in vocal opposition of the new law.
Economic impact reports backed by some of the pork industry’s leading trade groups have projected renovations could run about $3,500 per sow, cut supplies in half and cause price hikes in the range of 50% to 60% in California.
But other studies by outside groups and the state of California indicate that a lot of the cost concerns from the industry may be largely overblown. 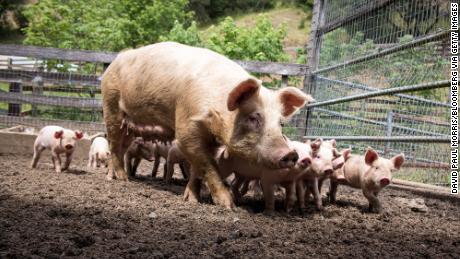 The California Department of Food and Agriculture projects Prop. 12 to result in higher costs for some consumers, producers, schools, prisons, and the state itself. However, those increases are expected to be marginal.
California’s economic impact projections found that Prop. 12’s provisions are likely to increase an individual resident’s food cost by $50 annually, with the lion’s share ($40) being attributed to the new cage-free egg standards. The pork and veal changes are expected to cost consumers about $10 more per year, according to the report.
A trio of economists at the University of California Davis College of Agricultural and Environmental Sciences estimate the annual costs to consumers in California will be about $320 million annually, or about $8 more per person. They also project consumers in the state will buy about 6.3% less pork.
Outside of California, the economists say the effects will be negligible.
“There may be a brief period of disruption [when the regulations start Jan. 1], but nothing like the apocalyptic predictions of significant long-term shortages or drastically higher prices,” Richard J. Sexton, report co-author and distinguished professor of agricultural and resource economics at UC Davis, told CNN Business.
Just as Prop. 12’s potential negative impacts appear to be overstated, the same could be true for the positives, Sexton said.
The producers that are the likeliest to supply to California are those that already have pigs in group housing, where pigs can roam more freely among other pigs, he said. The adjustments would be less costly for them versus a large-scale conversion of facilities outfitted with stalls.
“We’re really not doing much of anything to give more space or improve the lives of hogs, because the converters are the people that already have group housing,” Sexton said.

The future of pork

California and Massachusetts’ regulations aren’t happening in a vacuum. The European Union, Australia, Canada, New Zealand, and nearly a dozen states have passed laws to ban gestation crates for mother pigs, and some big-name food businesses — McDonald’s, Whole Foods and Chipotle, to name three — have made similar pledges, according to UC Davis.
In addition, some pork companies, like the Perdue-owned Niman Ranch and Coleman Natural Meats already comply with the regulations and others expect to — including some producers for Tyson. 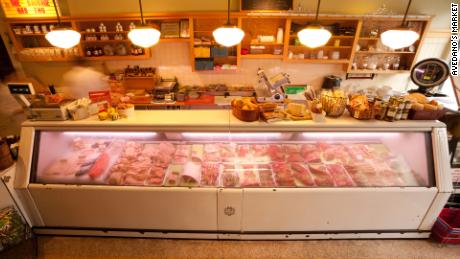 When addressing an analyst question on Prop. 12 during the company’s most-recent earnings call, Tyson CEO Donnie King said the measure is “not something we were excited about, but we can align suppliers, and we can certainly provide the raw material to service our customers in that way.”
At Avedano’s Holly Park Market in San Francisco, the pork that’s sold at the butcher shop is pasture-raised, said owner Angela Wilson. So, the shop won’t see much of an effect from Prop. 12.

People in the United States aren't used to paying the true cost of food, pork being one of them."

But Wilson’s shop has experienced higher costs (to the tune of about 10%) due to heightened inflation. She’s done what she can to absorb the added expenses; however, that mostly involves operating in the red.
Wilson is a butcher who ultimately wants people to eat less meat. It seems counterintuitive, but she has her reasons: namely labor costs, climate change, and food waste.

“People in the United States aren’t used to paying the true cost of food, pork being one of them,” she said. “Trying to do what’s right and put the true dollar amount on work and workers and labor is really difficult in our economy.”
Source: Read Full Article