Politicians have always utilized the most effective methods of communication. Franklin Delano Roosevelt famously rode the country’s radio waves to soothe fears and inspire the nation during World War II, and John F. Kennedy rose to power in part because of his performance on prime-time TV.

This was most clear when Rep. Alexandria Ocasio-Cortez rose to fame in 2018. As a newcomer — and in tandem with highly effective door-to-door efforts — her online campaign was crucial in the defeat of a 14-year Democratic incumbent who spent 16 times more money than her.

Years later, she’s kept that momentum rolling into over 13 million followers across all social media. She schools followers while playing video games on Twitch, addresses serious issues on Instagram, and of course, dispatches some brutal dunks on Twitter. She posts, and she posts effectively. Prominent Democrats have smartly followed in her footsteps.

In the wake of the left’s online adoption, Republicans too have joined the chorus of politicians aiming to post. The only problem is that they don’t really have anything to post about. As my colleague Josh Barro recently wrote, the post-Trump GOP hasn’t identified any policies they’d like to organize around. Without any semblance of direction, their posts have become purely self-serving, which is bad if your job is to serve.

Consider newly minted Republican Rep. Madison Cawthorn, who in January typed the following sentence out in full, presumably reviewed it with his team, and still decided to post.

There is certainly space for (attempts at) humor in the political folds of social media. But it’s hard to believe Cawthorn cares about free speech when this is how he makes use of it. Instead of communicating anything resembling a vision for the country, his tweet proves that he’s just exploiting his position as a lawmaker for his ultimate goal: raising more money to win more races to do more posts.

This wouldn’t be nearly as problematic if Cawthorn were, say, a TikTok star, and not a congressman. You see, congresspeople have actual jobs. They represent their constituents in DC and are in theory there to fight for the things those constituents believe in. But instead of pursuing actual legislation, it seems Cawthorn is merely in DC to promote himself via posting. In fact, in an email obtained by Time, Cawthorn outright told GOP colleagues: “I have built my staff around comms rather than legislation.” As these may be the same staffers featured in Buzzfeed’s report on Cawthorn’s alleged sexual misconduct in college, that’s not a great look.

And when you see the merch Cawthorn was promoting in his tweet — COVID masks that say “useless” and MAGA-style hats that say “Make Elections Secure Again” — it’s clear that his actual job comes, at most, second in priority. Cawthorn aims to be a Republican celebrity, not a Republican representative.

To be clear, Democrats have also been known to troll online too. However,  there’s usually a message or call to action behind it. This is not the case for Republicans.

Take Florida Rep. Matt Gaetz, who in early February posted a video of him formally requesting that the House Judiciary Committee recite the pledge of allegiance before every meeting. 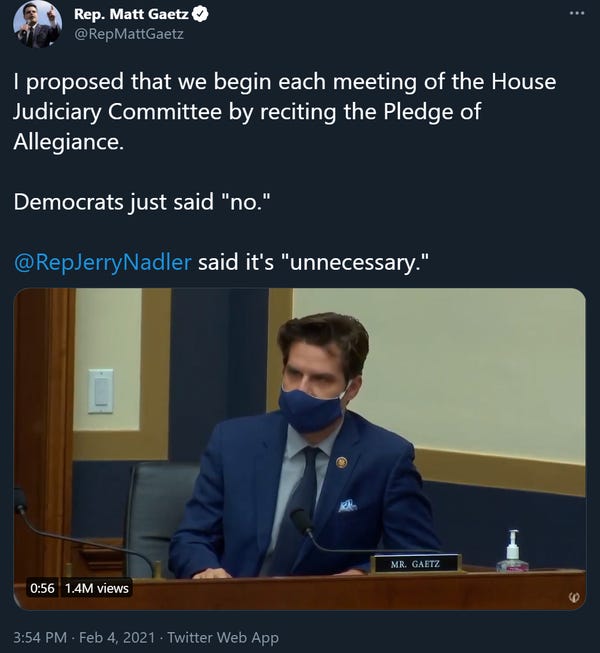 We’ve reached a point where the desire to post is so great, that Republicans are doing things in real life for the sole purpose of posting about it later. How do I know we’ve reached this point? Because the House Judiciary Committee already does the pledge of allegiance before the day’s meetings. Gaetz’s request to do it before each meeting was only made so that he could post about Democrats not wanting to do the pledge of allegiance. It’s the kind of foolery Gaetz is known for, but it’s also a terrible waste of the power of posting.

And it’s not just in the House. As I’ve written about before, Sen. Ted Cruz’s “Pittsburgh > Paris” social media campaign is another perfect example of the “posting > policy” mentality taking over the GOP.

Posting with a purpose

A lawmaker’s posting should be a tactic to advance policy; it should be utilized to try and improve the lives of the people they serve.

Take another example from aspiring influencer Cruz. When Texas was hit with freezing temperatures, causing widespread power outages and leaving children to literally freeze to death, Cruz, one of two senators from the state, decided to hop on a flight to Cancun. Thanks to the social media platform he tries to champion, he was caught red-handed waiting for luggage at an airport.

Even after admitting his mistake, some pundits still defended the move. For instance, podcast throne-holder Joe Rogan asked “Here’s the thing: what can Cruz do?”

The answer is not only simple, it’s also what Ted Cruz has done the entire year anyway: post! Surely the 2024 hopeful could have used his online platform to actually help his constituents in need. AOC and former Cruz challenger Beto O’Rourke did just that, raising over $5 million to help Texans who are still suffering in the cold.

It’s so easy to post — perhaps too easy — but for people occupying some of the most powerful positions in our democracy, there should be some thought put behind it. New platforms are constantly on the rise, creating new ways of communication and, as we discussed earlier, an effective social media strategy can literally win you a seat in congress.

Despite this, instead of posting to enact change, like AOC and O’Rourke did with their Texas fundraiser, Republicans are far more interested in promoting themselves and trying to go viral.

None of this is surprising, given the right’s bad-faith shenanigans that we’ve become painfully accustomed to, but one can’t help but wonder what kind of impact these people could have on the lives of their constituents if they put as much effort in helping people as they do in “owning” liberals online. It’s a tragic outcome made possible by the right’s apathy towards the people who voted them into office. To Republicans, celebrity is more valuable than servitude.