‘Today everybody is fearful of making economic decisions.’
‘Nobody is buying anything; forget TV, fridge, people are not even buying apparel or footwear.’
‘Demand is not going to rise when there is so much of uncertainty in the market.’

What is the state of the economy? Where are we heading?

Professor Shamika Ravi is a Non-Resident Senior Fellow of the Governance Studies Programme at the Brookings Institution, a Washington, DC-based think-tank with offices in India, and a former member of the prime minister’s Economic Advisory Council.

“The job of the government is to continuously provide information about the disease which will automatically translate into demand,” Professor Ravi, below, tells Shobha Warrier/Rediff.com. The first of a two-part interview:

As a former member of the prime minister’s Economic Advisory Council, are you concerned about the current economic situation?

I am deeply concerned about the current economic situation because we are in the midst of a pandemic.

Whether it is the government or the individuals or business firms, everyone is operating under lots of uncertainties.

That makes the economic stabilisation process — I do not want to say economic revival — and the management of the situation much more challenging.

For the first time since 1979, the economy has contracted.
According to the IMF, the contraction will be 4.5% in the financial year, but some economists say the contraction can be anywhere between 15% and 20%.

In these uncertain times, every time these economic bodies or multinational institutions make forecasts, they are forced to revise within the quarter itself.

If you remember, in March the IMF said we would still be growing at 1.9%. At that time, I remember mentioning that it was too early to make such predictions given the nature of the pandemic.

Based on past trends alone, you cannot make economic forecasts. You will go wrong if you make predictions without taking into consideration the nature of the pandemic, and what it means to the economic uncertainties.

So, we have to look at the pandemic itself to predict what will happen to the GDP. Any model which does not look at the evolution of the pandemic will be continuously giving us wrong estimates or wrong predictions.

Though we still do not know many things about the pandemic, we do know our institutional capacity. We should be in a position to do a better job of forecasting if we look at the preparedness we have within the health sector.

If we use the information that we have the necessary capacity, to assuage the fear in the market, you can reduce the uncertainty in the market. But we have not done that.

The general feeling is that because there is no demand in the market, the uncertainty continues. Though the government talks about green shoots appearing, nobody else sees them.
Many economists suggested direct transfer of money to the needy to create demand. Do you agree with this?/p>

I don’t agree with the idea. When you speak of demand, you have to also understand consumer behaviour.

Given the uncertainty and fear in the minds of people, even if you directly transfer money into the accounts of people, it is unlikely to translate into a significant increase in demand.

That’s because we know from consumer behaviour that because of so much uncertainty all over, precautionary savings are likely to happen rather than active demand in the market.

The story right now is not about demand alone. We have to look into consumer behaviour, market behaviour and risk management under these uncertainties.

Do you feel the road ahead is tougher for India compared to many other countries because of the social disparity that exists in Indian society, and also because the country had to experience not just a health crisis but a humanitarian crisis too?

No, I don’t think our recovery will be a difficult one.

But before that, what we need to do is manage the uncertainty in the market.

How do you manage the uncertainty in the market?

The government should give daily information on the number of beds available in hospitals in every district, in case citizens fall sick and need hospitalisation.

This information should be verifiable, credible and put out daily. 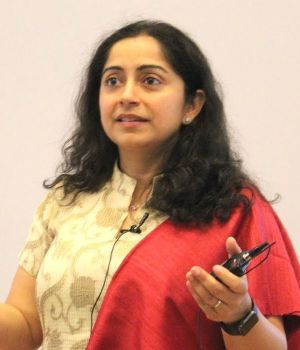 There should also be information on how many people out of hundred need hospital care.

If individuals know that if they contract the virus and fall sick, there are beds available in the hospitals, they feel safe. So, there will not any fear or panic.

Our mortality rate is significantly lower than Western Europe or the US or Mexico.

From the ICMR antibody surveys, it is found that the infection is far less deadly than what is commonly believed.

This is information that should be translated and communicated to people. That is how you manage the uncertainty.

Today everybody is fearful of making economic decisions.

Nobody is buying anything; forget TV, fridge, people are not even buying apparel or footwear.

Demand is not going to rise when there is so much of uncertainty in the market.

So, the job of the government is to continuously provide information about the disease which will automatically translate into demand.

Most of the vendors and producers are operating at below capacity right now because there is no demand in the market.

What about the segment for which livelihood is more worrisome than the virus?

That’s why we have to talk about demand for each market segment separately.

When you talk about travel, consumer durables, etc, we are talking about a segment for whom it is not the fear of livelihood that deter them from spending.

If you take the bottom 40% of the consumer segment, they are dependent on the informal market, and the informal market has gone through a lot of uncertainties and contraction. It is very much a hand to mouth existence for this segment.

Here we have to look at all the economic packages including the free PDS that were announced from March onwards by the government.

What is the current status of all the announcements? How much money has been transferred to each state? How many people have benefitted?

Do we have this information?

There so much uncertainty because we do not know the extent of transfers that have happened so far to the bottom 40%. Yes, the announcements were there, but we do not know what happened after that.