After all of the speculation and adamant proclamations by analysts that the San Francisco 49ers would use the third overall pick of the NFL draft on Alabama quarterback Mac Jones, draft day finally arrived, and with it came the selection that stunned many around the league but felt just right for Niners brass.

San Francisco, one of the NFL’s most storied franchises, snatched up one of the draft’s great mysteries in North Dakota State’s Trey Lance and crowned him as the quarterback of the future.

The move proved surprising only because of all of the pre-draft smokescreens, which the 49ers welcomed. Coach Kyle Shanahan found all of the Jones projections comical, and he welcomed the freedom that the reports afforded general manager John Lynch and him to conduct their research on Lance.

“We weren’t going to look to correct that, at all,” Shanahan told reporters with a snicker.

The 49ers certainly did their homework on Jones. But something about that move never made complete sense because of the Alabama’s limited potential.

But when San Francisco decided to part with three first-round picks and a third-rounder so the team could move up to third overall, their intentions seemed clear: secure a truly transformative quarterback.

The word “potentially” is key here. Because although special, Lance also is a project.

NFL DRAFT TRACKER: Instant analysis on every pick in the first round 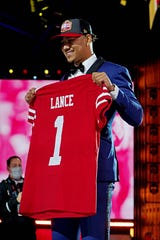