If there were an Olympics for bank frauds in India, Rishi Agarwal, founder and former chairman of ABG Shipyard Ltd, a nephew of the Ruia brothers of the Essar group, would bag the gold, pushing Nirav Modi to his right, says Tamal Bandyopadhyay. 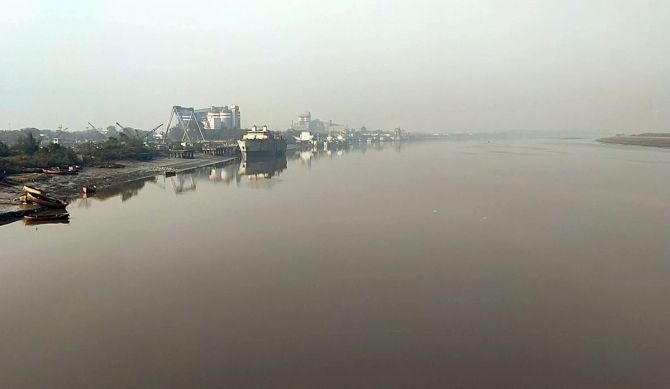 At the Olympic Games, the champion stands on the highest step in the centre to receive the gold medal.

The runner-up stands to the winner’s right for the silver, a step below; and the one placed third stands to the left and receives the bronze.

If there were an Olympics for bank frauds in India, Rishi Agarwal, founder and former chairman of ABG Shipyard Ltd, a nephew of the Ruia brothers of the Essar group, would bag the gold, pushing Nirav Modi to his right.

The alleged fraud has all the usual elements: The creation of close to 100 associates, affiliates and subsidiaries; diversion of funds for money laundering; ever-greening of bank loans; and creating personal assets.

But the modus operandi is very different. It could teach Modi, now the dethroned king of bank fraud, a lesson or two.

The circle of beneficiaries here is rather large. In fact, it’s not a circle; it’s a polygon.

Let’s review the vital statistics of the alleged fraud first.

Agarwal was rather democratic in his approach when it came to using the system.

The entire exposure turned into a non-performing asset (NPA) on the banks’ books in November 2013.

The lenders first tried to rescue the group through corporate debt restructuring (CDR) whereby a stressed loan is typically recast by paring interest rates, stretching the maturity, converting part of debt into equity and even swapping the currency (replacing rupee loans with dollar loans). As the efforts failed in 2016, the exposure turned into an NPA, effective 2013.

A forensic audit by Ernst and Young LLP in 2018 exposed the real story, prompting the lenders to classify the account as fraud between March 2019 (Exim Bank) and March 2020 (Andhra Bank, now merged with Union Bank of India) before handing over the case to the Central Bureau of Investigation in August 2020.

After a thorough investigation, the CBI registered the case in February 2021, booking ABG Shipyard and its holding company, ABG International Pvt Ltd.

While the scale of the alleged fraud and the time taken between declaring the exposure as an NPA and involving the CBI have created a political storm, the liquidation process has already started under the insolvency law. Meanwhile, all the lenders have provided for the bad loan.

ABG Shipyard was set up on March 15, 1985 as Magdalla Shipyard Pvt Ltd.

As the business grew, Agarwal moved up the value chain from ship repairing to ship building.

To consolidate the ship repair business, he took over Western India Shipyard of Nandan Gadgil by acquiring around 40 per cent equity from ICICI Bank Ltd, the lead lender.

The acquisition made sense since it had certification to repair ships and vessels of the navy and Oil and Natural Gas Corporation Ltd, and facilities to operate in all weather conditions with adequate draft (depth of sea) for berthing larger vessels.

But why did he venture into cement making?

ABG International Pvt Ltd, the promoter’s investment company, floated ABG Cement Ltd to commission a modern 3.3 metric tonne per annum clinker facility at Kutch and a 5.8 metric tonne grinding facility at Surat, and a jetty at the grinding unit.

With a captive limestone mine at Kutch (four km away from the proposed clinker plant) and evacuation option of the sea route through Mudra, the closest port (two km away) and Bhuj Railway Station (140 km away), the logistics network was perfect to transport to the grinding unit at Mora near Surat.

With the preferred transportation of clinker being through sea, as part of the project, the jetty was built to service the grinding unit where small bulker ships would discharge the clinker.

Was this project conceptualised to support the extended family group, which was also plying dry bulk ships?

The ABG group coined the narrative of ‘soft launch’ for the cement plant — unheard of in the manufacturing sector — but the lenders were convinced and didn’t mind time and cost overruns.

ABG Energy Gujarat Ltd, an associate company, proposed to set up a 100-MW coal-based power plant in the premises of the cement plant both at Kutch and Surat to meet the captive requirements of cement manufacturing.

This was done to secure subsidies awarded to captive power plants and ensure that it made money independent of the cement plant, plagued with many issues.

Most of the subsidiaries were floated for both fund-raising and non-fund-based facilities such as guarantees from lenders of all hues.

Orders from Essar Shipping for building bulk carriers, and jackup rigs and offshore vessels from TAG Offshore Ltd (a company formed by the demerger of the offshore business of Essar Shipping, owned by Agarwal’s cousin, Shamik Apparao) boosted sales and raised valuations.

It’s another story that no jackup rig was ever built, let alone delivered to Essar Oilfield Services Ltd.

Innovations and aggression were in Agarwal’s DNA.

Leveraging the family background, he mastered relationships with the lenders with finesse.

For ICICI Bank, Agarwal played the role of a white knight during the takeover of Western India Shipyard Ltd.

The bank turned part of the debt into equity, extended the tenure and provided other sops. IFCI participated in equity and offered debt to the greenfield cement project.

Agarwal, with a mere 2 per cent equity, made an audacious bid for Great Offshore Ltd in 2009, which led to a legal battle with Bharati Shipyard Ltd.

This happened when the promoter of Great Offshore defaulted to Infrastructure Leasing & Financial Services Ltd.

Had Agarwal been successful in taking over Great Offshore, ABG Shipyard would have been the quasi owner of Bharati Shipyard, expanding his empire as the sole private sector shipbuilder in India.

Agarwal launched his business with a modest loan of Rs 1 lakh from the State Bank of India to buy Magdalla Shipyard for Rs 8 lakh, on his uncle Shashi Ruia’s advice.

A vintage car lover, Agarwal boasts of owning a 1928 Cadillac V8 Series 341, previously owned by the former maharaja of Burdwan in West Bengal, one of the most original Cadillacs of its time in India.

He studied at Purdue University in Indiana, the alma mater of Neil Armstrong — the first human to step on the moon.

Will he be around, mulling over the lost empire and collection of vintage cars, or will he join Nirav Modi in some other part of the world, or even the Moon, adding to the list of fugitive bank defaulters?

Tamal Bandyopadhyay, a consulting editor with Business Standard, is an author and senior adviser to Jana Small Finance Bank Ltd.