The Museum of Broadway, the first permanent museum dedicated to the history and legacy of New York’s theater industry, will open next summer in Times Square following a delay caused by the Covid pandemic shutdown.

To be located at 145 West 45th Street in Manhattan, the museum is designed as an interactive and immersive experience, with sections showcasing Broadway history, behind-the-scenes elements and “game-changing” shows that redefined Broadway.

Founded by entrepreneur and four-time Tony Award nominated producer Julie Boardman, and Diane Nicoletti, founder of Rubik Marketing, the Museum of Broadway had been scheduled to open last year, but the pandemic necessitated postponement. 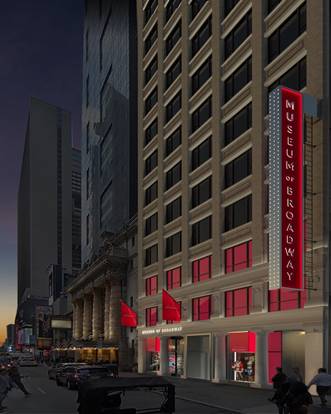 “We are thrilled to create a museum honoring Broadway’s extraordinary history, the trailblazers who pushed the art form forward and celebrate its bright future,” said Boardman in a statement. “We’re delighted to be working closely with members of the theatre community to build an authentic experience that visitors of all ages will enjoy.”

The Museum is founded in collaboration with Playbill, Broadway Cares/Equity Fights AIDS, The Billy Rose Theatre Division at the New York Public Library for the Performing Arts, The Al Hirschfeld Foundation, Concord Theatricals, Goodspeed Musicals and additional partners to be announced soon.

As described by the founders, the Museum will include a visual history of Broadway from its birth to the present day highlighting theater’s pioneers, landmark moments of social change, and many of the most beloved plays and musicals of all time. Key points along the timeline will focus on the pivotal shows that transformed the landscape of Broadway, through immersive installations designed by leading contemporary visual artists and acclaimed Broadway designers. Fans will also go backstage to experience “The Making of a Broadway Show” with a special exhibit honoring the professionals – both onstage and off – behind Broadway plays and musicals.

The Museum of Broadway will also include a retail store, created in partnership with Creative Goods, that will sell show-specific merchandise as well as “bespoke products” from small local businesses.

Tickets for the museum are expected to go on sale later this year.