Bill Carter, a media analyst for CNN, covered the television industry for The New York Times for 25 years, and has written four books on TV, including The Late Shift and The War for Late Night. The opinions expressed in this commentary are his own.

A substantial slice of the nation’s attention has been diverted (riveted, really) to the drama in the offices — and on the stage — of the game show “Jeopardy!”

America’s obsession with the game show and its fall from grace is not surprising. One of the last remaining pillars of compulsive viewing on broadcast TV, “Jeopardy!” is an institution respected by viewers of every ideological, religious, ethnic and taste stripe.

If you’ve spent hours of your weeknights over the past three decades hunched over your dinner in front of a TV, trying, between bites of porkchop, to guess answers to a fusillade of questions about world history, Shakespearean characters and potent potables, always comfortable in the classy and expert company of Alex Trebek, the last thing you want to think about is yet another election controversy.

But that’s what the executives at Sony Pictures Television delivered, with what looked to all of the show’s fans like a bogus round of tryouts followed by the naming of the show’s executive producer, Mike Richards, as the new host. Even before the offensive comments he made in the past resurfaced, his selection raised hackles.
Why? Because so many Americans have grown up with “Jeopardy!”, fantasized that they could compete on the show, and just plain marveled at the breadth of “knowledge” (some trivial, some substantive) of “Jeopardy!” winners. And coming at dinner time, it has been the perfect comfort food.

I am old enough to remember the original ’60s and ’70s daytime version of the show, hosted by a guy named Art Fleming, who was the gold standard quiz host in his day. The show started out in black and white, the big board was really primitive and the winnings were truly paltry. (The easiest questions were worth a big 10 bucks.)
From the start, the game worked as entertainment, with none of the silliness of other contemporary game shows, like “Let’s Make a Deal” or “Supermarket Sweep.” It also never had a hint of the kind of scandals that blew up previous quiz shows like “The $64,000 Question.” (Who was going to cheat to get a 10-buck question, right?)
“Jeopardy!”‘s revival under Trebek was a brilliant update — flashier in presentation, more puckish with categories, bigger winnings, and with an airtime during many people’s dinner hour. 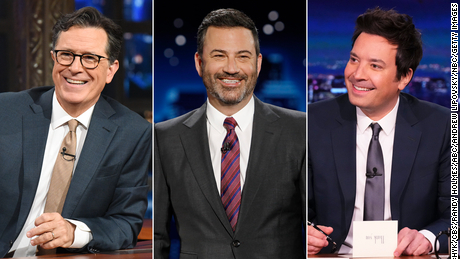 When I would watch with my kids when they were young, they marveled at how many times I got the answer (in the form of a question). They would urge me to go on the show myself. I demurred, saying because I covered the TV business, I couldn’t participate in something where I might win big money. (The other truth was I could foresee the night I appeared and the categories were all Opera, Flowers, Famous Bowlers and Country Music banjoists, and my rep at home would be ruined.)
I suspect most fans of “Jeopardy!” have similar memories of the show. Of course, that meant they would be invested in who would win the “audition” to replace Trebek. The tryout list was staggering in its range; so was how willing most of the candidates were to commit to a new career as gameshow host.
Then Sony decided to install a virtual unknown, with no constituency, who was the show’s executive producer. And some great reporting by The Ringer’s Claire McNear revealed he was trafficking in misogyny, anti-Semitic and other moronic comments earlier in his career.

As far as moves to replace a TV legend go, this botch-job elevated Sony to the level of NBC during its Johnny Carson succession debacle.
In the process, the show’s executives sullied a precious television gem, and riled millions of a hit show’s fans and, in doing so, ‘Jeopardy!’ now lives in a category of its own: “I’ll take Self-Inflicted Fiascos for two-thousand, Alex.”
Source: Read Full Article