STURGIS, Mich. – A virtual preliminary examination in Michigan was interrupted last week after the defendant was found to be at the same home as an alleged victim of assault while the hearing took place.

Coby James Harris, 21, had gone before St. Joseph County District Court on March 2, accused of assault with intent to commit bodily harm less than murder, stemming from an incident Feb. 9 in Sturgis, Michigan.

The felony charge carries a prison term of up to 10 years for a first offense, and 15 years for a “habitual” offender.

Mary Lindsey, who appeared in the court livestream as the reported victim, said the assault stemmed from a brief argument at a residence in Sturgis. According to Lindsey, she and Harris had been dating at the time. 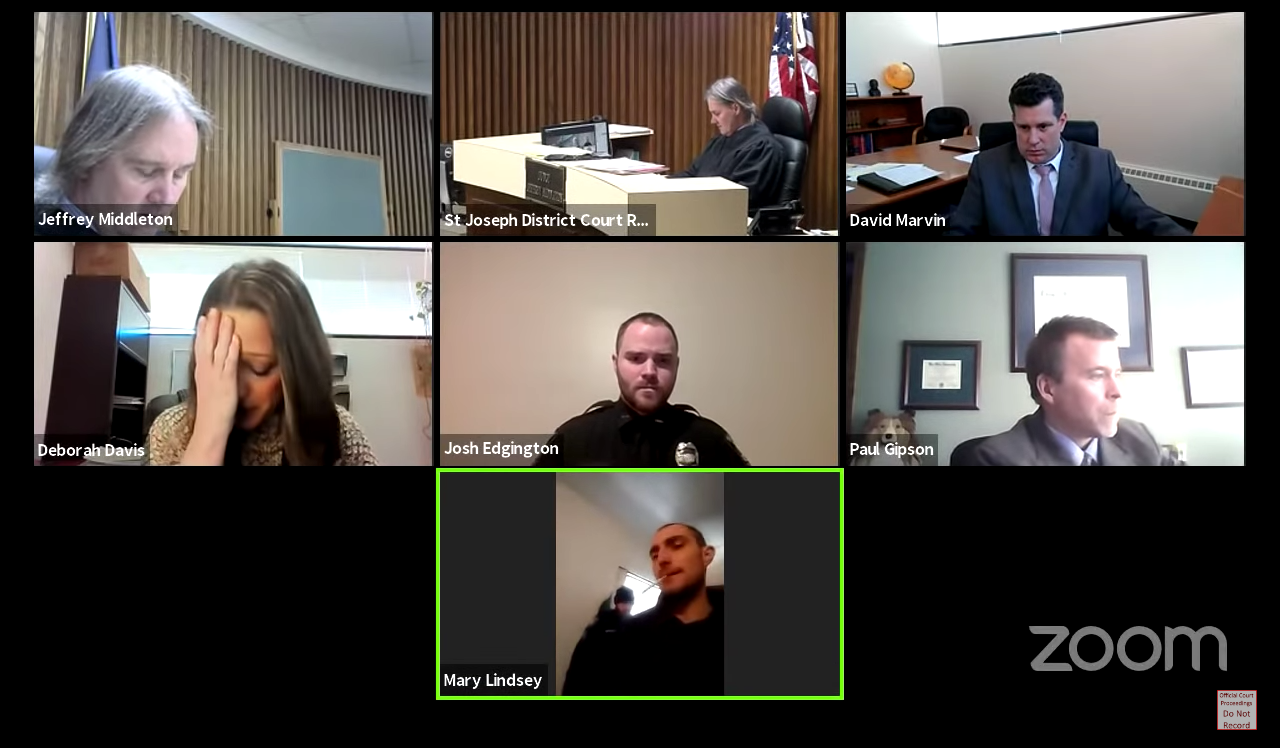 Attorney Deborah Davis, left center, reacts during a livestream court proceeding March 2, after it was confirmed the defendant in an assault case was at the same house as the alleged victim, during the live hearing. Davis made her suspicion known to the court during the preliminary examination, after noting the witness' body language. (Photo: Provided)

About seven minutes into the proceeding, Deborah Davis, assistant to the prosecuting attorney and representing Lindsey, said she believed Lindsey and Harris were in close proximity during the livestream, based on Lindsey’s answers and body language.

“Your Honor … I have reason to believe that the defendant is in the same apartment as the complaining witness right now, and I am extremely scared for her safety,” Davis said. “The fact that she’s looking off to the side and he’s moving around, I want some confirmation that she is safe before we continue.”

Middleton asked Lindsey where she was at that moment.

“Um, I’m at a house,” Lindsey said, with hesitation, giving an address in Sturgis.

Middleton then asked Harris to divulge the address where he was. Harris gave a different house number.

‘Mr. Harris, my advice is, don’t say anything else’

Middleton told Harris to go outside with his cell-phone and take a photograph of the house number. Harris declined, saying he was limited by low phone battery and that his device was connected to a charger.

A few moments later, Davis said the police were at the door of Lindsey’s confirmed location to check on her. Lindsey was instructed to go to the door to speak to police.

“We may need to adjourn this, your Honor,” Davis said to Middleton.

Lindsey’s connection to the court proceeding went offline after it showed her speaking to police outside the home. Moments later, Lindsey’s livestream came back online, showing Harris inside on Lindsey’s phone and in the custody of police. Davis briefly “face-palmed” upon the reveal that Harris was at the same location as Lindsey.

“Your Honor, me and Mary both don’t want the no-contact,” Harris said. “I ask that be dropped. I’m sorry I lied to you. I knew the cops were outside. I don’t know why I…”

“Mr. Harris, my advice is, don’t say anything else,” Middleton said to Harris. “The hearing is adjourned. Your bond is canceled. If you have $10 million, you can’t bond out. In addition, the prosecutor’s probably also going to charge you with obstruction of justice.”

Middleton told Lindsey she was “in a very difficult position there … “(Harris) may have some new charges.”

Middleton said the situation was “a first” for him.

“This is an issue we didn’t have when we were having live court … This is the first time, to my knowledge … that this has occurred,” Middleton said. “Kudos to the Sturgis Police Department for following up on this.”

“That’s the first time I ever had anybody sitting in the next room potentially intimidating a witness to assault,” Middleton said.

Harris was lodged at the St. Joseph County jail. The hearing was rescheduled for March 16.

$1,400 checks are coming in the new coronavirus relief bill: Here’s who will get them, and who won’t