The only models that are imported (they have limited volumes but high value) are the Apple 12 Pro and Pro Max. 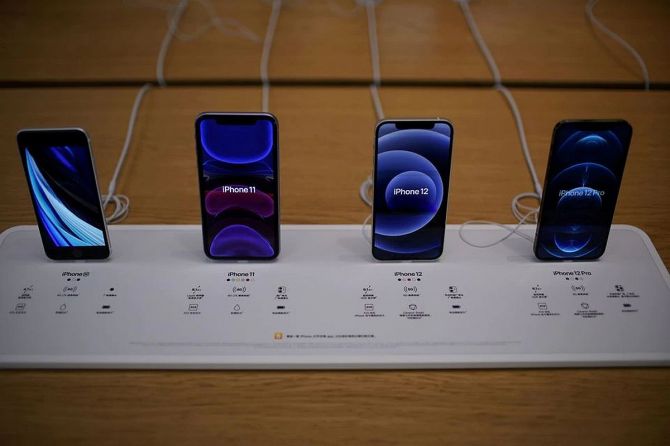 In a major push towards ‘Make in India’, Apple Inc is manufacturing 70 per cent of the mobile phones, in value terms, that it sells in the domestic market, in India, according to sources aware of the development.

This is a sharp rise from the figure of 30 per cent just two years ago and marks a major shift in Apple’s strategy following the government’s Production Linked Incentive (PLI) scheme that kicked off in FY’21.

One of Apple’s three vendors here, Foxconn, is currently manufacturing the best-selling model, the Apple 11, along with the Apple 10 and the Apple 12.

Another contract manufacturer, Wistron, makes the Apple SE 2020. (The third, Pegatron, has yet to start production).

The only models that are imported (they have limited volumes but high value) are the Apple 12 Pro and Pro Max.

An Apple spokesperson did not respond to queries sent to them.

Faisal Kawoosa, founder of Techarc which tracks volume production, says that in 2017, the volume of Apple phones made in India as a percentage of the total sold here stood at only 5 per cent.

According to sources in the know, Apple value addition in the country for mobile devices currently was around 15 per cent.

However, the three contract manufacturers have committed to the government that they will raise this figure to 30 per cent in five years under the PLI scheme.

To provide a reference point, Apple’s value addition in China is around 40-45 per cent.

Sources aware of the development say that the value addition committed by the vendors collectively is clearly achievable as Apple is already in talks to strike component deals with Indian companies through its vendors.

One such move which is under discussion is a tie up with the newly floated Tata Electronics which is investing Rs 4,700 crore to set up a mobile component manufacturing plant in Tamil Nadu.

Analysts say that Apple has shown a growing tendency to reduce the gap between the launch of a new model in India and its manufacture here.

By way of example, they point out that the company started its manufacturing in India with the Apple SE in 2017 when the phone was already a couple of years old.

The Apple 11 was launched in September 2019 in India and started being manufactured here in July 2020.

The Apple SE 2020 was launched here in April 2020 and started being manufactured within just three to four months.

The latest model, the Apple 12, was launched last October and was made here within less than six months, despite the pandemic and its challenges.

According to industry estimates, based on current trends, experts say that the company will hit revenues of $3 billion in India by the end of its fiscal year which has just ended in September.

That represents a substantial growth over the last year’s fiscal in India when it was less than $2 billion.

However, despite the sharp increase, India still accounts for less than 1 per cent of Apple’s global revenue which is expected to hit $330-$340 billion.

Apple has identified India as a key country in its plans to reduce its dependence on China, where 90 per cent of its devices are made, as a manufacturing hub for exports.

That is why its vendors are participating in the PLI scheme which gives Apple a 4-6 per cent incentive, provided it meets the investment and production targets.

Under the scheme, Apple’s contract manufacturers have made a commitment to make Rs 3.4 trillion value of iPhones in India in five years, out of which 80 per cent will be exported in the same period.

The vendors have already invested more than half of the Rs 3,000 crore they are required to do during this period, despite the fact that Pegatron has not even started production yet.