Overall, however, on-location production of films, TV shows and commercials was down in November compared with October, according FilmLA, the City and County’s film permit office.

“The November decrease in production reflects the ongoing complexity of the moment,” said FilmLA president Paul Audley. “At this point, progress for production rests, like so many things, on effective community control of Covid-19. The Greater Los Angeles filmmaking community, so fortunate to be able to remain working, continues to be mindful of safe set rules.”

Audley said that he expects on-location filming to “remain fairly flat through the end of the year. We’ve come to a place, absent holiday weekends, where we don’t see any huge spikes coming anytime soon. We’re probably going to see this through the winter months until we see people getting vaccinations and some of the restrictions lifted,” he said. 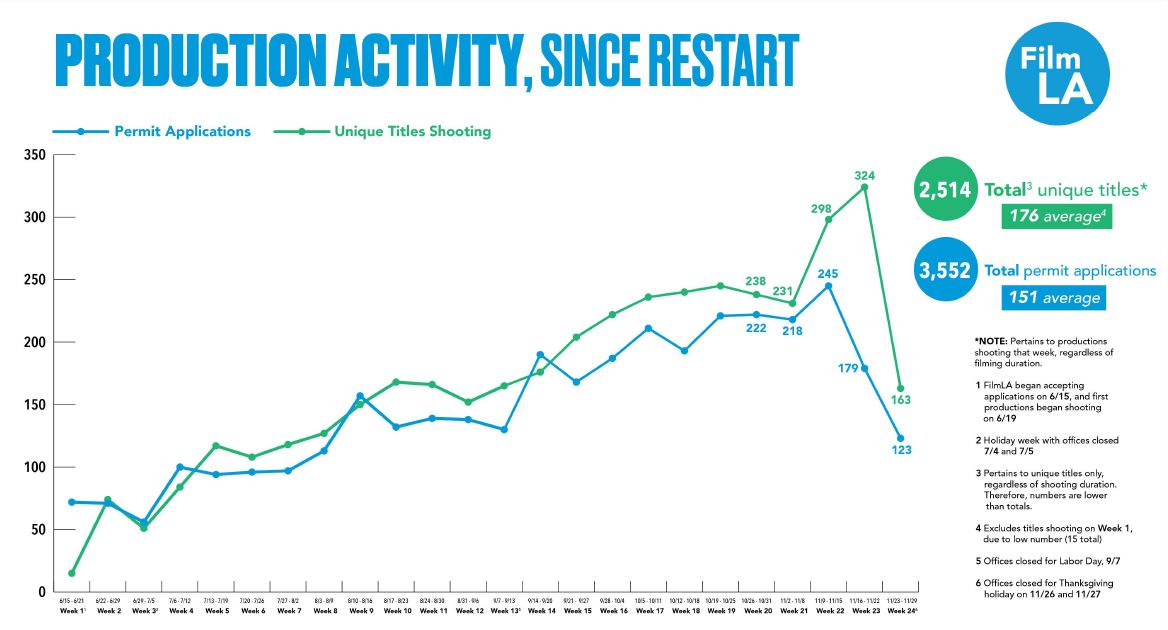 Most of the movies shooting around town last month were indie films, such as Miramax’s He’s All That, BCDF Pictures’ To Leslie, Jacqfro Productions’ Story of Women and Bow Tie Productions’ Rescue Rangers. Paul Thomas Anderson’s Soggy Bottom also filmed throughout the region last month.

The ad industry continues to be the leader in film permits issued, with still photography and commercials making up 44% of November permit requests. Production of television shows represented the next-largest share of recent permit activity, at 29%.

Since the reopening of LA County to on-location filming in June, FilmLA said it has received roughly 3,550 film permit applications spanning 2,514 unique projects. But for the first time since production resumed, month-over-month permit volume decreased in November, with applications decreasing 7.6% to 813 permits – down from 880 permits in October. “Analysts point to overlapping factors,” FilmLA said, “including the 2020 election, the Thanksgiving holiday, and the Covid-19 pandemic as reasons for the slowdown.”

FilmLA data does not include production that occurs on certified soundstages or on-location in jurisdictions not served by the agency.