Kroger employees are blasting the company for taking away a $2-per-hour “hero” bonus for working during the pandemic, foreshadowing the criticism other employers may face as they try to end pay increases related to the coronavirus.

The grocery chain put the hazard pay premium in place on March 29 and phased it out on May 16 after an earlier extension. Workers say their hourly pay is dropping now even though they still face the same deadly virus every time they clock in.

“For them to take away the hazard pay … I think really is unjustified,” said Debbie Griffin, a Kroger cashier in Lawrenceburg, Indiana. “We put ourselves on the line every day. We don’t know who’s coming in that store.”

Griffin spoke on a call with reporters Wednesday hosted by her union, the United Food and Commercial Workers, which represents employees at Kroger stores around the country.

Marc Perrone, the union’s president, said several other chains where its members work have extended their pandemic pay premiums, including Albertsons, Safeway and Stop & Shop. The union represents around 900,000 grocery employees.

“The pay cut is being implemented even though the grocery workers are still dying and not a single state, major city or county has returned us to anything resembling the pre-COVID-19 normal,” Perrone said. “These workers did not stop becoming heroes on one particular day. … They don’t deserve less of our appreciation, because they’re still going out there each and every day.”

A Kroger spokesperson said the company gave a separate one-time bonus payment to employees on May 15 ― $400 for full-timers and $200 for part-timers. That came on top of a similar bonus payment early in the pandemic, of either $300 or $150. Those payouts, which were separate from the $2 premium, were to ”acknowledge their dedication to maintaining safe, clean and stocked stores.”

“We will continue to listen to our associates and take steps to ensure their safety and well-being,” the spokesperson said in an email.

Essential workers of all kinds have been asking for hazard pay to compensate for the unusual risk of working during a pandemic. Many companies in food, retail and meatpacking have offered small, temporary pay increases of around $2, and sometimes thrown in one-time payments like Kroger’s. Very few employers seem to have implemented the time-and-half or double-time pay that many workers say the pandemic calls for.

Democrats in Congress have called for government-funded hazard pay for front-line workers during the pandemic. The proposal would give qualifying workers an extra $13 per hour, but few Republicans aside from Sen. Mitt Romney (Utah) seem interested in hashing out a plan.

That has left it to private employers to provide the pay increases their workers are expecting. The criticism aimed at Kroger shows how tricky it may be for them to strip away what modest increases they’ve made, particularly as the U.S. death count due to COVID-10 is still rising toward 100,000, though at a slower rate than in previous weeks. 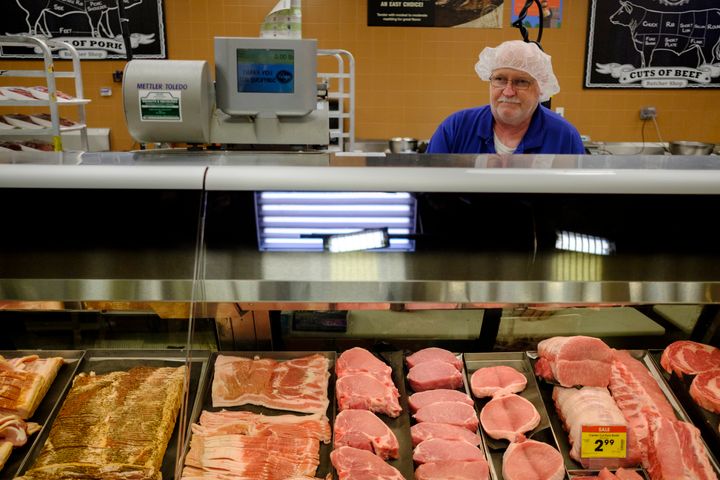 Target announced this week that it will extend its $2 bonus through the July 4 holiday. Amazon and its subsidiary Whole Foods are keeping their $2 premium in place until June, although public pressure could force the company to reevaluate.

Ending the pay hikes may be especially thorny at unionized chains like Kroger, where job protections embolden workers to speak out. Four workers on the UFCW call Wednesday criticized the company for its decision and called on it to reassess.

“I don’t understand it. I can’t agree with it,” said Steven Brown, who works at a Kroger in Columbus, Ohio. “And I can already see the decrease in morale in the co-workers I’ve known for years in such a short time. I’d ask you to reconsider that, Kroger.”

“We’re not heroes; we’re sacrificing,” said Kristine Holtham, who works in a Kroger meat department in Lansing, Michigan. “This is a risk we are [taking]. We deserve hazard pay until I no longer have to put on a mask to work at a grocery store.”

Holtham said the stress of working during the pandemic has not let up, especially as protesters have politicized the use of face coverings. She said she used to politely offer a mask to shoppers who weren’t wearing one, and most would gracefully accept it. But now she is afraid to even bring up the subject, after reports of verbal and physical assaults on workers trying to enforce social distancing.

“Now masks have become a political war,” Holtham said. “Employees are downright scared and afraid to tell somebody to put on a mask because of retaliation.”

The UFCW has been keeping a tally of grocery store workers who have died of COVID-19 since the pandemic began. The union said Wednesday that 68 of its members who work in grocery stores had died, and estimated that nearly 10,000 had been sick with or exposed to the coronavirus. The numbers would be greater for the industry as a whole because the union only represents workers at some chains.