The Centre’s decision to not reduce the face value of shares of India’s Crown Jewel — Life Insurance Corporation (LIC) — was taken to make shareholders feel they are acquiring something ‘precious’. 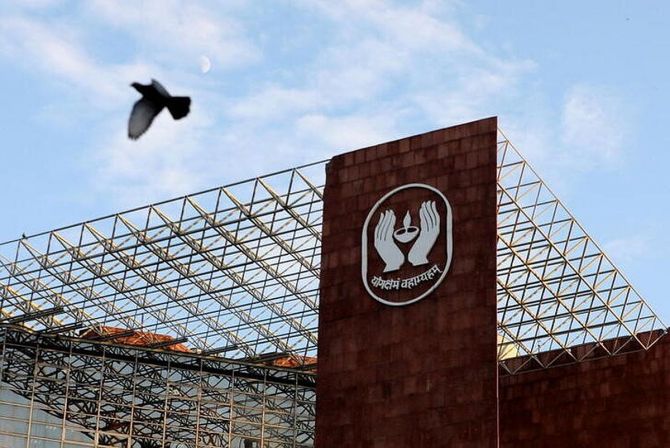 The face value of LIC’s shares was retained at Rs 10, quoted in the draft prospectus, as it would also align the insurer’s shares with those of its private sector peers.

Even as the LIC Act was amended to “consolidate or reduce the nominal or face value of the shares”, with the Centre’s approval, it was decided to stick to the current face value of shares at Rs 10 without splitting the existing 6.32 billion shares.

Reducing the face value of LIC’s shares would have made its price attractive, especially for retail investors, and its over 10 million eligible policyholders.

The case for reducing the face value of LIC’s shares was made to make it a favourable bet for retail investors. However, it decided to go ahead without reducing the value of LIC shares during the initial public offering (IPO), and leave the option open for the LIC management to decide on a stock split in future.

Since the market is expecting the issue size of the government’s 5 per cent equity at Rs 65,000 crore in the IPO, at this valuation, the shares of LIC may be priced at least Rs 2,056 apiece.

The government has held several discussions on reducing the face value of LIC’s shares to Rs 1.

That would expand its equity base 10x, in turn, reducing the offer price of the insurer’s shares in its IPO.

But it was decided that the pricing of shares would make shareholders feel they are buying something ‘precious’, on a perception level, and would price them just like its private sector peers HDFC Life, ICICI Prudential Life Insurance, and SBI Life.

This would help investors gauge LIC’s worth and get a premium.

Retail investors understand the market and the premium the largest insurer would command, compared to its peers, said the official.

Pricing alone will not be a factor for investing.

Investors will also look at its market share and growth prospects, said the official quoted earlier.

Comparing LIC’s listing with the IPO of State Bank of India (SBI), Agarwal said retail investors would want LIC shares in their portfolio — just as investors were keen to invest in SBI back in the 1990s.

“Irrespective of pricing, the retail quota of LIC will be oversubscribed,” said Agarwal, adding, “But after listing, retail participation in the daily market trade may be limited as they would find it difficult to invest in such a heavy stock.”

Jyoti Prakash Gadia, managing director at Resurgent India, said, “From a trading point of view, investors prefer investing in shares that are priced lower, but in IPOs, retail investors think about investments in absolute terms or in lot sizes.”

The LIC IPO will restore retail investor confidence in the market after having lost money in the IPOs of loss-making new-age companies, he added.

“The listing of LIC will act as a market barometer. It may also act as a benchmark for investing in IPOs of public sector companies, as well as other companies,” said Gadia.

Timing, valuation, and listing price will set the trend for the market in future, he added.

The Centre is vouching on retail investor participation since it has reserved 10 per cent of the issue for its policyholders, and has seen around 10.2 million demat accounts being linked with policies — a precondition to avail of policyholders’ reservation.

LIC had launched ‘it’s best in life to be prepared’ campaign, asking policyholders to upload their personal details and permanent account number, and to open a demat account to subscribe to the insurer’s offer.

The government is also planning to offer shares of LIC to its policyholders at a discount, so that they continue their association with the insurer — now also as a shareholder.