LIC identifies the problems well, but what the markets will watch is how nimble it is with the solutions, explains Subhomoy Bhattacharjee. 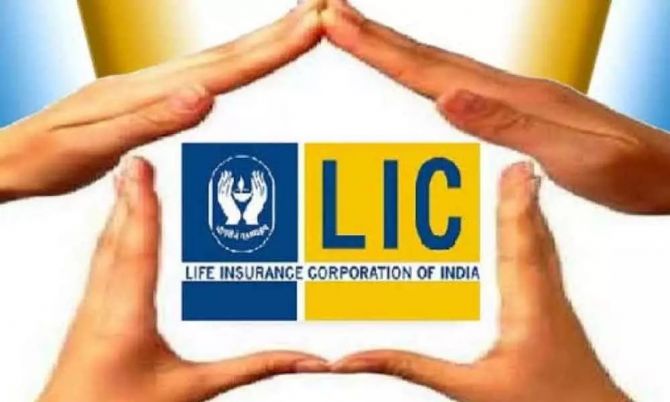 The risks emerging for LIC, from which the government plans to sell 5 per cent of its stake, are that its strengths do not address the expanding opportunities in the Indian insurance sector.

The brand LIC may have been recognised as the third strongest and the 10th most valuable global insurance brand in 2021 by Brand Finance but millennials, the biggest buyers of insurance, are looking elsewhere.

A reading of the draft red herring prospectus (DRHP) of India’s largest life insurance company with a market share of 64.1 per cent gross written premium (GWP) is, therefore, somewhat worrying.

Of every individual life cover sold in India in the past five years, LIC accounted for only 50 per cent from 56 per cent in 2016.

Even among the products sold, it is the single-premium policies where LIC is the boss.

In other words, those who pay premiums annually prefer the private sector companies, which offer easy to use digital channels.

But it is the companies next in line that are reading the growth story better, as the DRHP itself points out.

This will not help, however, since the LIC straddles the Indian market as a giant.

Nowhere in the top seven markets globally is the difference in market share between the largest and the second largest life insurer as stark as in India.

SBI Life has a GWP of 8 per cent, Bajaj Allianz and HDFC Life come even lower (please see table 1).

LIC identifies the problems well in its DRHP, but what the markets will watch is how nimble it is with the solutions.

As of now, the indications are not encouraging.

For instance, since the company was busy restructuring itself for the IPO, it was unable to respond to a mandatory order from the insurance regulator during the Covid crisis to furnish a business continuity plan to manage processes, transactions, reporting and customer services.

LIC was the only large life insurer not to respond. The lesson is clear.

The company has problems pivoting rapidly to respond to crises or opportunities. 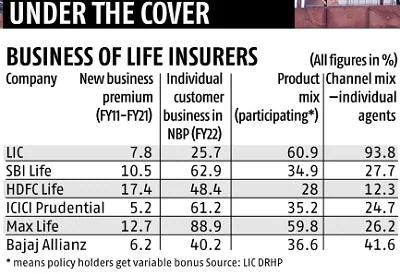 Of LIC’s huge agency population, bigger than the combined agency force of all other life insurers, only two-thirds had sold even one policy in FY21.

Of course, it was a Covid-wrecked year, but the problems are not short term.

The median number for its top five competitors was more than three times larger at Rs 96,619.

LIC depends on its agents to sell 94 per cent of its policies, and to keep them interested it can only touch the digital opportunities sparingly.

Despite the army of agents, LIC’s share of new business premium from individuals has slipped below 50 per cent in FY21 and for the half year of FY22 it is just 44 per cent.

And those customers are not sticking long term with it.

The persistency ratio, a measure of how long individuals hold on to an insurance policy, shows SBI Life as the industry leader, followed by ICICI Prudential. LIC is in third position.

Yet the company continues to keep faith with its agent channel for securing business.

In the DRHP it argues that only individual agents can establish a personal connection with the customers.

‘They can provide hand holding to these customers, make them understand the various advantages of the policies and differences amongst various products… it becomes important for insurers to have trained individual agents to assist customers while selecting any policy.’

It makes most money from the group premium business where it accounts for 81 per cent of the market and agents hardly count.

The result is between FY16 and FY21 while private insurers’ business grew at an 18 per cent CAGR, LIC grew at half the rate, at 9 per cent.

Post-listing, LIC will also have to turn attention to milking its assets well.

For comparison, LIC’s total assets (debt plus equity) as of September 30, 2021, is more than 3.3 times higher than the total of all private life insurers in India.

The next largest company, SBI Life, has assets under management of Rs 2.4 trillion.

LIC’s total investments in listed equity had a market value of approximately Rs 8 trillion, which represented around 4 per cent of the total market capitalisation of the National Stock Exchange as on March 31, 2021.

But these shareholdings are the result of the government’s penchant for treating LIC as a prop for falling markets, a practice that will need to be pared down once the state insurer is listed. But despite those mammoth sizes, LIC’s net worth for the half year ended September 2022 at Rs 78.2 billion ranks it only fifth in the league of insurers (please see table 2).

The relative differences will make the company less attractive to investors.

Irdai rules also say of the surplus generated by an insurer it has to allocate approximately 10 per cent to shareholders’ account.

The other five in the list did so, but LIC has transferred only 5 per cent to the shareholders’ account in FY21.

If it had done more, the net worth would have eroded further.

There are some other key ratios like value of new business margin that analysts use to understand the industry, which cannot be calculated for LIC because it has just been reorganised.

Those available, like solvency ratio, puts LIC in the back bench among the top six.

Despite those caveats, it would be too much to say that LIC is in trouble.

There is no doubt, however, the IPO has come at just the right time for it to take some very hard decisions on its business plans.