New York (CNN Business)US gasoline prices continue to fall, and they could keep falling, raising the possibility of gas below $3 a gallon in much of the country before the end of the year.

The national average for a gallon of regular gas stood at $3.96 Monday, down only a fraction of a cent from where it stood on Sunday. Still that decline maintained a streak of 62 consecutive days of falling gas prices.
The average national price has fallen $1.06, or 21%, since hitting a record high of $5.02 a gallon on June 14.

The average price is somewhat inflated by some high-priced states, such as California, where the average is $5.37 a gallon. The national median price, which is the price at which half the nation’s gas stations are selling for more and half are selling for less, is down to $3.80 a gallon.

Pretty much every state is enjoying the relief from higher prices. Even in states with high gas prices, such as California, the average price is down more than $1 a gallon since the peak in June.

In 28 states, the average price of regular is now $3.99 or less. Roughly two-thirds of 130,000 gas stations nationwide are selling for less than $4 a gallon. And many are selling for much less than that. About 25% of stations nationwide are selling gas for less than $3.50 a gallon.
As students start to return to school, and the summer driving season comes to an end, the price of gas is likely to decline even further, said Tom Kloza, global head of energy analysis for OPIS, which tracks prices for AAA. He said it’s very possible that by September or October, the national average for regular could be back below the $3.53 a gallon mark where it stood when Russia invaded Ukraine in late February.

And he said wholesale gasoline futures on Monday for November and December deliveries point to retail prices falling to below $3 for many states at the end of the year. But he said there is still a risk that unexpected gas price spikes could derail this good news for drivers.
“We still don’t know what Putin is going to do, or if we’re going to get a hurricane hitting the Gulf Coast,” he said about factors that could send gas prices climbing once again.
The primary driver of the fall in gas prices is the falling prices of oil, which hit a six-month low in trading Monday, as futures fell another 4% on rising concerns about a global recession. Since June 8, oil futures are down between 24% to 28%, depending on which crude benchmark is used.
Recessions can take a huge bite out of demand for oil and gasoline, as people lose jobs and don’t need to commute for work, or pull back on spending and travel less. In 2008, the average gas price plunged 60% between a then record price of $4.11 a gallon in July and the end of that year, as the financial markets meltdown sparked the Great Recession and massive job losses.
Monday’s decline was partly sparked by China’s central bank feeling compelled to cut interest rates due to signs of a slowing economy there.
“The market took this as a bearish signal on the outlook for oil demand,” said Richard Joswick, head of global oil supply analytics at S&P Global Commodity Insights. 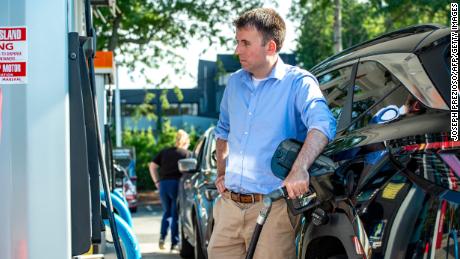 There were also signs that there might be a new deal between the United States and Iran on nuclear weapons, which could clear the way for Iranian oil exports to return to the market. That was a major factor in Monday’s move lower in oil prices, said Kloza. Other experts also see the Iran news as a factor pushing oil prices lower, even if Iranian oil might not start flowing freely until 2023.
“If a deal with Iran is reached, the implications for the oil market and Russia could be far reaching,” Andy Lipow, president of Lipow Oil Associates, wrote in a note on Monday.
Source: Read Full Article