Max Wallace, a former professional boxer with an interest in art, wants to set up his own wellbeing centre. Sunil Jindal plans to set up a Mumsnet for older men while Sharon Thomas has a business model to monetise her “mini artwork” greetings cards.

But these entrepreneurs face one problem: they’re over 50 and although the state pension age rises to 66 on Tuesday, 54-year-old Jindal said they already risk being perceived to be over the hill by everyone from banks to, occasionally, themselves.

“I’ve had a very successful career in computer science, reaching director level, but when my last employer and I went our separate ways in July, I found it a real shock to be back in the job market,” Jindal said.

“I’m applying for jobs but I’m planning my own business too because I can’t help asking myself: ‘Will I find something at my age?’ There’s so much stigma around older people out there and I find I doubt myself too; can I reposition my USP at my age, deal with the technology, sustain the energy?” he added. 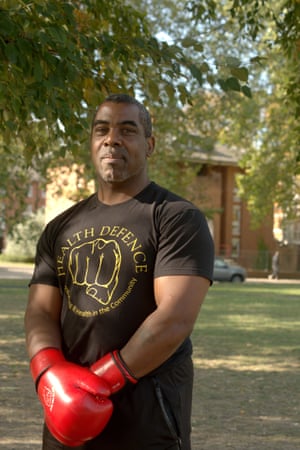 Wallace has no shortage of energy, having set up a community interest company called Health Defence which offers fitness programmes, aimed at “combatting ill health in the community”. He now hopes to open a micro wellbeing centre in Hammersmith, west London, where people can access his boxing/kickboxing fitness programme, along with healthy eating workshops, massages and free health checks.

Around 377,000 older workers – one in 10 male, and eight in 10 female workers in their 50s and 60s – face a significant risk of losing their jobs as the government’s furlough scheme is wound down this month, according to the Centre for Ageing Better and the Learning and Work Institute.

That is in addition to the recent doubling in the number of people over-50s already claiming unemployment-related benefits between March and May. According to an analysis of official data by Rest Less, a jobs, money and lifestyle site for the over-50s, numbers rose from 304,000 in March to 588,000 in June. This means that more over-50s are claiming universal credit than under-25s.

Additional analysis of Department for Work and Pensions data by the Centre for Ageing Better found that over-50s are less likely to bounce back from unemployment than any other age group: just 35% who lose their job return to work “quickly”, with 29% remaining unemployed for more than 12 months.

These statistics are causing concern among experts. Last week, the International Longevity Centre UK (ILC), the UK’s specialist thinktank on the impact of longevity on society, urged the government to introduce a scheme akin to Kickstart but focused on the needs of older workers.

“The long-term growth in employment of those aged over 50 has stalled, with too many people forced out of the workforce too early,” said David Sinclair, ILC director. “These older workers contribute to economic growth but are likely to find it much more difficult than other ages to get themselves another job.”

Andy Briggs, group CEO at Phoenix Group and Government Business Champion for Older Workers, agreed. “We know that if you become unemployed over the age of 50 you are less likely than any other group to get another job.”

Advantages of Age’s founder, Suzanne Noble, said this is a problem for which there are “limited solutions”. Noble, who has co-founded the Startup School for Seniors which launched on Monday, said a move into self-employment is one of the most positive – and realistic – choices available.

“Lack of confidence is the key challenge for this age group,” said Noble, who has also launched Silver Sharers, a website that matches homeowners aged 50-plus with lodgers of any age. “We know, from previous work done with over-50s, that when an older person loses their job it can take a real toll on their mental health.

“If you’ve been working for decades in a career, the expectation is that will deliver you into a comfortable retirement,” she added. “When that outcome is taken away from you, it can be crushing. Many feel that their work experience no longer has any value and that there’s nowhere for them in the modern workplace.”

But that’s simply not the case, said Noble. “Experience is one of the most important USPs of this group, so ignore it at your peril,” she said. “We have a more relaxed attitude to other people and their opinion about us: the No Fucks Given-movement stole the idea from their elders and betters.”

Mark Elliot, Noble’s co-founder of the free, eight-week online Startup School for Seniors – whose 60 participants are aged between 50 to 75 – pointed out that modern technology is easier to use than it ever has been. “If Covid-19 has taught us nothing else, it’s that many more older people have become digitally savvy through using Zoom and other video conferencing software,” he said.

There’s no reason to assume that someone 50-plus hasn’t got the aim or ambition of building a fast-scaling tech business but older entrepreneurs need to be realistic, he said.

“They’re not going to suddenly become Richard Branson – but then, would they want to?” he asked. “On top of what opportunities there are, is the extra question, what sort of opportunities are people this age usually looking for?

With one in five people over 50 being informal carers, flexibility is key, said Elliot. Added to which, older people are often seeking a job that provides them with satisfaction as well as a pay cheque. “At this stage in our lives, we need to build a business that we want to work in ourselves. That’s exciting.”