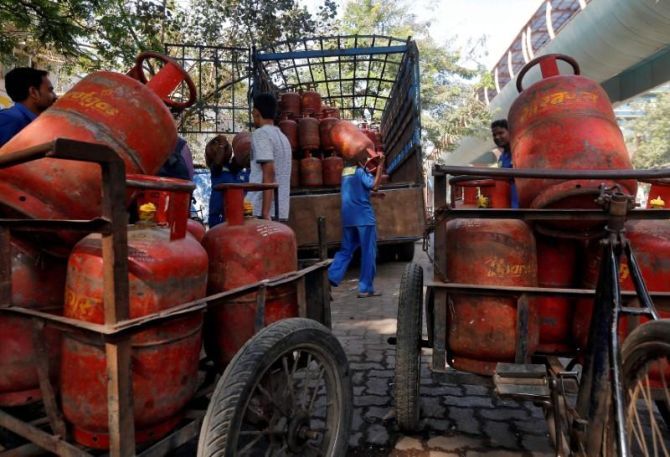 The former will hit the rural poor, households that secured a subsidised LPG connection under the Pradhan Mantri Ujjwala Yojana (PMUY), a programme that was partly instrumental in helping the Bharatiya Janata Party (BJP) win the 2019 general elections.

The latter will pretty much hurt the entire population after it kicks in from October.

Or, perhaps, it’s not as it appears to be, at least on the subsidy front.

First, the government stopped giving subsidies to households on LPG refills from May 2020, just when Covid-19 started infecting Indians.

For the next financial year, LPG subsidies, largely compr­i­sing transport payouts and PMUY costs, have been redu­ced by 11 per cent.

When the Covid-19 pandemic first struck India, the government spent Rs 35,195 crore on subsidies for LPG in FY21, 83 per cent higher than the coming fiscal.

“The provision of fuel subsidy for sensitive petroleum pro­ducts may be inadequate in the case that international prices of crude oil continue to rise and there is resistance from consumers to further price hikes,’’ said Prashant Vasisht, vice president and co-head, corporate ratings, ICRA.

The poor still have rec­o­urse to cheap firewood and biomass and continue to use them when they can’t afford LPG, said M K Surana, chairman, HPCL.

But urban house­holds in most metros do not have a choice.

Given the political heft that LPG enjoys, and the rising discontent ahead of polls in Uttar Pradesh and other states, the Narendra Modi go­v­ernment launched PMUY 2.0 last August covering 10 mi­l­lion additional households.

A free refill and a stove were thrown in compared to an interest-free loan provided for these items in the first edition of PMUY.

The additional sweeteners were necessary because there were several defaults in loan repayments under the first phase, and the high cylinder costs dissuaded the poor from ordering refills.

In 2020-21, the government claimed to have spent Rs 9,235 crore on providing PMUY connections — incurr­ing a connection cost of Rs 1,600 per household — though it had met the 80 million target under PMUY in the previous year.

The refill costs totalled Rs 23,667 crore, with a portion going towards the three free refills provided to the poor as part of the pand­emic stimulus.

A large portion of the subsidy actually went towards plugging the arrears from the previous fiscal.

Subsidies will decline in FY23 because there were very few households remaining to avail of the free LPG offer — the government has budgeted for plans to give new connections to six million house­holds next fiscal.

Transport sub­sidies on re­fills have actually increased by 18 per cent to Rs 4,000 crore.

Demand for LPG rose sharply during the pandemic as households had to cook and eat at home beca­u­se of mobility restrictions.

The Modi government officially maintains that it continues to subsidise refills, though in practice payouts to households stopped in May 2020 (until then households were eligible for up to 12 refills a year at subsidised rates).

If subsidies were available, an av­erage consumer would have received a subsidy of around Rs 300 per refill at the current rate of Rs 900, and the government would have had to spend at least Rs 36,000 crore this fiscal. But consumers received only around Rs 23.

The government started gradually cutting subsidies on LPG from mid-2016 in small monthly installments, by inc­reasing the prices of non-subsidised fuel.

The gradual price ramp-up and lower oil prices reduced the burden on the consumer, and helped cut payouts from over Rs 500 a cyl­inder in 2014 to Rs 162 in April 2020 when the administration closed the subsidy tap.

The cut-off price for giving a subsidy was Rs 600, and when LPG rates crashed following the pandemic to Rs 582 in May, the government found a reason to stop payments, giving a silent burial to the subsidy regime.

Now, however, households must prepare for a hefty rise in LPG prices after Uttar Pradesh votes in March, former finance minister P Chid­ambaram told Business Stan­d­ard in an interview, because Indian Oil, HPCL and BPCL will increase rates to make up for any loss incurred from under-pricing LPG between September and March.

Nom­u­ra said BPCL and IOC incu­rred losses on domestic LPG in the latest quarter. The reasons are obvious. LPG rates at Rs 899 for a 14.2 kg cy­linder in Delhi are unchanged since October when the Saudi cont­ract price (CP) for LPG, the benchmark for India, was $664 a tonne, excluding fre­i­ght, insurance and taxes.

All along, state oil companies kept LPG steady, in line with the wishes of their political masters.

Otherwise, LPG pri­ces would have crossed Rs 1,100 in December.

Vashist estima­tes current rates Rs 70-80 lower than what they should be.

Saudi CP had risen appro­ximately 258 per cent to $846 a tonne in November 2021 from $236 a tonne in April 2020 when the pandemic hit India, Minister of State for Petroleum Rameswar Teli told Parliament.

For domestic LPG, however, the government continues to modulate the effective price to the consumer to insulate the price rise, Teli claimed.

The “modulation” only seems to happen ahead of polls.

For the rest of the term, households are left to fend for themselves.