With the price of a cylinder touching Rs 800, it’s becoming increasingly unaffordable to an already price-sensitive population, threatening to risk one of the most-celebrated campaigns of the Modi regime, reports Twesh Mishra. 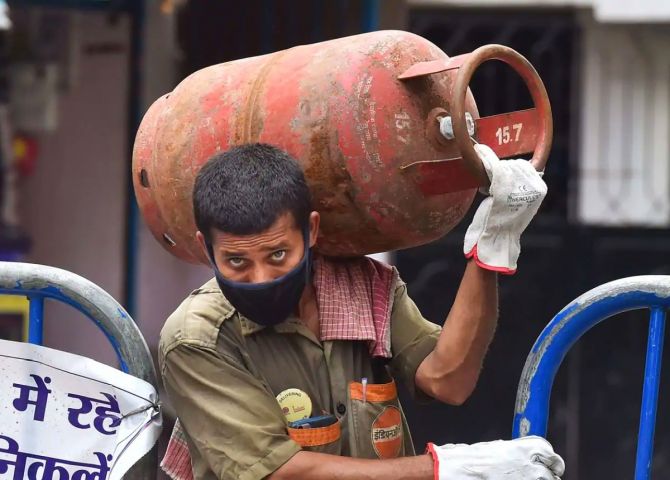 The next phase of the Pradhan Mantri Ujjwala Yojana (PMUY) will kick off in May this year after the Model Code of Conduct (MCC) ends.

The MCC has been in force since February 26, ahead of key assembly elections in West Bengal, Assam, Tamil Nadu, Kerala and Puducherry. It is expected to remain in force till May 4, the last day of polls.

According to senior oil ministry officials, the PMUY scheme is applicable nationwide and requires extensive dissemination.

This is not possible with the MCC being in force, which debars the Centre from introducing and advertising any new welfare schemes that may sway votes in the favour of the ruling party.

This will take the total number of Liquefied Petroleum Gas (LPG, or cooking gas) consumers in the country close to 300 million by March 2022.

Five years after its launch, the scheme seems to have run into a fresh problem: affordability.

With the price of a cylinder touching Rs 800, it’s becoming increasingly unaffordable to an already price-sensitive population, threatening to risk one of the most-celebrated campaigns of the Modi regime.

The government, however, has a solution — aggressively pushing smaller cylinders, an idea re-introduced two years ago with relaxed compliance requirements.

The focus of this leg of the scheme will be on affordability of LPG refills, according to a top oil ministry official, who said this will be in line with the government’s efforts to increase adoption of LPG through a behavioural shift.

In response to queries from Business Standard, Indian Oil Corporation (IOC) said the Union petroleum ministry was in the process of finalising the modalities for adding the 10 million connections.

An oil ministry official said, “We have had meetings with district nodal officers and they have highlighted the issue of people finding it difficult to shell out around Rs 800 per cylinder. This is even though the cylinder lasts around three months, effectively costing around Rs 250 a month. The 5 kg LPG cylinder option may be more viable.”

“The pricing and availability of a 5 kg cylinder needs to be made more comparable to a 14.2 kg cylinder.”

These issues are soon expected to be addressed by increasing the availability of LPG in a 5 kg domestic cylinder that costs around Rs 60 per kg. 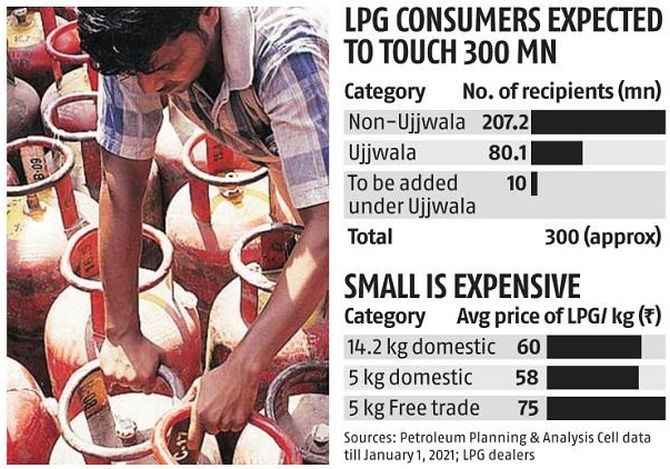 Under the scheme, the Centre bears the cost of the connection.

But for public sector oil marketing companies (OMCs), that are responsible for supplying the deposit-free connection — along with a 14.2 kg cylinder and a stove — things are getting difficult.

The interest-free loans are given to beneficiaries by OMCs, covering the upfront cost of Rs 1,600 per connection.

According to officials in the know, the three OMCs are waiting to recover around Rs 4,500 crore from PMUY beneficiaries.

In addition to this, “IOC is yet to receive Rs 8.52 crore from the government,” the company added.

Beneficiaries buy LPG cylinders at full cost and oil companies recover the loaned amount from the subsidy that is accrued on cylinders.

This makes the cylinder unaffordable to a large chunk of beneficiaries who tend to use them sparingly. They often revert to biomass for their primary cooking needs.

On an average, PMUY beneficiaries use three cylinders in a year.

This is less than half the usage of non-PMUY cooking gas connection users.

The low number of refills makes it difficult for the OMCs to recover the loan amount.

To improve affordability of cylinders, OMCs deferred recovery of loans for up to six-cylinder refills from March 2018.

“The Centre had initially asked oil firms to defer the recovery of loans for six months, and then extended this by a year. This puts pressure on oil companies who end up paying finance costs on the due amount, even though they are not expected to get any interest on it,” said a former director (finance) at an OMC.

Under the current pricing regime, there is negligible subsidy on cooking gas but higher freight costs, for customers located away from depots, continue to be subsidised by the Centre.

This results in a subsidy of around Rs 20-30 per domestic cylinder that costs upwards of Rs 800 apiece.

IOC said: “Wherever it is available, the subsidy is adjusted against the outstanding loan of the PMUY consumer after a refill is taken.”

But this amount is so small that the companies will take much longer to recover the outstanding loans from beneficiaries. Besides, currently there is negligible subsidy.